Huge Bill Guerin For The PC

Well if you are thinking I pulled some sick, monster, mojo hit then you would be wrong.  If you were thinking I scored some super-rare, rookie, auto, patch, DNA sample card you would also be wrong.

What I did get was in fact huge though.  As in size. 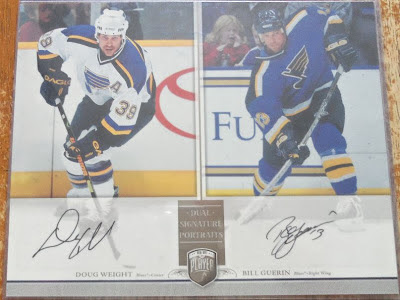 The auction that I bid on said that this was a 2006-07 Upper Deck BAP Dual Signatures of Bill Guerin and Doug Weight.  Here was the auction picture of the card.  Other than the full bleed to the edge on all sides, I didn't really notice anything different about this one.

Then a 9x12 padded mailer showed up at my door.  I wondered what it could have been since I hadn't ordered anything that large or bought any lots that may have to be packaged that way.  Once I opened it, I realized that this was no ordinary card.  It is an 8x10 sized card, almost like a photo.

Here it is against my computer monitor to give you an idea of the size (although you can still see Wayne's giant forehead behind them). 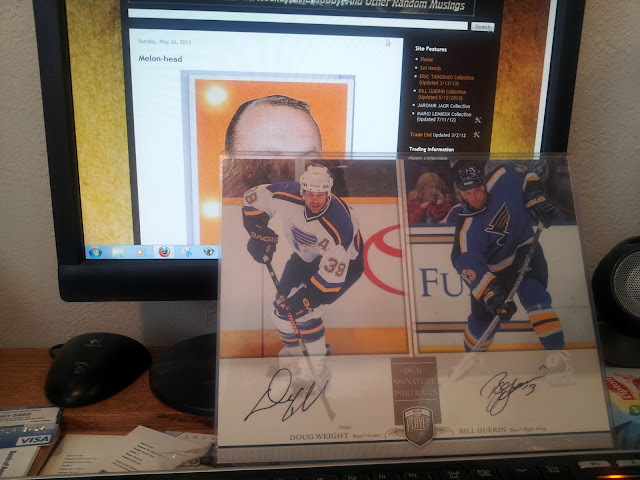 The "card", if you can call it that, is pure awesomeness.  For one, it is a dual auto of two great role players.  Second, it shows Billy G in a St. Louis uniform.  His stint with the Blues was short lived and there are not a lot of cards out there with him wearing Blues digs.  And finally, its another card I don't have in my Billy G. collection.

This Post Brought To You By dogfacedgremlin at 11:56 AM