I've purchased a variety of collections over the years from both collector's and dealers. In most cases, I've only kept the hockey cards and dumped the rest. Usually, boxes aren't sorted and are filled with all sorts of things. When I find the time, sometimes I grab a box and take a look.

Today's interesting find are these... 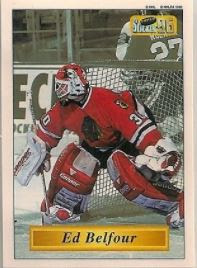 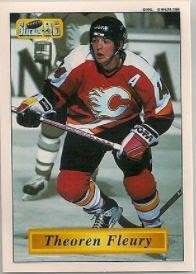 What we have here, in case you had never seen them before (as I hadn't) are 1996 Bashan/Shobtai LTD Imperial Super Stickers. This was a set licensed by the NHL and NHLPA for distribution in January/February of 1996 and could be found mainly in discount stores, mostly in Canada, but supposedly had a limited release in the United States (I haven't been able to verify that though). These were, interestingly enough, manufactured in Israel. Considering there wasn't any recorded hockey taking place in Israel prior to 1986, only 10 years prior to this release, it seems a curious export. But I digress... 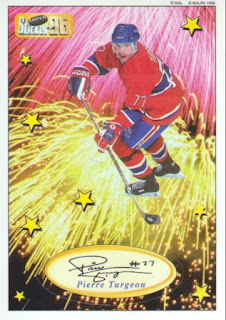 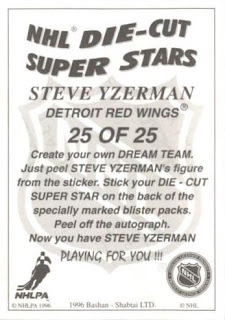 The set contains a total of 161 cards which include 110 regular player stickers, 26 team logo checklists and another 25 Die-Cut insert stickers. 136 of the cards are part of the main set while the 25 die-cuts are numbered separately. The cards measure about the same size as regular cards, (as the manufacturer calls it, "Super Sized") unlike the Panini Album stickers most people are used to. In fact, there wasn't even an album made for these so I imagine they became stuck to lockers, books, walls, drawers, or anything else kids stuck stickers to back then.

From what I can tell, packs were sold for about a $1.00-$1.50 each and contained six stickers, including one die-cut.(48 packs in a box). Also in each pack was a stick of the classic, powdery pink gum that every collector loves. You can imagine that over time, the gum became stuck to whichever card it touched. I would think that many of the top cards in packs had to be trashed. 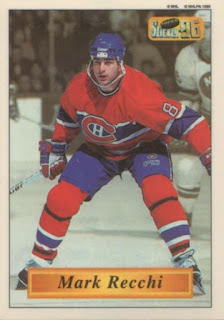 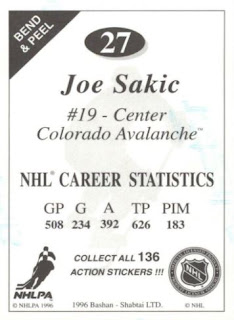 The front of the player sticker features an action shot surrounded by a white border. The player nameplate is located near the bottom of the card in black italic type on a orangish-brown rectangle (printing shades vary on these so orangish-brown was the best i could do). The front also features the NHL and NHLPA trademarks in the border and there is the brand logo either in the top right or left corner of the photo. The team logo stickers feature the 1995-96 team logo as well as a small sticker that features a facsimile signature of one of the players. The fronts of the Die-Cut cards feature players dropped in front of a background of all sorts of fireworks, stars, and explosions. They also include a small facsimile signature of the player on the sticker. 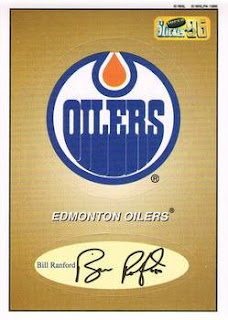 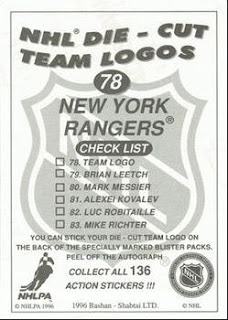 The backs of the player cards are kind of plain but what do you expect for a sticker? The corner has the typical "Bend and Peel" label while the rest of back the card number, player name, number, team, and position. There is also a brief Career Statistics section that shows overall stats of Games Played, Goals, Assists, Points, and Penalty minutes. The team logo stickers feature a checklist of the players featured in the set. The backs of the Die-Cuts feature the player name, the number in the sub-set, and a brief statement telling you to create your "dream team" of players by sticking them together on your mother's refrigerator.

I have quite a few of these with a ton more duplicates. Unfortunately I'm missing quite a few as well. If you are reading this and have any to trade, I'd be happy to oblige. Just another example of one of the many sets produced during the overproduction era of hockey cards.
This Post Brought To You By TheRealDFG at 7:30 PM