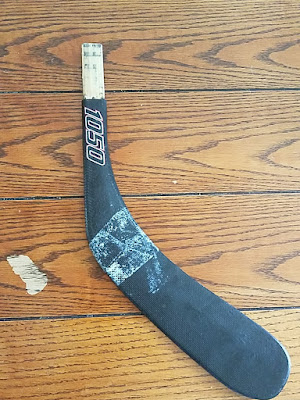 This is a different piece than some that I have in my collection because it's a non-game used hockey stick blade. But not just any stick blade mind you. This belonged (or so my research tells me) to none other than Pittsburgh Penguin and future Hall of Famer Sidney Crosby. 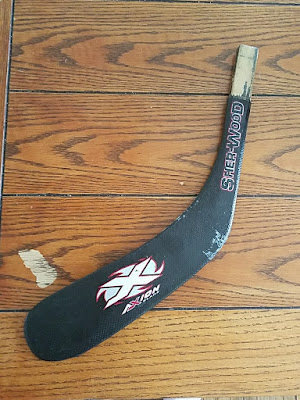 Back during Crosby's rookie campaign, he used Sher-Wood Momentum sticks and would frequently test out different blades to get the right feel. You can see on this one, there was a bit of tape on the blade at one point which leads me to believe it was either marked to be disposed of or it was used, at least temporarily. You'll notice the rest of the tape has been removed and judging by the condition of the logo on the reverse side, it was never fully taped. You can photo match the make, model, and style of the sticks and blades with most photos from the 2005-06 season or beginning of 2006-07. 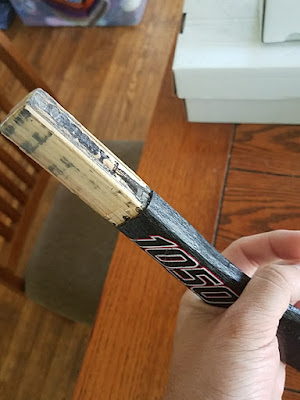 However, I do know that it wasn't used in a game because those get pulled and generally find their way elsewhere. Crosby is notoriously picky about his sticks and uses virtually no curve to the blade. The blade is also stamped with Crosby's name and is considerably scuffed, indicating it did get attached to a shaft at one point or another, most likely in a warm up, practice, or test run.
Regardless, it's a cool piece I picked up at a show a few years back. It now resides above the doorway to the Card Garage and will one day be framed and mounted.
_________________________
Like what you read? Have a comment? Be sure to leave one below.
Check out TheRealDFG on Twitter @therealdfg.
Be sure to check out the latest #PuckJunkPodcast. Just search and subscribe on Apple Podcasts, Google Podcasts, Spotify, iHeartRadio, Stitcher, Podchaser, PocketCasts, Castbox, Castro, Overcast, TuneIn or SoundCloud.
This Post Brought To You By TheRealDFG at 7:00 AM No comments: 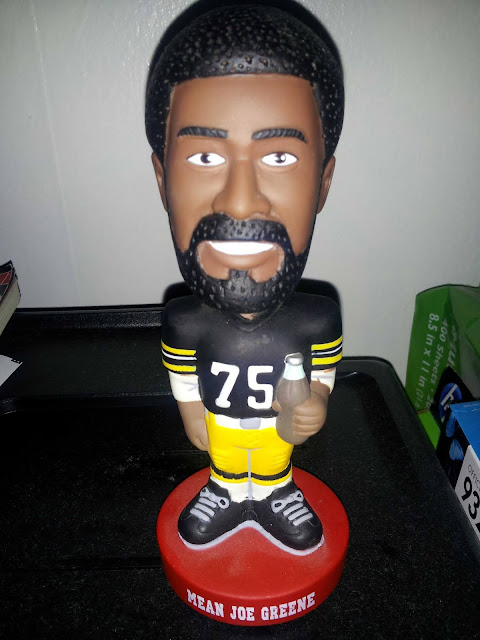 What Pittsburgh Steeler fan's collection would be complete without something referencing the classic Coke commercial featuring "Mean" Joe Greene? The answer? None.
Back in 2003, FunKo Toys teamed up with Coca-Cola to commemorate the iconic TV commercial that featured Mean Joe with their Wacky Wobbler Bobblehead.  The figure features the likeness of Mean Joe in his #75 Steeler's jersey and he is holding a bottle of Coke in his left hand.  I don't have the box for this, nor did I ever. This was given to me many years ago just like you see it here. It lives on a shelf of other Steelers trinkets in my hobby room/office.
If I did have the box though, you could read the story on the back. It says:
"On October 1, 1979, The Coca-Cola Company released an ad that captivated audiences. "Mean Joe Greene" featured the defensive lineman from the Pittsburgh Steelers, a professional football team, and 12-year-old Tommy Okon.
The ad was filmed at a stadium in New Rochelle, New York. Joe and Tommy performed countless retakes over the three days of filming, with Greene consuming 18 16-ounce bottles of Coca-Cola the final day alone.
The ad was immensely popular, sparking a surge of letters to The Coca-Cola Company. The ad won that year's CLIO advertising awards competition and Greene took home the award for best actor.  The Coca-Cola Company followed the ad up with a promotion to "Win the Shirt off My Back", distributing thousands of replica jerseys to winning entrants.
The Coca-Cola Company repeated the ad's concept in various parts of the world. Brazil, Argentina, and Thailand all produced versions of the commercial following the same plot line but featuring renowned football (soccer) players from each country.
"Mean Joe Greene" then continued its life as a made-for-TV movie airing in 1981. Joe Greene starred in the movie recreating the ad and telling the story of what happened after the ad ended.
_________________________
Like what you read? Have a comment? Be sure to leave one below.
Check out TheRealDFG on Twitter @therealdfg.
Be sure to check out the latest #PuckJunkPodcast. Just search and subscribe on Apple Podcasts, Google Podcasts, Spotify, iHeartRadio, Stitcher, Podchaser, PocketCasts, Castbox, Castro, Overcast, TuneIn or SoundCloud.
This Post Brought To You By TheRealDFG at 7:00 AM No comments:

Better late than never, right?
We finally got our video podcast from the Fall Virtual Sportscard Expo and it's live on Youtube if you want to check it out. Sal and I discuss strange hockey collectibles, well maybe not completely strange especially if you have some of these in your own collections. But strange because we are generally known more for cardboard treasures rather than trinkets and other memorabilia.
From comic books to drink coaster, pucks, photos, cereal boxes, and zombie hockey figures, we cover a lot of ground in just under 40 minutes.  Check it out when you have a few minutes.
_________________________
Like what you read? Have a comment? Be sure to leave one below.
Check out TheRealDFG on Twitter @therealdfg.
Be sure to check out the latest #PuckJunkPodcast. Just search and subscribe on Apple Podcasts, Google Podcasts, Spotify, iHeartRadio, Stitcher, Podchaser, PocketCasts, Castbox, Castro, Overcast, TuneIn or SoundCloud.
This Post Brought To You By TheRealDFG at 6:00 PM No comments: 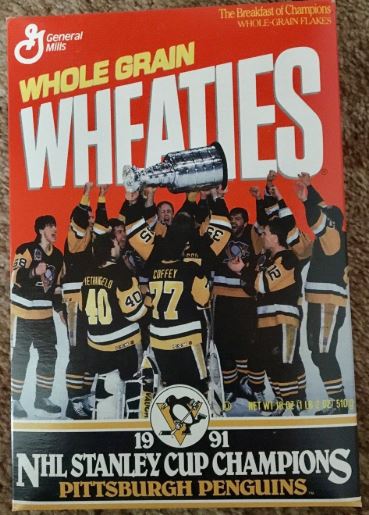 Well this is actually cardboard but not the kind we usually discuss. The first item for this feature is this 1991 NHL Stanley Cup Champions Wheaties box of the Pittsburgh Penguins.  I have had this item in my collection since 1991 when my grandmother gave the box to me. My grandparents were actually the only people I ever knew that bought Wheaties for anything other than to collect the boxes. It was one of my grandma's favorite cereals and I spent many a breakfast growing up eating the Breakfast of Champions. 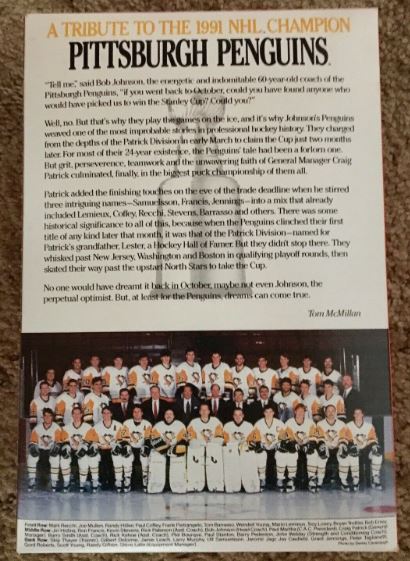 At one point, I still had the cereal in the box but about 20 years ago, I decided to dump the cereal after we had a bit of a rodent problem in the house I lived in at the time. However, the box is intact otherwise and is a nice piece in my collection. It resides on a shelf, high atop my office wall.
_________________________
Like what you read? Have a comment? Be sure to leave one below.
Check out TheRealDFG on Twitter @therealdfg.
Be sure to check out the latest #PuckJunkPodcast. Just search and subscribe on Apple Podcasts, Google Podcasts, Spotify, iHeartRadio, Stitcher, Podchaser, PocketCasts, Castbox, Castro, Overcast, TuneIn or SoundCloud.
This Post Brought To You By TheRealDFG at 7:00 AM No comments: 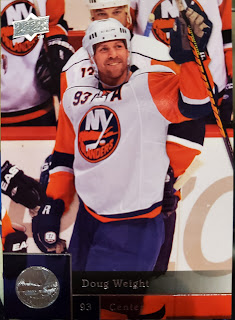 Weight had spent his 17 seasons up to that point shuffled between the Oilers, Blues, Carolina, the Blues again, Anaheim, and then the Islanders.  For New York, he was relied on more in a leadership role, as his offensive production had been in decline.  However, the 2008-09 season saw him put up 38 points, including the milestone 1,000th point that came after a pair of assists.

At the time, Doug was only the 8th American-born player to reach the 1,000 point mark.  He would go on to finish his career with 1,033 points in in 1,238 games, good enough for 77th on the all-time list between Alexander Mogilny and HHOFer Martin St. Louis.

This Post Brought To You By TheRealDFG at 8:00 AM No comments: 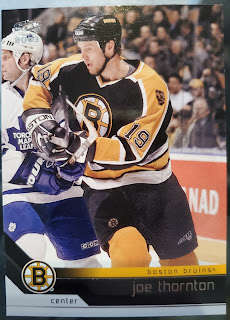 Most people view Jumbo Joe Thornton as a grizzled vet in the waning years of his career. The first overall pick by the Bruins in 1997 has certainly seen a lot in his lengthy career in the NHL.

Flashing back to BB time (before beard)...On December 28, 2001, Joe set a career high by tallying five assists against the Florida Panthers. Just seven days after that, Thornton faced the Washington Capitals and notched a hat trick, plus a helper!

This Post Brought To You By TheRealDFG at 6:30 AM No comments: