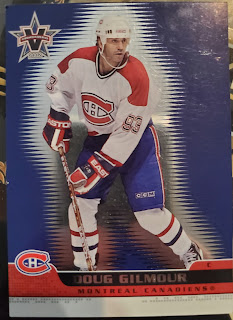 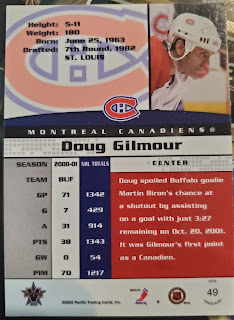 Doug spoiled Buffalo goalie Martin Biron's chance at a shutout by assisting on a goal with just 3:27 remaining on October 20, 2001.  It was Gilmour's first point as a Canadien.
You're thinking...Hall of Famer Doug Gilmour?  A Hab? Doug signed as a free agent in 2001 with Montreal, helping them make the playoffs that year. But at the 2003 trade deadline, he was dealt to the Maple Leafs for a 6th rounder.
_________________________
Like what you read? Have a comment? Be sure to leave one below.
Check out TheRealDFG on Twitter @therealdfg.
Be sure to check out the latest #PuckJunkPodcast.
Just search and subscribe on Apple Podcasts, Google Podcasts, Spotify, iHeartRadio, Stitcher, Podchaser, PocketCasts, Castbox, Castro, Overcast, TuneIn or SoundCloud.
This Post Brought To You By TheRealDFG at 7:00 PM