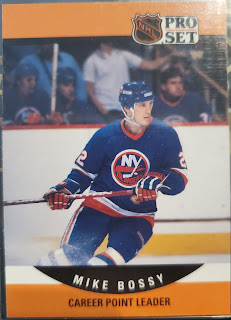 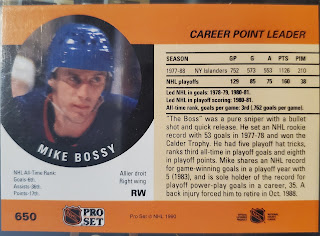 "The Boss" was a pure sniper with a bullet shot and quick release. He set an NHL rookie record with 53 goals in 1977-78 and won the Calder Trophy. He had five playoff hat tricks, ranks third all-time in plyoff goals and eighth in playoff points. Mike shares an NHL record for game-winning goals in a playoff year with 5 (1983), and is sole holder of the record for playoff power-play goals in a career, 35. A back injury forced him to retire October 24, 1988.
Of course, all these stats were as of the printing of the 1990-91 Pro Set cards and there wasn't another young, future HOFer quite ready to break that rookie record yet.
_________________________
Like what you read? Have a comment? Be sure to leave one below.
Check out TheRealDFG on Twitter @therealdfg.
Be sure to check out the latest #PuckJunkPodcast.
Just search and subscribe on Apple Podcasts, Google Podcasts, Spotify, iHeartRadio, Stitcher, Podchaser, PocketCasts, Castbox, Castro, Overcast, TuneIn or SoundCloud.
This Post Brought To You By TheRealDFG at 8:00 AM