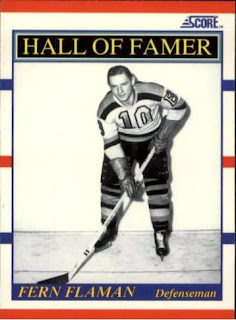 Born on January 25, 1927, Ferdinand Flaman, better known as Fern, was born in Dysart, Saskatchewan.  He grew up to be a rugged defenseman with the Boston Bruins 11 years and the Toronto Maple Leafs for four more, including their 1951 Stanley Cup Champion team.  He played in six All Star Games total through his career.

Fern scored only 34 goals in 910 game, which doesn't seem like much for a player that spent 15 years in the NHL. But that wasn't his job. He specialized in blocking shots and spilling rivals with vicious body checks. No less an authority than Gordie Howe called Fern, "The toughest defenseman I ever played against."

Fern was on the the founders of the NHL Players Associations and, following his retirement as a player in 1961, he coached for 19 years at Northeastern university.  Fern was acclaimed not only for his playing accomplishments but for his contributions to the game, earning a spot in the Hockey Hall of Fame with the Class of 1990.

This Post Brought To You By TheRealDFG at 11:33 AM