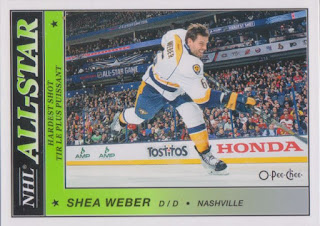 January 24, 2015 at the NHL All Star Skills Competition held the day before the All Star Game in Columbus, Shea Weber won his first hardest shot competition with a blast clocking in at 108.5mph.  The record was set in the previous game held in 2012 by Boston's Zdeno Chara at 108.8mph so this didn't beat a record (there were no All Star Games in 2013 or 2014).

However, it marked Shea's arrival at legendary status when it comes to having a canon blast. He went on to win the contest again in 2016, 2017, and again in 2020. To put his shot into perspective, only three players have rifled shots over 105mph in an All Star Skills Competition: Shea, Zdeno Chara, and Al Iafrate in 1993.