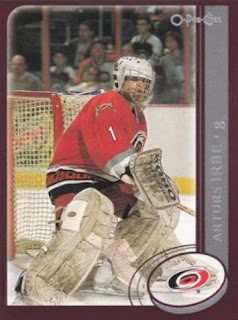 On January 23, 2002, Arturs Irbe appeared in his 500th game in the NHL. That same year, he went on to win his 200th game. This was a feat considering Irbe's journey to the NHL and his career up to that point.

Coming from Latvia, which was still in the heart of the communist controlled Soviet Union, it was virtually impossible for Irbe to play in the NHL. Despite being drafted in 1989 by Minnesota, it wasn't until being re-drafted in 1991 by the San Jose Sharks that he was able to come to North America, where he helped the Sharks to the playoffs.

His quick rise was cut short though as an attack from his dog caused extensive damage to the nerves and tendons in his hands.  A 5" 8" goalie with severe hand injuries is not valued high on most teams need list on their rosters, causing him to bounce around a bit before finding a home in Carolina. He fought back from his injuries, returned to his earlier career form and took the team to the playoffs 3 out of the next 4 years.  He finished his career with 568 games played and 218 wins.