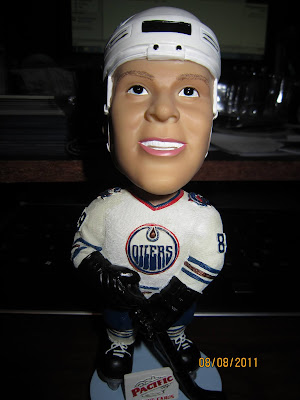 Back in 2002-03 it was a weird time in hockey card collecting. Companies were prevalent with Upper Deck, Topps, In The Game, and Pacific all manufacturing sets and competing for the almighty hobby dollar. But when it came to gimmicks, no one could touch Pacific Trading Cards.
Randomly "inserted" in hobby boxes and made available as redemptions in retail boxes, Pacific gave the literal treatment to its' Head's Up release with ceramic bobble head dolls. With a checklist of 14 players available (12 the previous year), the dolls feature the player in their various team uniforms atop a bluish colored base. The bases have the Pacific logo as well as the player last name. These are supposedly limited to 1,000 dolls of each player. 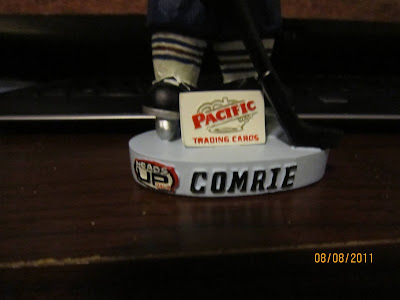 As you can see, I was fortunate enough to pick up a hobby box of this back in 2011 at a show in Chicago from the Atlanta Sportscards guys. My pull was then Oiler, and pre-Mr. Duff, Mike Comrie. Interestingly enough, Comrie was on the checklist the prior year but never was produced.  If anyone pulled the redemption card for him, it was redeemable for another random bobble head replacement. So despite the checklist designation, this Comrie was really his first Pacific bobble head (and last).
_________________________
Like what you read? Have a comment? Be sure to leave one below.
Check out TheRealDFG on Twitter @therealdfg.
Be sure to check out the latest #PuckJunkPodcast. Just search and subscribe on Apple Podcasts, Google Podcasts, Spotify, iHeartRadio, Stitcher, Podchaser, PocketCasts, Castbox, Castro, Overcast, TuneIn or SoundCloud.
This Post Brought To You By TheRealDFG at 7:00 AM