Retail is a crap shoot when looking for "hits".  You luck out once in a while but almost always walk away feeling like you missed something.  That can also be reinforced by a poorly collated pack out for a product or simply a 1:3000 chance at hitting anything. 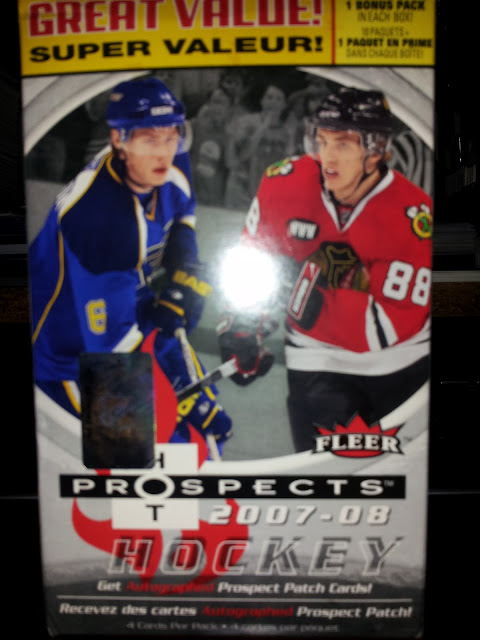 (sorry for the blurry picture.  you get the idea though)

Such was life back in 2007-08 when Upper Deck released the Fleer Hot Prospects set.  These came 4 cards per pack with 11 packs in a blaster box (44 cards).  Sure a hobby box would net you a couple game used cards but good luck finding one of these anywhere now.  And good luck finding them priced at the $7.49 that this blaster was.  Yes, that's $7 and $.49 American. 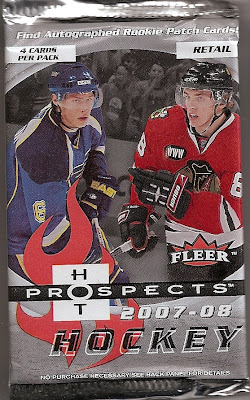 I completed this base set long ago but have always tried to get my hands on some of the Hot Commodities cards, both the Red Hot (#/100) and White Hot (#/10).  There are also regular issue Hot Commodities (#/999), as well as Rookie Auto Patches both regular and SP and Hot Materials cards.  I have never pulled a GU, Patch, Rookie, or White Hot card from a pack.  In fact, of all of this that I opened in my lifetime (and trust me when I say it was a lot!!!) I have only pulled 3 Hot Commodities cards and 1 Red Hot Commodities.  That's how tough these parallels and inserts were.

As I mentioned, the packs contain 4 cards in the retail version.  Most packs had a "decoy" in them back when they were released but you tend to find these in those "discounted" re-pack boxes now, mostly without the "decoy" cards.  As you can see by the photo to the left, the packs look just like the boxes.  They also tell you to "Find Autographed Rookie Patch Cards".  Oh yeah?  How about you find one and give it to me?  As far as I'm concerned, there were never any in here.

When I checked my box break list, I didn't see this one on here so I figured I'd at least add it to my archive and share with everyone.  So here is what I was able to manage pulling from this $.17/card box. 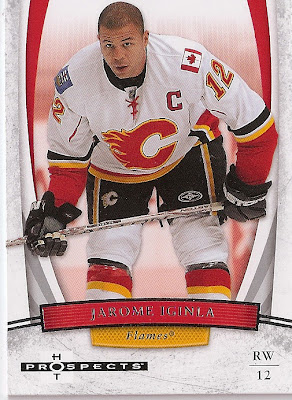 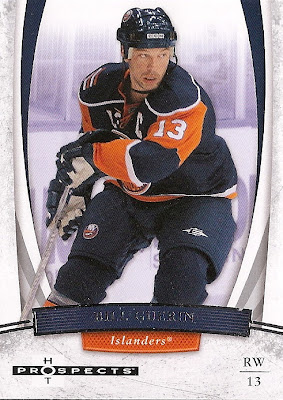 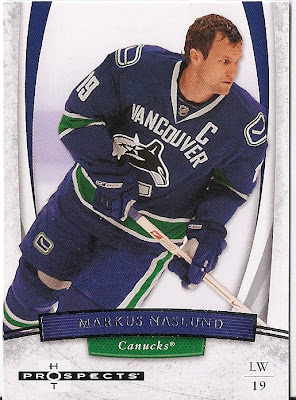 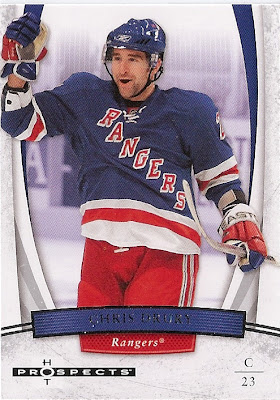 Here is a sampling of what the base cards look like.  Nothing real fancy here.  Just an ice themed border with coloring to match the team.  I can't believe I pulled two doubles out of the same box but then I remembered how poorly collated this product was back then. 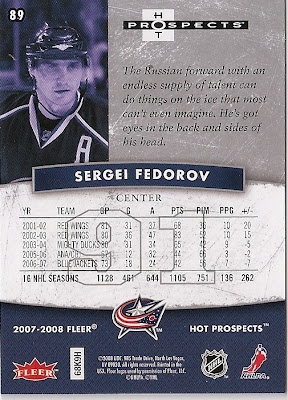 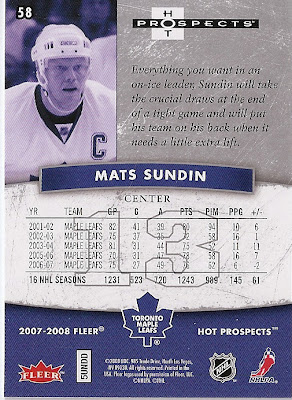 I don't usually scan card backs but figured why not this time.  The backs repeat the photo from the front only washed out in the predominant team color.  There is a quick blurb about the player and, from what I can tell, a maximum of 5 years of career statistics.  It cuts short 11 years for the two gentlemen featured here.  The players number is also sort of watermarked behind the stats.

Well technically that's because there aren't any.  The rookie cards and Hot Commodities are all high numbers in the base set.  I didn't pull any of those, nor did I figure I would. 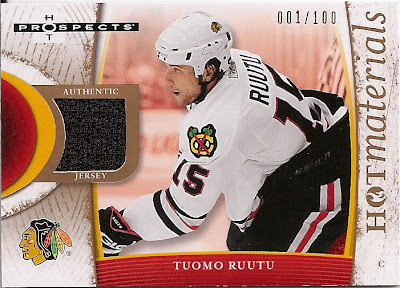 A Game Used card in a retail blaster pack of Hot Prospects???  I'm just as shocked as all of you.  But there it is in all it's glory.  These are numbered #/100 and interestingly enough, this one is number #1 (hey, I could sell this as an "Ebay 1/1"!!!  I know, I know.  I shouldn't even joke about that.)  Unfortunately it's Mr. Tuomo Ruutu and it is a plain black swatch.  You would think that serial numbered #1 cards would have some kind of multi-color or something nice in there for being first.  They would if I was in charge.

So overall, I beat the odds on this one for sure.  I just wish I would have pulled a better GU.  I can't knock the fact that it was out of #/100 though.  The base cards I pulled are all doubles/triples/quadruples or more in some cases so if you know you might need any, by all means let me know and I can try to help you out.
This Post Brought To You By TheRealDFG at 8:49 PM