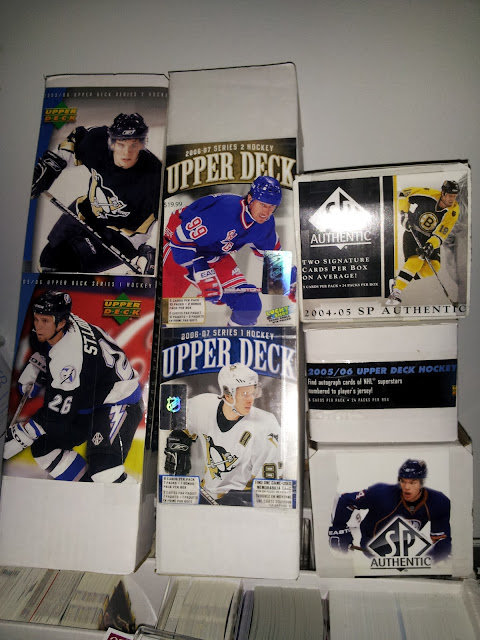 The things in this picture may look familiar to ONE of you out there but to the rest, let me try to explain in the best way I know how...a long, drawn-out, brain drain of a blog post.

I have been on a strange kick these past couple years with my collecting.  I have had my ups and downs just like everyone out there but a couple years ago (or a year, I don't even remember anymore) I fell off my somewhat disciplined collecting wagon and bought a big collection.  It was what was left of two former dealers that had overextended themselves in the late 90s and early 2000s and simply couldn't hang on anymore.  Of course, they were both from Denver so I can't really say how much Broncos and Rockies stuff is in there (but it is A LOT!!!) but nonetheless, it increased my collection 20 fold.  I even attempted to start a blog just about that collection.  That part hasn't come to fruition.  Neither has the goal of unloading it within a year.

About 8 months ago, I picked up another, lesser collection from a guy trying to make some cash during a stint with unemployment.  I made him a decent offer and ended up on the receiving end of another (14) 3500 count boxes of stuff.  There is a ton of basketball stuff in these boxes from what I can tell.  Very few hockey cards, some football, and a decent amount of baseball; but TONS of basketball.  Since I don't follow the NBA, nor collect basketball cards, and basically lost interest after my "heroes" Barkley, Malone, Jordan, and Bird retired, I really have been unmotivated to sort through these.

Fast forward to about 6 months ago, same scenario (unemployment thing) only this time it was for a large, three-row shoebox (are they still called that?) full of hockey memorabilia and autograph cards (I take that back, all but one...there was a Mark Sanchez Rookie Jersey in there too).  Finally...HOCKEY STUFF!!  Again, this is all cardboard I didn't need but what fun it was to sort through? I found some rare Guerin and Jagr GU cards in there as well as some interesting cards from sets I never even knew existed.

April...I think...came another collection.  This time it was another dealer collection from a guy who only did shows and weekend swap meets.  A few years ago he decided to call it quits and started to dump everything.  That was, of course, in a bad financial time for lots of collectors and he couldn't get what he wanted for it.  So he hung on for a while until now when he found a buyer.  Then somehow I ended up with it through a third party transaction and the guy still didn't get what he wanted for it.  This collection is much more sorted and organized than the previous ones but there are also 20 Home Depot cardboard moving boxes (you know the 20x20x18 ones?) full of various sizes of individual count boxes...all marked, numbered, and apparently sorted.  I haven't even begun to pick this one apart yet.

Which brings me to the photo above (I might even be forgetting something in here too).  As many of you know, Voice Of The Collector, and co-host of the internet based Cardboard Connection Radio, Rob Bertrand put out an appeal to the blogging community not so long ago to help him cut his collection down so he could refocus on what he really wanted to go after.  I, being the "high roller" that I now appear to be, piped up on the hockey cards, we worked out a deal, and now I am the proud owner of what you see above.

We have a complete base set of 2005-06 Upper Deck Hockey, featuring a large array of inserts (over 100 in fact) and game used cards, as well as a huge chunk of the Young Guns intact (no, Crosby and Ovechkin aren't there but I still went for it).  I had this on my set needs list but never actually got around to adding what I wanted.  Now, my work is definitely been diminished.

We have a mostly complete 2006-07 Upper Deck Hockey set (about 30 cards or less short), again complete with a large array of inserts (over 30) and game used cards with a big pile of Young Guns to go with them.  I'm not sure I have the missing ones since I don't have a ton of 2006-07 stuff but I'm sure I have a few.

There is also a 2004-05 SP Authentic Hockey base set with a few of the All-Worlds thrown in.  I didn't have any cards from this set at all before getting these.  In fact, I had never even seen them before.  2004-05 was one of those voided years in collector's heads because of the lockout.  There were only a handful of sets produced by ITG, Upper Deck, and Pacific at the time.  I wouldn't mind finding some of those Young Guns Legends SPs from the flagship Upper Deck set though.

And finally, we have an almost complete base 2010-11 SP Authentic base set with, (even though I already knew, I'm just now realizing) a bunch of the Essentials SPs, a couple Future Watch cards and some HoloFX cards.  I have this set completed less 2 cards, already.  But having another one isn't necessarily a bad thing.  I may even have the missing cards in my doubles since I bought a couple of boxes of these last year trying to get those last 2 cards.

Basically, this gives me at least two more Upper Deck flagship sets to add to my set needs list as well as a ton of inserts and GU cards that I may or may not hang on to.  Another cool thing is that apparently Rob is just like me when it comes to storing sets, in that he cuts up the box labels and affixes them to the boxes.  I bet 40% of hockey collectors do the same thing.  We should do a poll.

It is all great stuff and I am glad I now have it in my collection.  Thanks again to Rob over at VOTC!!  I really appreciate the opportunity to take this off your hands and help you toward your next collecting goal.
This Post Brought To You By TheRealDFG at 9:18 AM