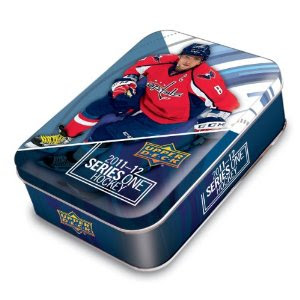 Yes I said Tin.  Every year, Upper Deck releases some type of tin box with their retail product.  This year, Series I features a tin box with 12 packs and a Jumbo Winter Classic card that features last years WC between the Capitals and Penguins, you know, the one that killed Sidney Crosby?  Yeah, that one.  Each pack has 8 cards just like the other retail packs that are out there.  The difference between a normal blaster, though, other than the Jumbo card, is that you get at least 2 UD Canvas cards, generally 3-5 Young Guns, and actually have a chance at pulling a GU card at 1 every 2 tins.  The other difference is price.  These carry a price tag around the $30 mark.  A bit steep for the normal retail fare but it is really only $10 more than normal.

Since you can go all over and see the base cards, I figured I would just show what I was able to pull out of this one.  I picked up one of these when they first hit the market too but I literally (yes, literally) can't find the box.  How a tin full of cards disappears I will never know.  It may have been misplaced into the dreaded Card Garage which if that is the case, it might be gone forever. 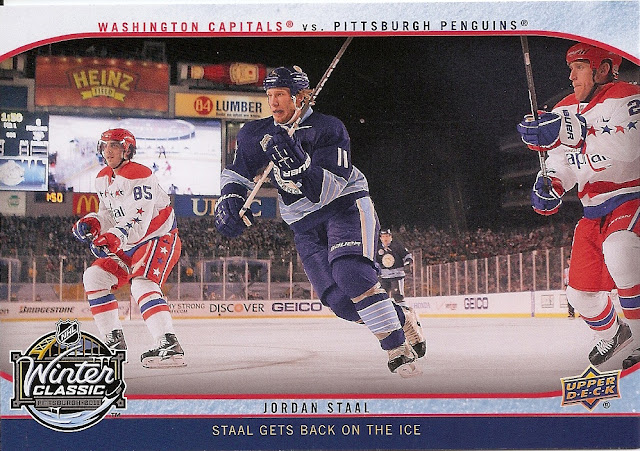 Here is my Jumbo card.  It's Jordan Staal sporting the WC jersey which is cursed and should be permanently retired.  Staal is out right now with a knee injury created by former teammate Mike Rupp in the game the other night against the Rangers. 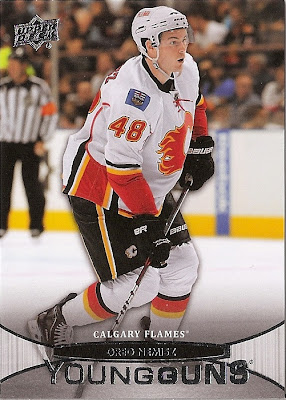 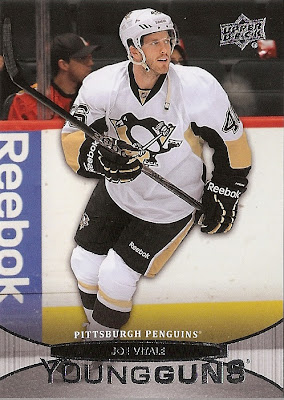 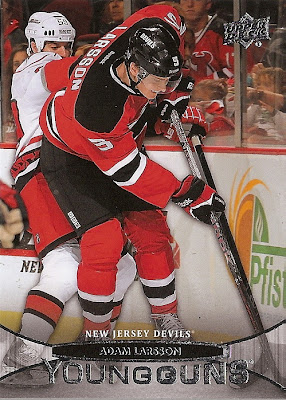 Here were my regular Young Guns cards.  I pulled Adam Larsson, Greg Nimesz, and Joe Vitale of the Pens.  Vitale has been a big surprise and a bright spot in this years crop of rookies for Pittsburgh.  If only there were more bright spots this year.  They dropped their 6th straight tonight against Washington, lost the 8th spot in the East, and were shut out for the first time in a year and a half.  Good job boys.  Let's get healthy, eh? 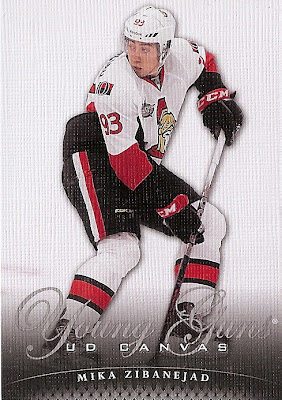 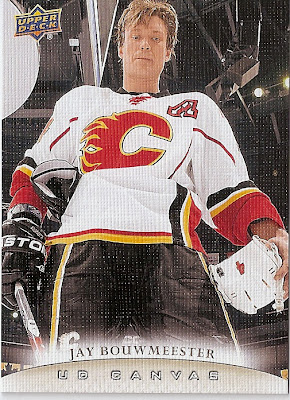 I pulled 2 UD Canvas cards just as expected.  What wasn't expected was the fact that one of them was a Young Gun.  It's none other than Mika Zibanejad.  Gesundheit!!  These are seeded about 1 in 4 tins in the retail so a nice pull even though the subject could be questionable.  I'm kidding of course.  Mika isn't a bad player at all and is a pretty highly touted prospect for his size and physical play as a defensive minded forward.  In fact, if any of you have been watching the World Junior Tournament, he scored the game winning goal for Sweden to win the gold medal.  I wonder if his cards will skyrocket now???  Not likely, I'm sure. 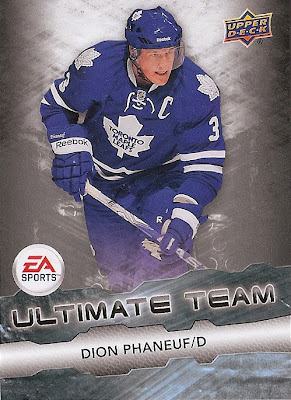 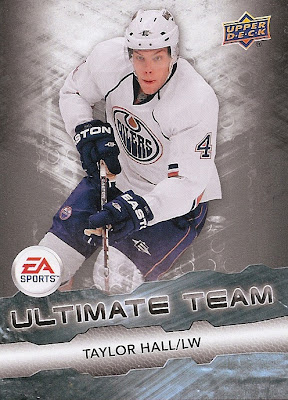 There were two of the ever popular Ultimate Team cards.  Here we have Dion Phaneuf and Taylor Hall.  There are those that say these have no business being counted as cards at all and should just be lumped in with the other "ad" cards you sometimes pull.  I don't care either way.  I don't think they are horrible although I am not a huge fan either. 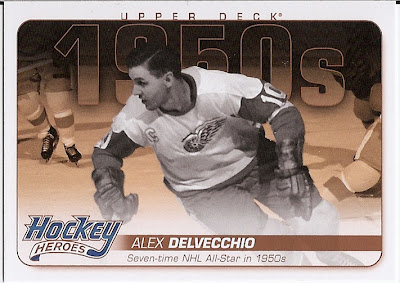 I did pull one Hockey Heroes card.  Here we have 7 time All-Star in the 1950s, Alex Delvecchio.  They changed these up this year with featuring a decade rather than a particular player.  I like them.  I like them a lot. 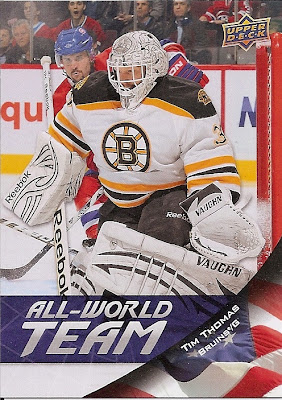 And finally, I pulled a Tim Thomas All World Team card.  I am not a big fan of these either as they tend to permeate the retail versions of Upper Deck hockey.  They aren't bad this year as they show the national colors along the bottom edge rather than a small flag.  I have been pulling Thomas cards a bunch lately.  I have two or three GU that have come from other recent products that I'm sure I will get to in other posts sometime soon.

Again, these are a little more cash than the traditional retail blaster but you do get the extra Canvas card and the Jumbo.  Plus you will get an extra Young Gun or two over what is in a normal blaster.  I only wish the tins were more practical to store cards in.  If you leave the insert in there, you can get a couple small stacks of cards but without the insert, cards fly around all over the place.  If you can imagine, I have way too many empty tins lying around.
This Post Brought To You By TheRealDFG at 9:40 PM