This is my favorite time of year.  Forget the NFL playoffs.  Forget March Madness.  I'll take April/May/June Madness any day of the week.  So, yeah.  I was a little psyched about today.  I figured I would do a bit of a game recap in case anyone didn't get to see this defensive battle. 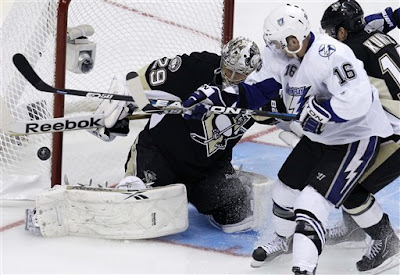 The Penguins, despite losing half their team at one point or another during the season, losing their best scoring threat in Evgeni Malkin, and losing their captain, Sidney Crosby, they were still in the mix.  In fact, they went on a run at the end of the season that put them tied in points for the division lead and essentially half a point out of 2nd place in the conference.  Because of second and third tier scoring, they ended second in the division behind Philadelphia and fourth in the conference.  That gave them home ice advantage, at least for the first round.

And that's where it began tonight.  Consol Energy Center played host in it's first of many playoff games against the always scary Tampa Bay Lightning.  I will admit, I didn't think the Pens matched up well with a healthy Tampa Bay team.  The Bolts are fast, very good on the power play, and have that ridiculous 1-3-1 formation that always seems to confuse Pittsburgh.  In order to win this series, the Pens are going to have to rely on what they did best all season...kill penalties with precision and play defense as if the Cosacks are storming the Kremlin.

Tonight was a good warm up.  Fleury was a beast in goal.  It's not often that I will give the guy the credit he deserves but tonight he stood on his head.  Spectacular save after spectacular save kept the game's lack of scoring an afterthought.  He shut down everything that was thrown at him for his fifth playoff shutout.  Not to be outdone, Dwayne Roloson stopped 37 shots from the Penguins as they unloaded on net every chance they had.  But I'm not here to talk about Lightning players that should or shouldn't have retired 5 years ago.

Fleury stopped Ryan Malone early on in the first period during a mad scramble in front of the net.  About 8 minutes later, Brett Clark blasted a shot from the point that was deflected by Dominic Moore.  Fleury twisted in an inhuman fashion, stopping the puck.  Moore was already celebrating the goal before he realized it didn't go in.  A couple seconds later, Fleury was behind the play, turned around backwards and did a pinwheel roll through the crease to stop Malone again.  It was completely insane.  The CEC crowd when crazy and the "Fleury" chants began.

A few seconds into the second, Stamkos blasted a shot from the point which Fleury stopped again but the rebound came off right to Vinny Lecavalier.  In typical fashion he razzle-dazzled a pass between his legs to himself that Fleury somehow stopped again with his blocker hand.  In all, MAF stopped 32 shots in a brilliant effort.  But that's the kind of play they have been getting from him over the second half of the season.  As much as I hate to give these to a goalie, he is by far and away the team MVP.

As for the offense, Kovalev made good on his trade deadline signing by scoring the first playoff goal.  He got dumped in the corner by Pavel Kubina and was on his knees as the crowd was desperate for a penalty call.  None came but James Neal broke up a play by the Lightning, feeding the stranded Kovalev with a laser pass that was subsequently put into the back of the net.  Less than twenty seconds later, Arron Asham took off down the ice, faked a shot, cut around the back of the goal, and dumped one on a wrap around.  He was stuffed by the post but the rebound came back to him and he put it in behind Roloson who was still trying to get back to the crease after being burned by the wrap around attempt.  The final goal was an empty net tally by Chris Kunitz.

So far, so good.  I was impressed with the Pens defensive play and their surprisingly restrained physical play.  It seems like when they focus on protecting their own zone and forcing play to center ice, they get the opportunities they need to allow some of their role players to get shots on goal.  If they can keep that kind of play consistent, this series may be over quickly.  Once it goes back to Tampa, though, I think the superstars on the Bolts will wake up in front of the home crowd.  Until then, it's good to be a Penguin fan.

Here are some highlights, if they actually work...


This Post Brought To You By dogfacedgremlin at 10:16 PM