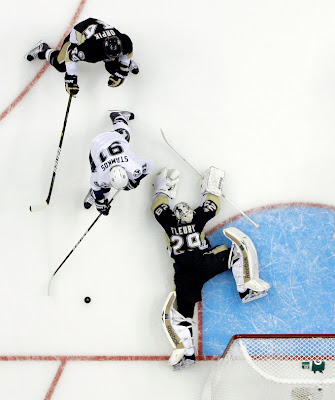 Well apparently the mojo has moseyed on down the road.  Let's just hope it's temporary.

Last night, Game 2 of the playoff matchup between the Pens and Lightning was a far cry from what we witnessed in Game 1.

It's almost better for me when these games are not nationally televised because at least I can wake up the next morning knowing that most of America probably didn't see the performance I unfortunately witnessed by Pittsburgh.  The Lightning came out swinging, putting up a 3 goal first period.  I think I have mentioned it before that the Lightning offense is scary good and they wasted no time getting back into peak form.

Despite missing a few teeth from an accidental stick to the face in Game 1 by Zbynek Michalek, Martin St. Louis led the charge with a goal and an assist but his bigger role was team leader.  Marty has such a passion for the game that it becomes infectious for the rest of his teammates and it's almost like they instantly are fitted with turbo boosters.  Let's just say I knew Game 1 was a fluke and all they needed was time to shake off the playoff rust.

The Pens just looked flat all night.  They were missing routine passes, seeming playing from their own end the entire night, tripping over themselves on defense, and could barely get the puck through the neutral zone.  The only goal came from Craig Adams as the rest of the role players seemed to have lost their way.  The Power Play was non existent once again as they went 0 for 7 and are now 0 for 13 in the series.  But the biggest problem of the night was my playoff x-factor, Marc-Andre Fleury.

When he is on, he is brilliant like in Game 1.  He has some of the quickest reflexes and most flexibility of any goaltender in the NHL.  The problem is that when he faces situations where there are routine type saves to be made, I think he tries to get too cute.  I'm not placing all the blame here on MAF because his defense certainly left him out to dry on a few of those goals but the first goal of the game...come on!  That, to me, was a pretty soft goal.  He should have been able to stop that in his sleep.  After that one went in, I knew things were not going to bode well for the rest of the evening and I was right.

Two days rest and off to Florida.  Here's every goal from Friday night while we wait.

This Post Brought To You By dogfacedgremlin at 8:41 AM