I'm back online with the scanner, people!!  I finally figured out what the major hang up was with Windows 7 and the scanning software.  The drivers were not compatible with my scanner so I had to use trial and error to figure out which model drivers would actually work and still get me the results I wanted.  Mission accomplished. 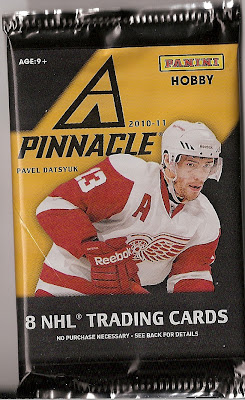 I thought I would celebrate with a box break.  So I'm doing a big picture laden review.  In today's installment, I am taking a look at the newest edition to the Panini brand stable that has been resurrected from the dead.  Pinnacle was always a brand (manufactured by Score at the time) that bordered on the edge of a premium product but never quite made it.  I remember the Pinnacle brand (at least in hockey) would always be just slightly higher priced than their Score counter parts and they would always be a little more edgy and "quirky", for lack of a better word, with their photos.  Panini's newest incarnation of the product is no different. 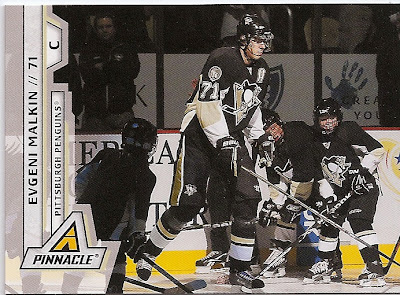 The base cards, at first glance, look quite similar to Panini's earlier Donruss release.  The cards feature mostly a full bleed photo with a semi-transparent white border that houses the brand logo, team name, and player name, number and position.  The difference, as I already mentioned, is that Pinnacle brings a quirky element to many of their photos.  For example, above is picture of Geno Malkin with his teammates...errr...miniature versions of his teammates.  There are also photos like Marc Savard wearing a Santa hat and lugging a big red bag over his shoulder, Lucic and his puck collection, and a great new haircut for Dustin Brown (among others). 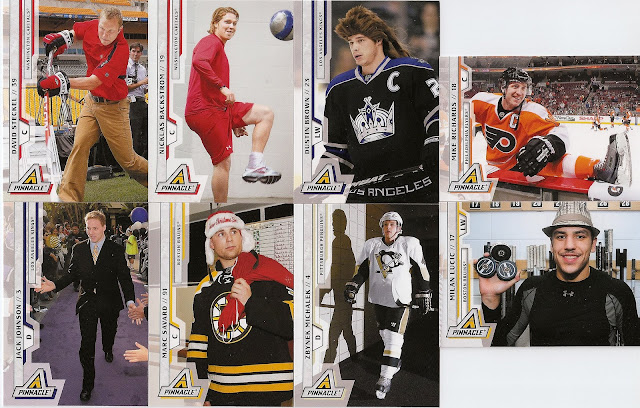 The set also features Ice Breakers which consist of 50 rookies including parallels with autographs, artist proofs, and Rink Collection versions.  There is also an updated version of the Tough Times inserts that are seeded either as regular base cards or as auto.  Fans of the Game are in here as well.  Team Pinnacle is back as a 12 card insert set as well as 6 rookies and the other autos are featured as Pinnacle Pencraft or Chemistry on Canvas insert sets.  City Lights is an interesting insert set that features the memorabilia and can be found in the jersey variety, patch variety, and auto variety.

Here are some of the other highlights of my box. 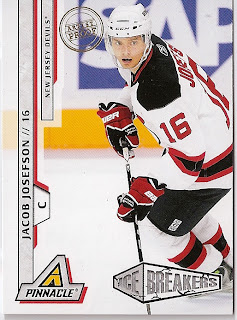 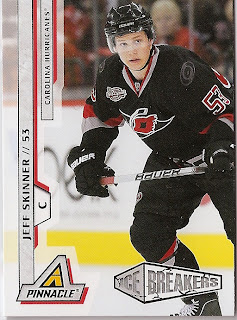 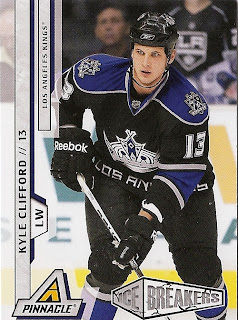 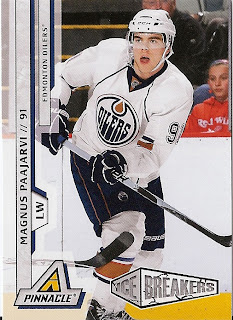 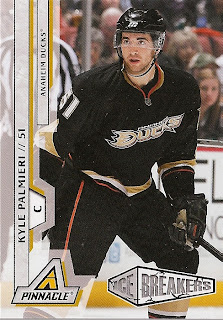 Here are my Ice Breaker rookie cards.  I pulled a Jeff Skinner which I was quite happy about since he is almost a shoe in as the Calder winner.  I also got the Jacob Josefson which is an Artist Proof, as you can see in the top left corner.  I am not sure on the collation of these, nor does Pinnacle...um, Panini mention what it may be.  I will just assume they are somewhat short printed since there was only 1 in the box. 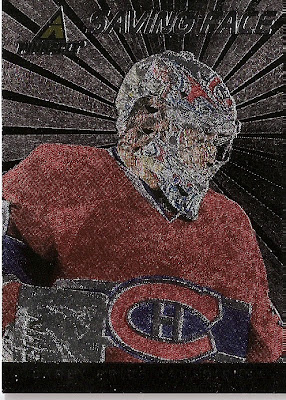 There was also only 1 from the set called "Saving Face".  I pulled this Carey Price.  As you can see, it is laser etched into a solid piece of silver that is about 3/4 inch thick.  The blocker pad is diamond crusted and most of his helmet is laced with pearl.  Don't believe me?  Good, because I was lying.  It is actually that holo foil stuff that Upper Deck uses on Black Diamond.  Still, you can't tell from the scan, but the card looks cool. 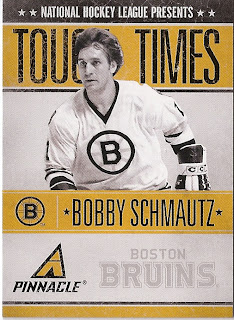 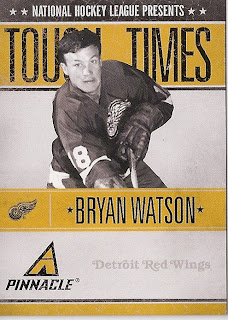 I pulled two Tough Times inserts, neither of which were autographs.  As you can see, the design is basically meant for an auto as the bottom portion of the card is left blank, except for a transparent image of the team logo.  Here I have Bobby Schmautz and former Penguin pictured as a Red Wing, Bugsy Watson. 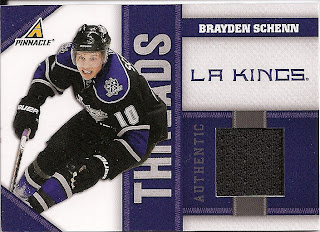 There is apparently a "Threads" set which I was unaware of prior to opening the product.  Here is a Brayden Schenn which was cool at first glance, until I turned it over.  It's numbered out of 499 but the real downer is the fact that a gray stripe adorns the bottom with the dreaded words "Event-Worn Swatch".  At this point in the season for a late release, you can't find a game used jersey?  Really?  REALLY? 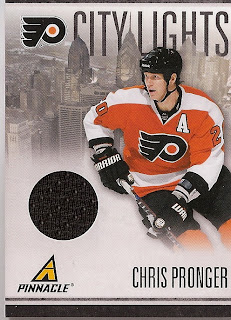 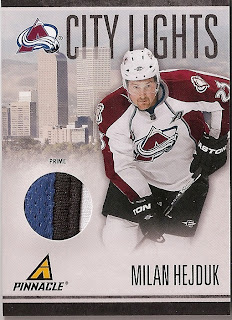 As I mentioned earlier, most of the memorabilia comes from a City Lights set.  The cards feature a cut out of the player, superimposed over a city scape of the team they play for.  Here we have Chris Pronger with a black jersey swatch and a "PRIME" jersey patch of Milan Hejduk.  The Pronger is numbered out of 499 and the Prime patches are out of 25.  The backs of the cards feature a weirdly placed fact about the city featured in the background, not the player. 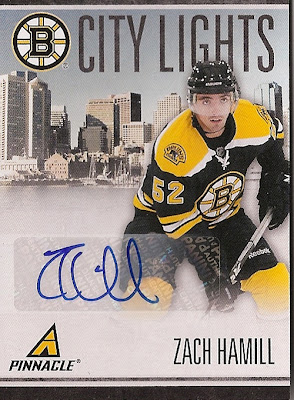 And what box would be complete without an autograph?  Again, the City Lights set is the home for the regular autograph cards and I pulled this Zach Hamill of the Boston Bruins.  Zach is a prospect in the Bruins organization and plays much of his time in Providence.  He has played in only a few NHL games thus far and may end up being a full time minor leaguer unless he gets an opportunity next year.  I am still trying to figure out how we get Zach or Hamill out of that signature.  I guess I see the "Z" and possibly the "ill".  But that's it.  It almost looks like he was trying to draw a picture instead of sign.  Either way, it is still a sticker auto as you can see by the reflective "Panini" watermarked clear label.

So that's it for this break.  Make a decision on your own as to whether you might think it is worth it or not.  I still haven't decided whether or not to pick up another box but I will most likely put the base set together and possibly try to collect the Tough Times set.  I haven't sorted my base cards yet so I'm not sure what I might need.  They will be up on my set needs page soon.

Oh, and I hate the Lightning but will root for them throughout the rest of the playoffs because the Capitals, Flyers and Bruins all anger me senseless.  Tampa's firepower and ridiculously surprising goaltending was simply too much for the injury riddled Penguins.  It was an intense season and I am anxiously awaiting what might be in store for next year.  Fleury for MVP!!  Go Bolts!!

Good night, and have a pleasant tomorrow.

PS...Did I fail to mention that there are no stats on the backs of these cards.  As in, no stats...AT ALL.  Discuss amongst yourselves.
This Post Brought To You By TheRealDFG at 10:27 PM