What's It Going To Take? 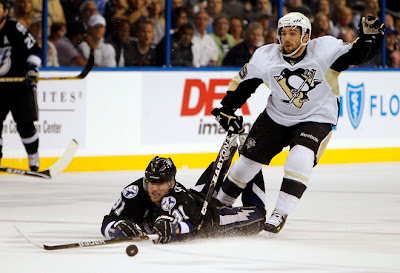 Well the answer to that is a Game 7.  The Penguins couldn't close out the Lightning again tonight.  With a 3-1 lead going into Saturday, they were shellacked into submission by a 6 goal deficit.  It wasn't quite as bad tonight but they walk away from Tampa with their tails between their legs once again.

There really isn't much to talk about on this one.  After pulling out to a 1-0 lead on a very nicely setup play from Max Talbot to Pascal Dupuis, there weren't many highlights.

Probably the best chance the Pens had to make something happen was when Chris Conner was breaking to the net all alone and was tripped, calling for the enigmatic penalty shot.  There have only been 6 penalty shots in playoff history, one of which came last night and another by former Penguin Evgeni Malkin (I only say former because he might as well be at this point) back in 2008.  At any rate, Conner starts out with a ton of speed as he raced straight to the net.  As he nears the goal mouth, he does a spin-o-rama while simultaneously flipping the puck up in the air and then slaps it into the net like hitting a baseball off a tee.  Or at least, that's what was supposed to happen...

Instead, as he drove up about 10 feet from the net he forgot something...the puck!!  As he skated back and to the left to position himself for a shot, it was too late.  Roloson had already gotten himself in between the net and Conner's extremely obvious shot angle.  I must say, it was by far and away the most embarrassing one-on-one shot attempt by a player I have ever seen in my natural born life.  It was worse than when a player falls down.  It was worse than when a player fans on the puck.  Even worse than when a player shoots it so unbelievable wide it almost hits a taxi parked in front of the stadium.  Dan Bylsma consoled his dejected player on the bench but you could tell that he was never...EVER...going to live that down.

Oh and by the way...Teddy Purcell needs to go away, Steve Downie needs to die, Ryan Malone needs to be run over by a semi without the interior tires on the rims, Dominic Moore should go back to whatever rock he lives under, and Nate Thompson, wait a minute...Nate who?  It isn't Stamkos or Lecavalier that are killing the Pens.  It's the role players.  With the exception of St. Louis who has single-handedly taken this team onto it's back, it's all the role playing guys that are making a difference in this series.  I just wish they were wearing the Vegas Gold and Black.

In other news, I still don't have my scanner working.  Windows 7 is great but obviously not for scanners.  It has caused my "TBS" pile to become almost a fire hazard on my desk.  Plus, I have been unable to get things into my system for posting on Ebay or other various sites.  Never fear, though.  I will figure this out.
This Post Brought To You By dogfacedgremlin at 9:26 PM