So what to do on a boring, run of the mill Sunday afternoon?  Mow the lawn?  Plant some shrubbery?  Clean the garage?  I know!!  Bust some cardboard crack.  I decided to bite the bullet and pick up a hobby box of 2010-11 Black Diamond a bit ago.  I don't usually find myself picking up hobby boxes of BD each year because I can usually find blasters at most of the local retailers.  When one of them does their shelf clearing blowouts, you can usually get a blaster box for under $15 (sometimes less).  Since I usually build the set, the blasters tend to be enough to get me on my way.

But on the day I picked this up at the LCS, I was feeling froggy.  With a couple exceptions, I wish I would have gone with my initial instincts and gotten something else.  But I digress. 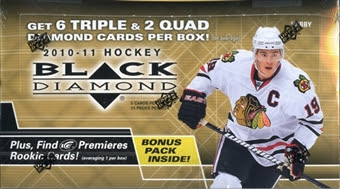 I have already done my best to review this year's BD with a video box break over here.  I will spare you the pleasantries of a design review.  As for a hobby box, as you can see by the box top, there are 6 Triple Diamonds (3 of which should be Rookie Gems), 2 Quad Diamonds (1 of which should be a Rookie Gem) and a bonus pack featuring cards from the Upper Deck Ice set that will contain 1 Ice Premieres Rookie.  There are also 2 memorabilia cards on average and at least 1 parallel card that may or may not be numbered.

I'm not going to scan the base Triple Diamonds because there is really no point to it.  Instead, here are some of the other highlights of the box: 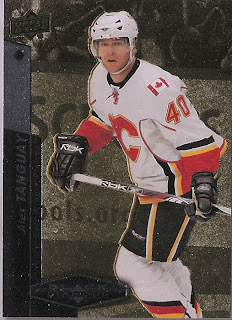 Alex Tanguay Gold Parallel #'d/10 - Not a bad card at all (at least that's what I keep telling myself).  Since this isn't the "all encompassing" set like an Upper Deck flagship or O-Pee-Chee, there aren't many "scrub" players to choose from (unless you are a Flames fan, then you might argue).  With the low print run, I think I did okay for this one.  Plus, the gold foil is definitely cooler to look at than the basic silver. 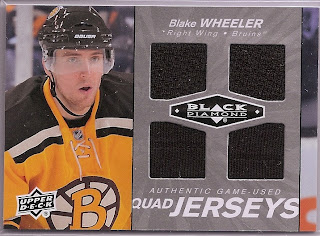 Blake Wheeler Quad Game Used Jersey - Wheeler, seen here sporting a throwback B's jersey, was traded to the Thrashers back in February for a few players including Rich Peverly.  Since the Thrashers season ended early, Blake took a spot on the US National team playing in the World Championships in Slovakia.  He actually scored a goal in Saturday's 5-1 win over Austria.  Just gaze in awe of the four plain black swatches.  If this was an ITG card, that Black Diamond logo laden cross would be gone and this would be one giant swatch...of plain black jersey. 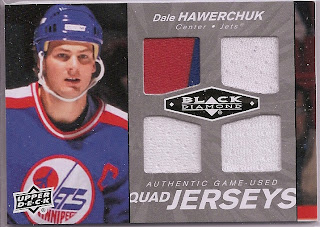 Dale Hawerchuk Quad Game Used Jersey (3-color) - Now we are getting a little better.  I seem to pull some type of "Ducky" memorabilia card out of a product every year.  Last year it was an Artifacts Autofacts card, The year before it was a Remnants Quad from OPC Premier (don't ask why I did it).  At least this one mixes it up with some color. 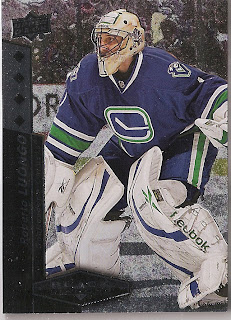 Roberto Luongo Quad Diamond - Nothing to see here, really.  I just wanted to show one of the quad diamond cards.  They look the same as the base but with 4 diamonds on the left side (go figure). 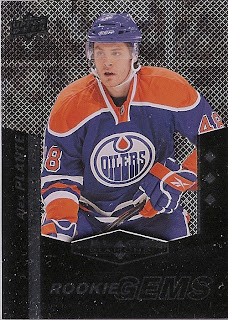 Alex Plante Triple Diamond Rookie Gems - Not what I had in mind when I want to pull a decent rookie prospect but it may bet better.  Plante looks like he might have a decent career in the minor's if he can stay healthy.  That's a big "if" though. 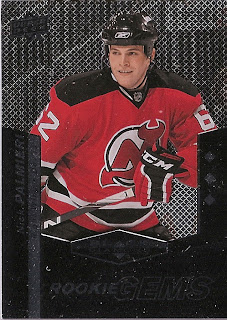 Nick Palmieri Triple Diamond Rookie Gems - Okay, this one isn't horrible.  At least Nick has been given an opportunity, logging about half a season worth of games this year.  He is an able bodied winger and will most likely remain in the "bigs" with the Devils. 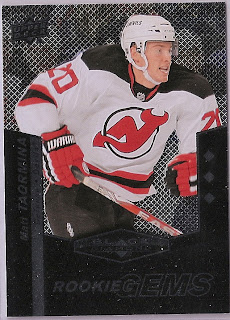 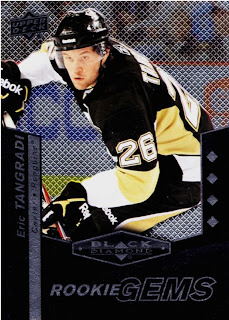 Eric Tangradi Quad Diamond Rookie Gems - Now we are talking!  I tried to change the contrast on this scan a bit to make it look better.  I think it worked...sort of.  Regardless, I think I have made it abundantly clear that my current Penguin prospect "man-crush" is focused on Mr. Tangradi here.  Basically that means that sometime in the near future, he will most certainly be used as trade bait to solidify some ailing position on the top three lines.  It happened this year with Alex Goligoski.  It happened last year with Luca Caputi.  It happened a few years ago with Ryan Stone.  Glen Murray in 1997 to the Kings, anyone?  How about 1996 and Markus Naslund?  Anyone that I begin to feel attached to gets the boot. 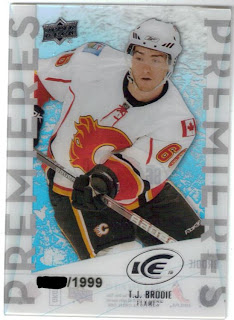 And for the Upper Deck Ice cards...I pulled Patrick Kane, Drew Doughty, Evgeni Malkin (yay!), and Tomas Plekanec for the base cards.  They are consecutively numbered, which pretty much matches the other "bonus pack" I opened from SPx.  The Ice Premieres card was T.J. Brodie #'d/1999.  I blacked out the serial number on the scan because it wasn't my card.  I pulled this from an auction because I can't find the one that I pulled.  It's in a box somewhere I'm sure.

So that's it.  Not that I didn't have enough Black Diamond already but this box was a bit underwhelming to say the least.  The Tangradi was a nice edition to the PC and the Hawerchuk is a decent looking piece.  The Tanguay could have been cool if it wasn't Tanguay.  Definitely not enough here to pay for the box, that's for sure.  Why I continue to punish myself with this set year after year, I'll never know.
This Post Brought To You By TheRealDFG at 10:14 PM

Email ThisBlogThis!Share to TwitterShare to FacebookShare to Pinterest
Labels: 2010-11 black diamond hockey, Box break, the penguins trade all my prospects