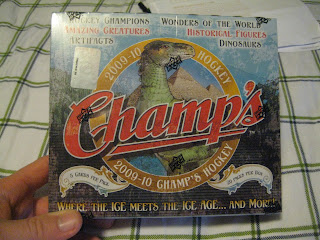 I wasn't big on the Champs sets of Upper Deck over the last few years.  I figured it was just a novelty set that would eventually go away because hockey collectors weren't like baseball collectors.  They wouldn't drool and fawn all over a "retro" themed set in the spirit of Allen & Ginter, would they?  Of course they would. 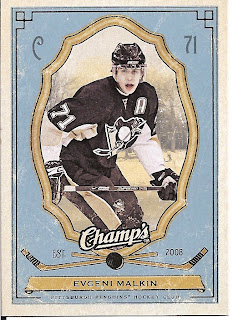 Fast forward to last year.  I picked up a box.  Then another.  Then a blaster.  Then some packs.  Then...you get the point.  At any rate, it took three boxes just to get a complete base set (partially because I traded away about 50 base cards before I realized I was insane) but it made me start to actually like it.  I built the base set, traded off a ton more, started to collect the mini's, and traded off a bunch more of the non-player mini's.  I then tried a second base set for whatever reason only to trade that one off too.  I don't know what it is about the design but I got hooked on it. 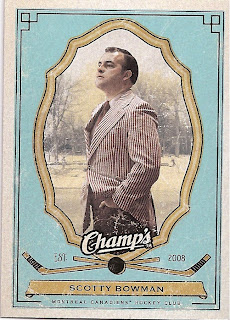 So I have decided to "taste the rainbow" and collect the four color parallels: blue, green, red, and yellow.  Originally, I only wanted to do that for the Pens players but the bug has got to me.  With only 100 cards, you would think it would be easy but it's not.  Blue is done.  Green is only about half.  Red...not even close.  Yellow...don't get me started (or do get me started).  I keep seeing these in bunches on Ebay.  Unfortunately, the ones that keep popping up are the ones I already have. 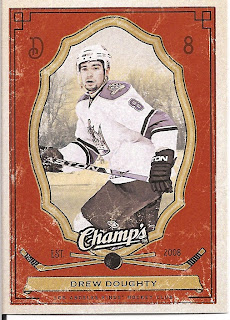 I'm also still trying to polish off the mini's.  I just picked up a bunch of Tobacco sized pages so we will see how that looks in a book.  The Yellow Animal Variation is just against my best judgment so we will leave that one out for now.  Also, the various red, blue, and green back mini's have no place in here either.  That goes for you too, Wonders of the World, World Leaders, and weird prehistoric animals and plants. 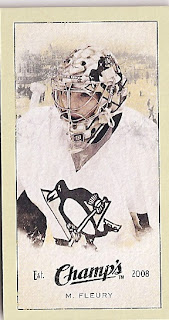 So off I go, collecting another set that I will most likely never finish.  But, in my defense, it will be fun trying to build it.  Right now I have about 30 or so doubles of the mini NHL players and a ton of doubles in the base too.  If you have something you would like to contribute or want to trade something here check my needs on the SET NEEDS page and let me know. 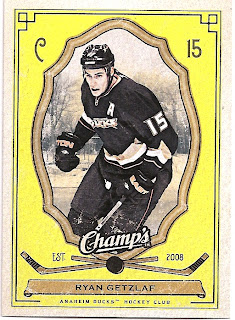 This Post Brought To You By TheRealDFG at 11:08 PM