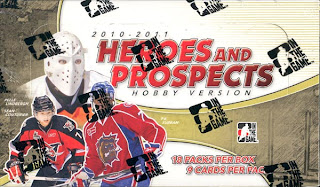 I know I'm a little late to the party on these since they have been out since the end of January, but I have been waiting for my LCS to get them in stock.  A couple weeks ago (I know, it takes me a while, ok?) I picked up my first box of 2010-11 ITG Heroes & Prospects, the first ITG break of the year for me.


For those that don't know (and how could you not), In The Game has been putting out quality hockey releases for years (since 2004-05 for this series) but has yet to secure a license from the NHL.  The reason...?  Politics mostly but I won't get into that here.

If you want to see how a fantastic, non-licensed product is done, look no further than ITG.  Every year without fail, ITG gets all the top players from the CHL and AHL stuffed into this product with loats of autographs, Game Used, and combo auto/GU cards.  They are also able to throw in many stars of the NHL featuring their playing days on the various farm teams, olympic teams, world juniors, etc.  This year is no exception.  With that said, let's take a look.

Each box should have - 2 autographs, 2 game-used relics, 3 inserts


The base set consists of 150 cards with inserts sets including the Memorial Cup Champions (15), Calder Cup Champions (15), AHL 75th Anniversary (35), and the 100 Years of Card Collecting inserts that feature an vintage tobacco-esque image of a player.

I didn't pull a card of the envious nature like over at Cards On Ice, but I did get a few nice pieces.  In my box, I pulled 138/150 base cards with no dupes.  ITG does a good job on collation and you can rest assured that you will usually get about 90% or better of the base cards in a box.  I pulled (1) 100 YOC card, (3) Autos, (1) Calder Cup Champion, (1) Top Prospect Jumbo Jersey Black, (1) Subway Super Series Jersey Black, and (1) Class of 2011 Draft Redemption card.  I didn't scan the Calder Cup card but here are the rest in all their glory.  If you want to check out the base design or some other examples, check out the sell sheet posted by Blowout. 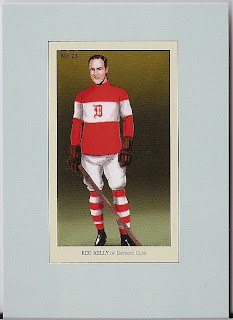 100 Years of Card Collecting Red Kelly
Well it wasn't the Lemieux that I wanted to pull but regardless, these cards are great.  When I first saw the previews, I assumed they would be mini's but ITG decided to feature them as a full size card.  I don't think that detracts from them in the least, however.  The design is reminicent of the C56 Tobacco cards that were issued back in 1910 by Imperial Tobacco.  This is widely regarded as the first hockey set to enter the "mainstream" market, as tobacco companies previously focused their card production on advertising.  The back of the card has the crossed sticks at the top with a brief listing of the clubs the player has been on.  Here we have Red Kelly, who played with Detroit and Toronto between 1947 and 1967. 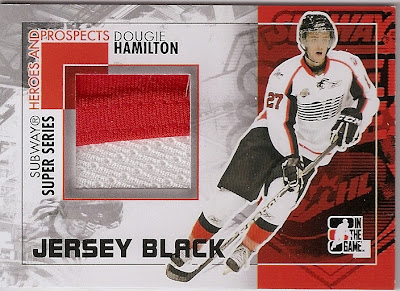 Subway Series Jumbo Jersey Black Dougie Hamilton
These are un-numbered but supposedly come from a print run of 100 copies.  This comes from Dougie's 2010 SUBWAY Super Series jersey he wore in the game.  You can see the swatch contains two colors and features a seam.  Seeing this in person is 100% better because that fabric is almost coming out of the card. 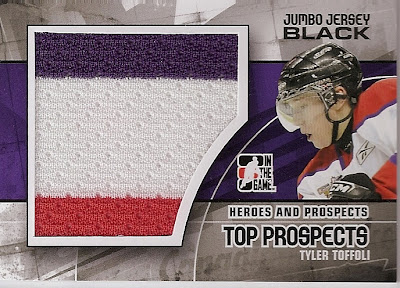 Top Prospects Game Jerseys Black Tyler Toffoli
Again, these are un-numbered but supposedly come from a print run of 100 copies. ITG doesn't skimp on the fabric they put into their GU cards.  If you enjoy small cut outs the size of a nickel or dime, forget it.  No sissy swatches here.  Tyler came out of the second round of last years draft to the LA Kings.  Here we have a nice three color, red, white, and blue jumbo swatch from the 2010 Home Hardware CHL/HNL Top Prospects game. 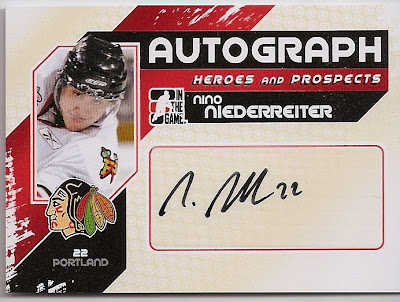 Autograph Nino Niederreiter
El Nino is currently biding his time with the Portland Winterhawks, only playing 9 games thus far for the Islanders.  In fact, he scored a hat trick the other night in Portland's 9-1 (sorry, no Ovech-trick) win against the Seattle Thunderbirds.  He was the 5th pick in last years draft and has a huge upside, especially for the future of the Islander's franchise.  He has 35 goals and 25 assists for the conference leading Winterhawks.  He has the potential to be a beast in the NHL. 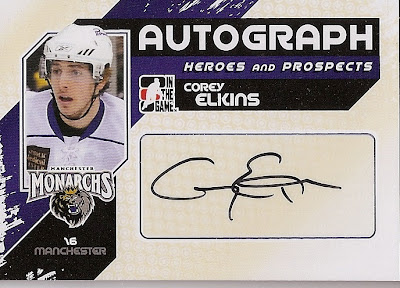 Autograph Corey Elkins
Corey was a highly touted prospect coming out of Ohio State and rumor has it, he had 24 teams with a target on him.  The Kings picked him up and signed him to an entry level contract in 2009.  He has the toughness and offensive potential to add depth to third or fourth lines.  He is currently on the Manchester Monarchs. 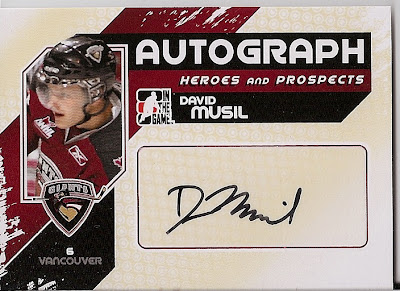 Autograph David Musil
This guy is 6' 3", 190 lbs.  He's also not even 18 yet, I think.  He's not a fast guy for a defenseman but what he lacks in speed, he makes up for in size and agility.  When he was 15, he was playing in the Czech Elite League for Dukla Jihlava. He was was the youngest player along with Kevin Lowe's son Keegan, and Craig Simpson's son Dillon. 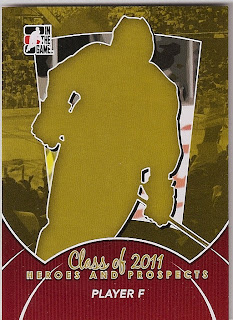 Class of 2011 Draft Card Player F in 20th position
The concept is interesting but companies have tried the "Predictor" thing before and it failed miserably.  But for a prospects set, it might work.  The deal is if the player represented by the letter on the front is drafted during the first round in 2011, it can be redeemed for a Game Used card /10...if the number foil stamped in silver on the back matches their actual draft position.  Two things that I like, prospecting and gambling.  Here I have Player F and the draft position is 20th.  The names of the players were announced two weeks after the 2011 Home Hardware CHL/NHL Top Prospects Game.  My player is Nathan Beaulieu.  In everything I have read on this guy, he seems like he is going to fall anywhere from 18-22.  I like the odds on this one.

Overall, I don't think there is a thing that ITG puts out that I don't like.  The card designs are great, unobtrusive, well laid out, and conceptually appealing.  The GU cards never fail to impress and the 3 autos in the box were a nice surprise, especially the Niederreiter.  It would have been nice to pull a base set but I'm not complaining here.  It just gives me another reason for a second box or at the least, another set to trade for.
This Post Brought To You By TheRealDFG at 5:08 PM