Today's game was most definitely not a goaltenders paradise.  With only scoring 5 goals in the last four games, they took a step in the right direction to fixing the hole in the bucket today with a 6-5 shoot-out win over Toronto.  Toronto picked up a point on the Canes with the overtime extra (they have a game in hand too) and helped their cause a bit at making a playoff spot.  I said at the beginning of the season that I thought they would be in this year.  The Kaberle trade had me a bit worried by I still stick with my original statement for now.

The Pens get the two points they needed to stay put in the East but the bigger stories here are the impact of Kovalev in the game and the return of Mark Letestu.  Kovalev scored a goal and potted the game winner in the shoot-out.  He logged another 17+ minutes of ice time and picked up another 4 minutes in the box.  Mark Letestu came up big once again vs. Toronto, with a goal and an assist in his first game back from injury.  Letestu seems to bring his "A" game every time he faces the Leafs.  I think the best goal of the game was Maxie's sweet shortie that came off a foot race to a loose puck in the neutral zone.  I know it's only one game but the Pens need momentum from winning performances like this.

But enough about that.  I wanted to show off a few from the Bay that I picked up on the cheap...VERY CHEAP!  I have been pondering what direction to take some of my PC in.  One thing I realized is that I have very few autographed items.  Without counting my Penguin stuff, I think I have maybe a couple dozen autos.  That might seem like a lot to some but it is one area that I have never been really focused on expanding.  While perusing some soon to close auctions, I stumbled across a little gem that featured four autos with a bid price under $3.  Better yet, they are hard signed on-card.  Better still, they are Champs mini's from last year. 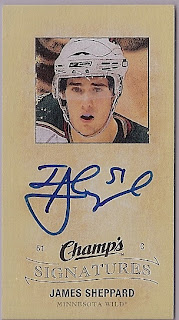 2009-10 Champ's Signatures James Sheppard - I like when a player puts his uniform number on his signature.  Especially when they have a signature like this.  Looks like it says IAe(something)e.  It still looks cool though.  Sheppard has been sidelined all season with a broken kneecap.  Just recently, he was cleared to begin practicing and has been participating in a few morning skates.  Even if he was ready to play, he is still suspended due to his ATV accident prior to training camp.  Reminds me of another idiot on a motorcycle. 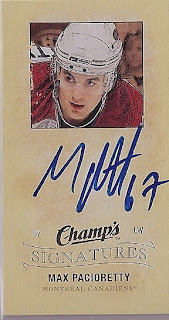 2009-10 Champs Signatures Max Pacioretty - Max was a first round pick by the Canadiens in 2007.  So far this year, he has 20 points in 32 games, including a goal the other night against Toronto.  Once again, another signature that benefits from the uniform number being present.  That looks like MuAt. 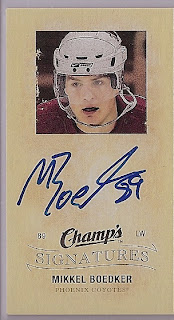 2009-10 Champ's Signatures Mikkel Boedker - This signature is interesting because it has the elements of a good signature but then falls apart at the end.  You can make out the M, the Boe, and then there is some scribble the resembles a "J" with a swoosh.  Again, good thing for the uniform number.  Boedker has four assists in the Coyotes last three games.  He was called up to replace Ray Whitney and if he keeps this pace up, could have a spot in the lineup even after Ray comes back. 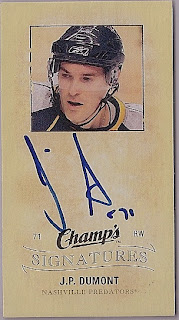 2009-10 Champ's Signatures J.P. Dumont - My favorite one of the bunch, it's J.P. Dumont.  All we have here is a "J" and "P" with his uniform number.  Even without any semblance of a normal signature, as long as you are a hockey fan, you would know who this is.  That's what makes it cool.  I wouldn't be surprised to find J.P. on a new team real soon as his playing time has dwindled over the last couple years in favor of other Preds forwards.  With the pickup of Mike Fisher from Ottawa and the return of Marek Svatos from injury, I think his days are numbered.
This Post Brought To You By dogfacedgremlin at 10:14 PM