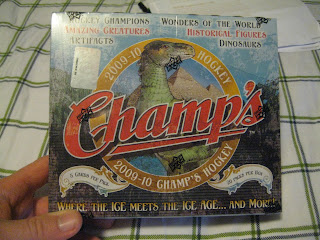 Puck Junk beat me to it but I am going to post my Champs box that I got from the Sun-Times show a few weekends ago anyway.

I didn't buy any Champs last year because I thought it was a little too gimmicky for my taste.  I did pick up a few Pens I mean, who wants cards with dinosaurs on them?  Well apparently a lot of people.  For those non-hockey collector's out there, I can only compare champs to the likes of A&G in baseball.  It has the old-time feel of the early 20th century cards and features a slew of mini tobacco-esque style cards.  The draw to these has been the variants on parallels such as different color combination's and back printing, as well as the chase sets including the prehistoric creatures.  I just always thought the chance at pulling a real live fossil out of a pack was a little over the top (I really meant fossil, not another Gordie Howe tribute card)

Well this year was different.  Something about the previews Upper Deck released over a month ago caught my eye and I still haven't figured out what it was.  I decided that if I couldn't find the 1 box I have been looking for (ITG: 1972 The Year In Hockey) that this was going to be the one.  For $65 from the guys at Dave & Adam's Cardworld, I was on board. 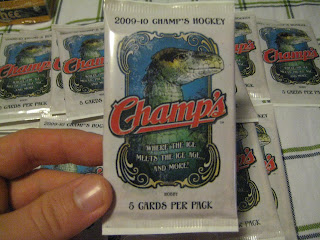 
You can also pull case hits here that include 1 "Museum Piece" card that features those fossils and bones I already discussed, 2 Hall of Legends GU cards, 1-2 Mini Rookie Parallels, 4 Regular size Animal Icons, and 7 "Color Variant" Mini parallels.  Like I said, lots of stuff to chase. 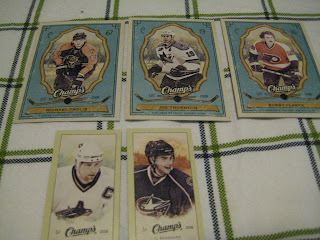 I tried to scan this stuff but there is something screwy with the scanner.  So here is a quick pic.  You can see the design of the base cards is blue with the washed vintage feel to it.  The players photo is bordered by the wicked step-mother "mirror-mirror" and there is a crossed-stick masthead, only at the bottom of the card.  I will say, I am not impressed however I do kind of like these.  They are probably my favorite vintage/throwback/retro set since Topps Heritage earlier in the decade.  Bobby Clarke in the first pack.  I guess this is another set with a bunch of retired superstars and HOFers.

The mini's look very similar to last years and there are a bunch of different variations.  Here are the two that came from the first pack.  The nice mountainous landscape and terrain behind Brassard really does remind me of...Columbus, Ohio.


I will post more of this one later.
This Post Brought To You By dogfacedgremlin at 10:43 PM