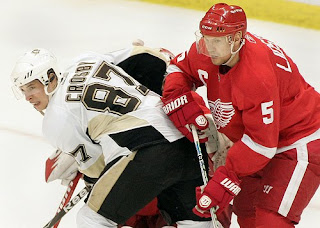 Lidstrom trys to give Sid a little "how's your father"
Not much to say about the Pens lose to Detroit at the Joe last night.  For the majority of the game, the Pens seemed to be playing sloppy, uninspired hockey.  For a minute there I thought I was watching the Bruins.  But I digress.  There was no shortage of the "Crosby Sucks" last night either.  Each and every time he touched the puck or even came near it, off they want.  I thought they had moved the game to Philadelphia and traded the Joe for food stamps there for a minute.  Flower played great, despite letting two softies float by.  If they are going to move me in this playoff run, he is going to have to be stellar.

Bottom line...did we lose to our Western Conference rival Detroit?  Yes.  Was it detrimental to our winning the Atlantic Division?  Maybe.  Was it the nail in the coffin for a playoff berth?  No way, Jose.  That's not to say the game wasn't important.  This wasn't like a preseason tryout game or an early season positional game.  This was a playoff like atmosphere.  The two points for a win would have definitely helped push for the #2 spot in the East.  Jersey now has two games up on the Pens and is only 2 points back.  At this point, we are really playing for home ice advantage through the Conference finals.

For Detroit, this was a playoff game.  The Wings were two points ahead of Calgary, who has a game up on Detroit, for the 8th and final spot in the West.  They are in Full Metal Playoff mode, ie. bumping and grinding and sticking to you like fly paper in their "non-penalty" inducing interference kind of way.  I'm not saying there were bad calls, more like bad non-calls.  I haven't seen that much obstruction since I saw a fat guy get stuck in a subway turn style.  I'm not complaining though (CHEATERS!!!).  That is playoff style hockey.  They had the intensity and we didn't.  Fair enough.  Now STOP IT! 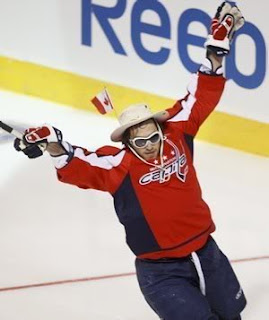 The Great Ape in all his fashionable glory
We get the Caps on Wednesday and I have a feeling this is going to be a statement game for Washington.  They are the team of destiny if you read Washington media.  They are built to win and to win now.  This would be icing on the Presidential Trophy season cake if they can go in at the end and wipe the ice with the Champs.  We are probably going to be without Malkin again so it is going to be no easy task.  Either way, I think we are in for a great game.
This Post Brought To You By dogfacedgremlin at 10:41 AM

Email ThisBlogThis!Share to TwitterShare to FacebookShare to Pinterest
Labels: i hate the capitals, i hate the red wings, pittsburgh penguins, playoff hockey