Ok so I figured the scanner stupidity out and was able to get some better shots of some of the cards.  Since I already went over the break down in the previous post, I am going to show some of what came out of the box.

First up are the base.  All of the base cards have a blue border.  As I already stated, they have the retro feel, kind of contrived, but still cool.

(Scotty Bowman-Turquoise, Drew Doughty-Red, Ryan Getzlaf-Yellow)
Each pack contained 2 mini cards.  There are also color back variations of these.  Some that were in my box included:

(Marc-Andre Fleury, Bobby Hull, Brian Gionta - Blue Back Parallel)
Some of the "chase cards" that were included were: 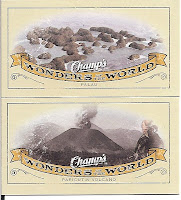 (William McKinley - Historical Figures; Natural History Cards - Daspletosaurus, Aublysodon, Common Raven; Wonders Of the World - Palau, Paricutin Volcano)
Here are my 4 "HITS" that I received.  Unlike some of the other breaks I have seen, I actually got three GU and one auto instead of two and two. Unfortunately, they are not the best, although the Robinson is kind of cool.

Overall, my break came out close to what the sell sheet suggested.  I would have preferred 2 autos instead of the extra GU but that is ok.  The chase cards came out as expected with 3 HF cards, 2 WotW cards, and 5 NH cards.  Again, the mini's came 2 per pack and I did get the 1 parallel color back.  The other base color variants came out with 1 yellow, 3 reds, and 4 turquoise. Oh, and I also got this,

along with 5 other mini rookies (1 more than expected).  It is my first Hedman from any product this year.  I like it.  Still not sure if I am going to put this together.  It would be fun but I have a feeling it will be expensive.
This Post Brought To You By TheRealDFG at 8:00 AM