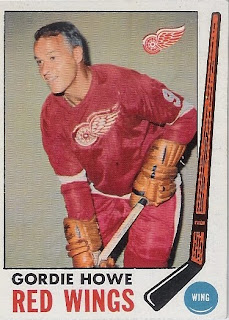 I would hardly consider myself a Howe collector by any means.  In fact, pulling Gordie cards out of product over the last few years has been rather amusing considering Upper Deck has forgotten his name completely and has gone with Mr. Hockey.  So on this day, I thought I would take this opportunity to show off my meek Gordo collection. 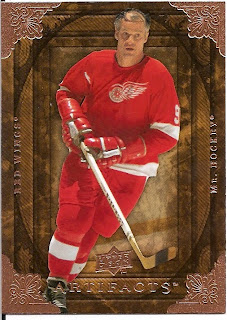 On this day in 1928, Gordon "Gordie" Howe was born in a farmhouse in Floral, Saskatchewan.  Anyone that doesn't know of Gordie's achievements on the ice has either lived under a rock their entire lives or never once watched a hockey game (or even heard of hockey for that matter).  Howe is a pioneer in the sport and has been compared to the likes of Mickey Mantle and Babe Ruth in their achievements in baseball (although that might be insulting to Howe). 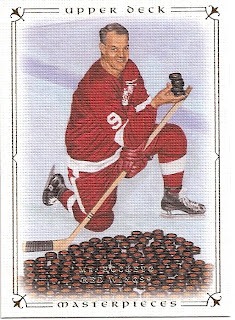 Mr. Hockey, as he became known later in life, is the only player in NHL history to have a playing career that has touched on five decades.  FIVE!!  He was 52 when he retired from the game he loved.  Gordie helped the Detroit Red Wings win four Stanley Cups in 1950, 1952, 1954, and 1955.  He won both the Hart and Art Ross trophies 6 times each and played in 23 All-Star games.  You can wiki/google/whatever you want to know about him so I won't bore you with statistics.

Here are some of the most notable things that I remember and that you may or may not know about Mr. Howe...: 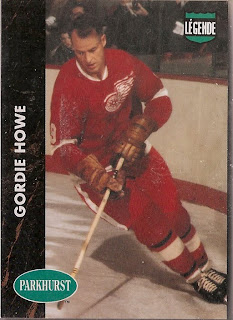 ---He has the honor of having his name attached to a rare feat, especially in today's game.  A Gordie Howe Hat Trick is when you score a goal, an assist, and a fight in the same game.  Awesome! 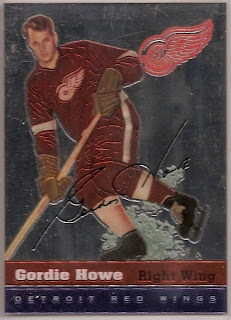 (I wish there was a better way to scan "shiny")
---I am not sure as to the validity of this but I was always told that he chose to wear #9 because that meant he got a better choice in the sleeping car on the train ride to away games.  I guess lower numbers chose first.  He started his career wearing #17. 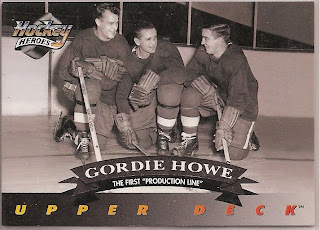 ---Most people know this but Howe was the anchor on the "Production Line" named for their scoring capabilities and as homage to the car industry in Detroit.  Along with Sid Abel and Ted Lindsay, the "Line" finished first, second, and third in scoring in the 49-50 season. 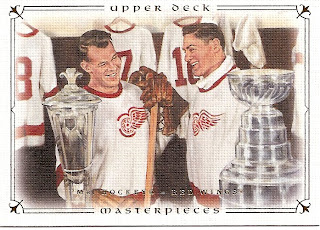 ---With all the talk and controversy about head shots, I say suck it up!!  Gordie fractured his skull during the playoffs in 1950 after smashing into Ted Kennedy of the Leafs.  He had to have emergency surgery to relieve the pressure on his brain so that he didn't die or end up in a comma.  He returned the next season and won the scoring title with 86 points, 20 more than anyone else. 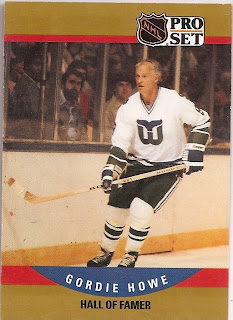 ---His scoring ability was deadly.  Howe was ambidextrous and shot the puck both right handed and left handed.  Keep in mind this was back before the sticks were curved.  So really, he had no backhand. 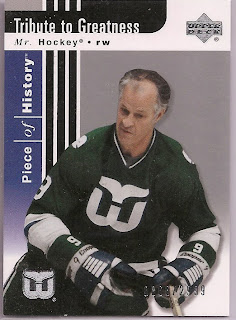 ---In the 1979-80 season, Gordie played alongside his sons Marty and Mark for the Hartford Whalers.  This was the first and only time that has ever happened in the NHL.  He also played with a very young Wayne Gretzky on the WHA All Star team against Moscow's Dynamo team. 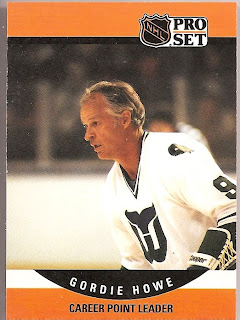 ---Speaking of the "Great One", I heard also that Wayne chose to wear #99 because he had always idolized Gordie Howe growing up and could not bring himself to take #9 in his honor.  Maybe he thought he was twice as good?...

Happy Birthday to one of the architects of this great game that I love and one of the greatest to ever lace up the skates!! 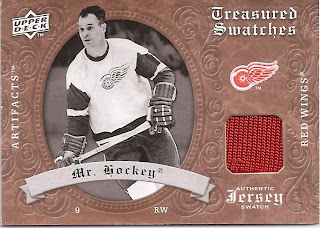 This Post Brought To You By dogfacedgremlin at 6:00 AM