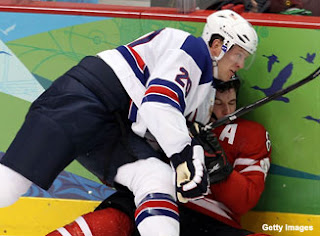 If you aren't a hockey fan, I'm sorry.  I truly am sorry.  You are missing out.  Even if you aren't, today's games could easily convert the non believers.

The Team USA vs. Team Canada matchup has had the epic battle label attached to it since the Olympic games were announced to be held in Vancouver.  There was so much hype leading up to this game that I was so skeptical that it would fail on an epic scale.  Thank God I was wrong.  I think the majority of the game, I spent standing on my feet in nervous anticipation.

This game had it all.  Great scoring chances, awesome goaltending, hard hits, and plenty of emotion that you usually only see in NHL playoff hockey.  For these guys, it was a playoff game.  A playoff on a global scale.  This, afterall, is Canada's game.  Not only is there a certain pride involved with winning this thing, but the winner will get a bye through the first round of the semi finals.  The losing team may actually have to play an additional game in the preliminary round.  The USA had everything to win and Canada had it all to lose.

The crowd was into the game from the opening face off.  Chants of CANADA and USA went back and forth throughout the game.

All game long, it was back and forth with each team trying to top the other.  My favorite play of the game had to be with less than 4 minutes left when Canada was on a power play.  Miller made three beautiful saves in a row as he was sprawling across the goal crease.  Crosby was able to redirect a Rick Nash pass less than a minute later to bring Canada within 1 goal.  Sometimes a little bit of luck makes all the difference.

It didn't matter though.  Ryan Kessler was able to race down the ice and make a diving swat at the bouncing puck into an Brodeur-less net.  The USA came out with the win, giving them either 1st or 2nd place in the division. Canada will have to play Germany on Tuesday and their elephant just keeps getting bigger.

I don't know what else to write.  That game was phenomenal!!  This was the best birthday present I could have ever asked for.  I need a nap.  USA!!  USA!!  USA!!!
This Post Brought To You By dogfacedgremlin at 8:59 PM