2 Blaster boxes from Wally World that somehow jumped into my hands without me knowing.  I was in the automotive section at the time so it seemed strange to me too.

In all seriousness though, Series II is out!!  Alex Ovechkin graces the box cover as well as the packs.  He is the Yang to Series I cover-boy Sidney Crosby's Yin.  Time to finish off the set.  If anyone has doubles or triples or just plain doesn't want what they have...I'm listening. 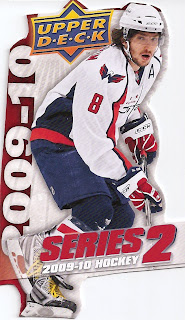 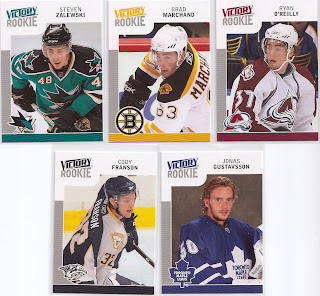 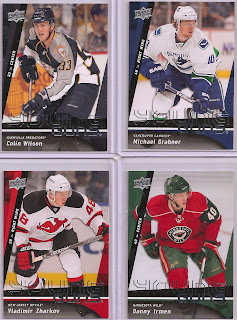 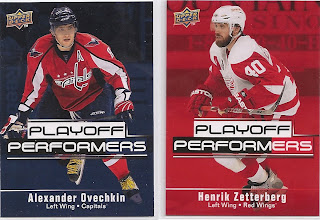 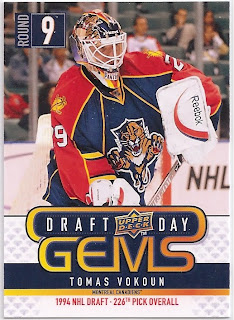 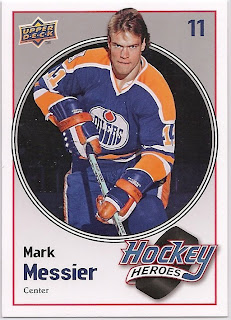 Being one of my yearly sets I try to build, I went into this thinking I could knock out a chunk of the set with the potential for 120 total cards out of the 200 in the base.  I forgot about the fact that the Victory Update cards are randomly inserted into Series II packs.  That cut down on my base chances by 12.  Plus, with the 4 inserts and 4 Young Guns, I was only able to pull 100 base cards.  12 of those were then doubles so instead of half, I only ended up with 88 cards out of 200.

I really like the Messier Heroes set, much better than the Brodeur set from Series I.  Even though the design is the same, I guess the mystique of Mark Messier and the fact that he is now retired makes him more of a legitimate "Hero".  The Playoff Performers are not bad, clean looking, lots of color, but remind me more of something that should be in Collector's Choice or MVP, not the flagship set.  I still like the Draft Day Gems series.  I think the concept is good and the player selection isn't bad for the set.  The base cards are the same design as Series I.

My want list for this set is now posted.
This Post Brought To You By TheRealDFG at 12:00 PM