The latest package is brought to you by none other than Tim at the Great Sports Name Hall Of Fame. If you haven't seen this blog, what are you waiting for. Plus he collect Fred McGriff cards so he can't be all that bad. Anyway, I have been doing quite a bit of potential trade hunting lately and this one is one of those "I have no identity" trades that brought me a very eclectic mix of cards for my half-assed new collecting ventures.

As most of you may already know, I have sort of taken back up the baseball collecting. So in order to keep things consistent with my collecting of Pittsburgh stuff, Pirates have been the team of choice. I have also been contemplating putting together some collections of linebackers in football. I am not real sure where that is going to go yet because it is still in it's infancy. Of course, I am always looking for Steelers and Penguins. So in lieu of all these things, I present to you part 1 of the most interesting mix of cards I have ever gotten in a trade (that is it's official name) complete with comments. 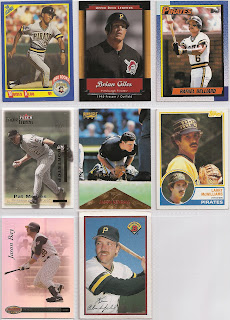 -We start with Moises Alou in all his anorexic glory. I'm sure he wasn't but compared to guys of today, he is a stick figure.
-Brian Giles was a legend, according to Upper Deck. I'm not sure about that but I did always like Brian. Another example of squandered talent by the Pirates organization.
-Orlando Merced...I'll get to him later.
-3 guys I don't remember playing for the Bucs in Meares, McWilliams, and Oberkfell. Of course Ken's card is one of the '89 Bowman oversize monstrosities which I always hated because they do what this one did at the top because it doesn't fit in a page or sleeve correctly.
-I like the 2 Jason's here. Kendall is on the ground looking for a missing contact lense while Bay is watching his long ball travel out of the stadium. 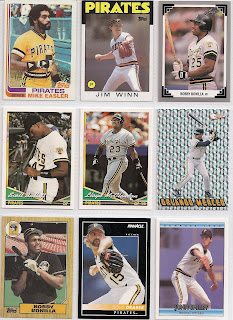 -Here we have Mike Easler holding a mic. Probably getting ready to rap the National Anthem Pittsburgh style.
-Jim Winn...what a name for a pitcher...Winn.
-There are 2 Bobby Bo's on this page. BB was one of my favorite Pirates of all time (besides Bonds) and I was crushed when he went to the Mets. I've had a deep seeded hatred for the Mets ever since. At least they are still paying for him in their team salary.
-Scott Bullit and Lloyd McClendon from the same Topps set 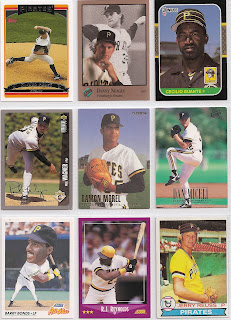 -Next up is Oliver Perez. It's a more recent card, and therefore, I have no idea who that is.
-Ah, Denny Neagle in his Glamour Shots Senior Yearbook picture. How cute.
-Cecilio Guante...I don't know whether I like the scowl on his face more or the old school Pirate logo.
-I remember Paul Wagner a little but those other two guys in the middle row...?
-Here is a big head Barry card. I was always a fan of Barry despite his controversies. I was also always a fan of these cards. I always thought someone should have made an animated series out of these caricature sketches.
-Good ol' RJ and his drawn back batting stance. He was at a Little League clinic I went to as a kid. Obviously his teachings didn't rub off because here I am blogging instead of gearing up for spring training.
-One of my favorite cards of the batch...Jerry Reuss. I always remember pulling cards of him as a kid and wondering why somebody's grandfather was still playing baseball.

This post is getting long so it's being broken into two. Stay tuned for the rest.
This Post Brought To You By dogfacedgremlin at 6:00 AM