Well Thought Out Yet Completely Random Penguin Cards of the Week: Game 7 Edition

With the unofficial self-proclaimed theme of the Pens being "Out For Justice", it is fitting that it all comes down to one game.
WIN OR GO HOME!!!!
With that being said, I wanted to present not one random Pens card but a multitude in the hopes that it may bring some luck.  These are the guys that need to play on some kind of Zen level tonight if the Pens are going to make it out alive.  I am not superstitious or anything but I did notice myself sidestepping all the sidewalk cracks on the way to work this morning.  I'm just saying... 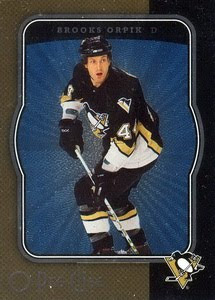 2007-08 OPC Micromotion Brooks Orpik
Orpik was quoted as saying, "When you play a best of 7, usually the best team wins.  So, I think we're pretty confident going into it."  Let's just hope not TOOO confident.  Brooksy can be a game breaker and he is going to have to bring it.  Out For Justice!! 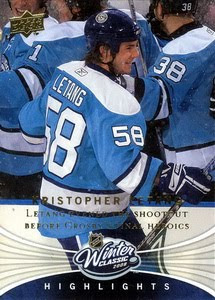 2008-09 Upper Deck Winter Classic Kris Letang.
Tanger must play the game of his life tonight.  No more random shots AT the goal.  We need shots ON the goal.  Experimental gameplay time is over.  Out for Justice, indeed. 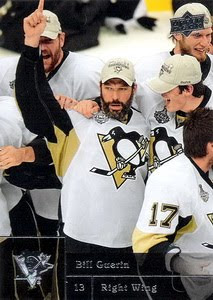 2009-10 Upper Deck Bill Guerin.
When asked about game 7, Guerin said, "It's obviously not what we were looking for."  Yeah?  Well, you got it.  Now do what you do best and make it happen.  Your leadership is unparalleled in that locker room and whatever is left in that tank needs to be emptied tonight.  Out For Justice!!
And last, but certainly not least are the three key elements to tonights game.  If either of these three gentleman is having an off night, tee times will be early tomorrow for sure.  The time to show what we are made of is now.  There can't be another game 6 performance.  Out For Justice!!! 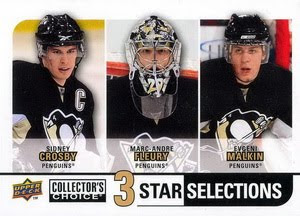 2009-10 Collector's Choice 3 Star Selections Crosby/Fleury/Malkin
This Post Brought To You By dogfacedgremlin at 10:30 AM