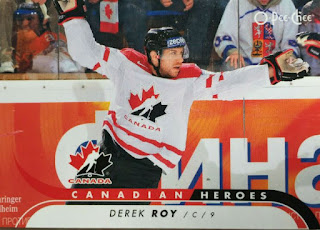 On May 8, 2009, Derek Roy, then Buffalo Sabres center, scored two goals for Team Canada on their way to a 3-1 victory over Sweden at the 2009 World Championships.

Many thought that despite the level of talent on the roster at the time, the team as a whole was underperforming and it showed. Many previous games were lackluster at best and it took a private, team-only meeting to light the fire under the players to give one of their best performances of the tournament.  By beating Sweden, the Canadians set up their destined rematch for the Gold Medal with Team Russia.

Although Team Canada once again, fell to the Russians in the Gold Medal Game, Roy finished the tournament with four goals and four assists in nine games.