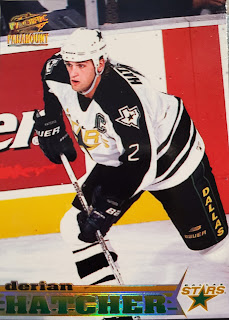 Derian has the distinction of being the first American-born team captain in the NHL to have their name engraved on the Stanley Cup.  His grit, skill, size, and toughness, were all qualities that made him on the game's great defensive forces.

With their Game 1 victory in the Western Conference Quarterfinals, the Stars would then go on to not only beat the Sharks, but also the Edmonton Oilers in the next round. Once they got to the Conference Finals, the Detroit Red Wings were too much to handle and Dallas dropped the series 4 games to 2.

The following season brought better fortune for Derian and the Stars as they won the Cup against the Buffalo Sabres.