Yes, that's right.  I'm still collecting Eric Tangradi cards.  The Winnipeg Jets winger that has spent more time off the ice than on this year is still part of my personal collection.  I remember posting a loooonnnnggg time ago about Tangradi's first goal as a Jet.  That was so long ago now and he only has one other to match.  He has played in 36 games so far this year, has 4 points and when healthy, has been relegated to 7-10 min of TOI as a 4th liner.

Despite all that, I still think he's got potential.  It's in there somewhere.  It has to be.  It's just buried under the dark memories of that vicious elbow he took at the hands of Trevor Gillies way back in 2011.  Eric just needs to get healthy, forget the demons, get more aggressive, and start putting pucks on the net.  Yeah, just like that.  Easy.

Ok, enough of me trying to convince myself this is still a good idea.  Here are some recent additions to my Tangradi collection (six months ago still counts as recent). 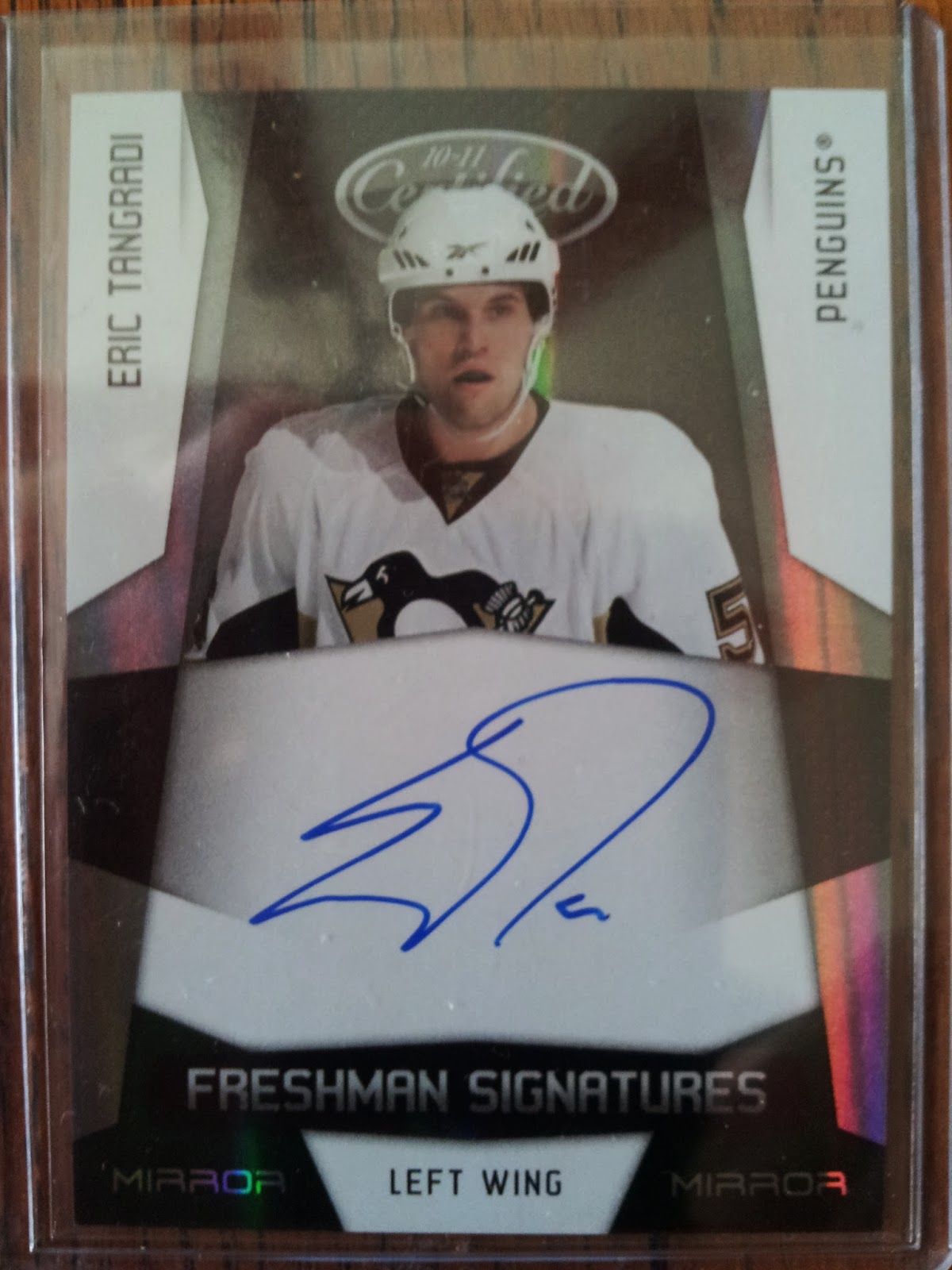 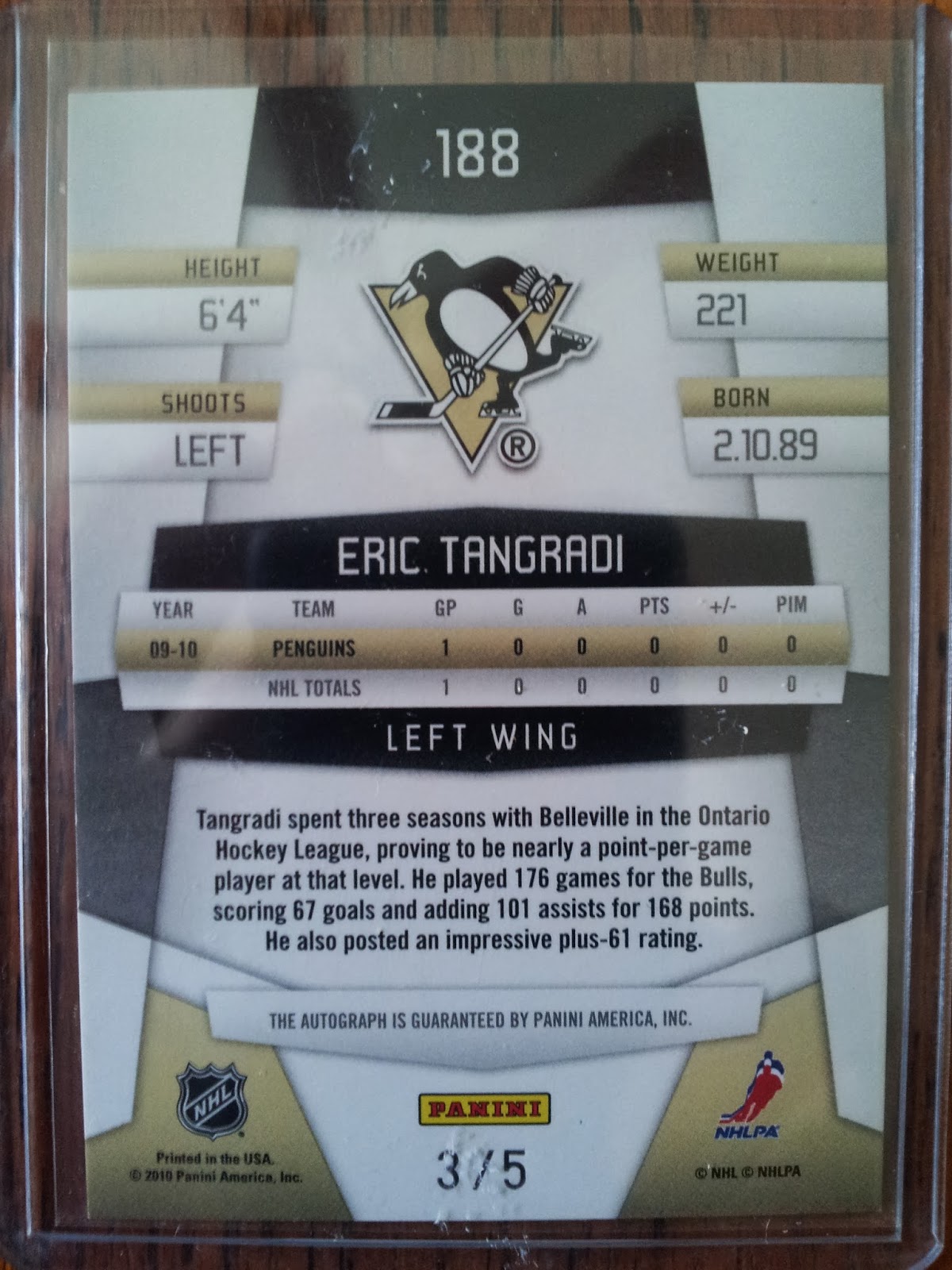 I figured I'd start with the big one.  I even scanned the back so you can see.  It's the Mirror Emerald version of the Certified Freshman Signatures card.  I have been hunting for this for years.  I only have ever seen one and it was being sold by a dealer for a ridiculous amount of money.  Patience paid off and I was able to successfully bid this one into my collection a few months back.  It's hard to see since I didn't scan this but instead opted for a phone photo.  I'll show my "rainbow" at the bottom of this post just for fun. 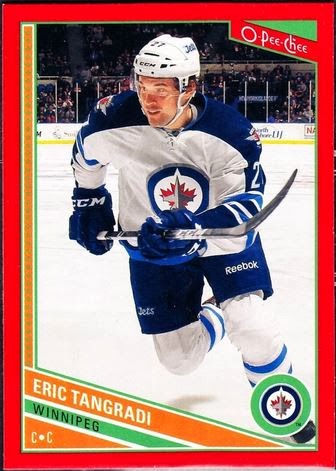 This is the Red Border parallel, for those not in Canada, and was part of Upper Decks' wrapper redemption program.  This year was the second year they offered Canadian collectors the opportunity to obtain a pack of six cards in exchange for 50 hobby wrappers at any Upper Deck Diamond Certified Dealer.  Because they were only available in Canada, obviously these are harder to come by in the states...unless you do Ebay.  Which I do.  And that's why I have it.  So there. 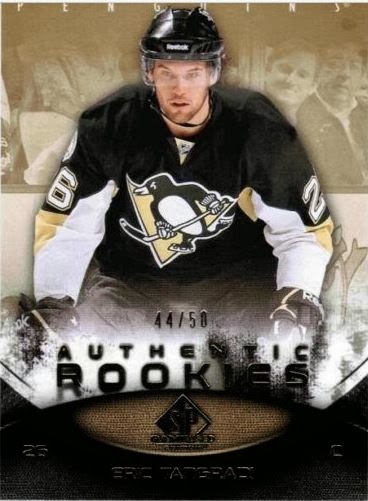 Here is the SP Game Used rookie of Eric.  I know I have shown this card before but I don't think I have ever shown a Gold version.  I picked this up for way less than I was prepared to spend so it was definitely a win for me.  I have the base version #/699, the Spectrum #/10 and now this.  The only one missing in the proverbial "rainbow" is the Gold Spectrum #/1.  I've never seen it and am not sure if it has been unearthed yet. 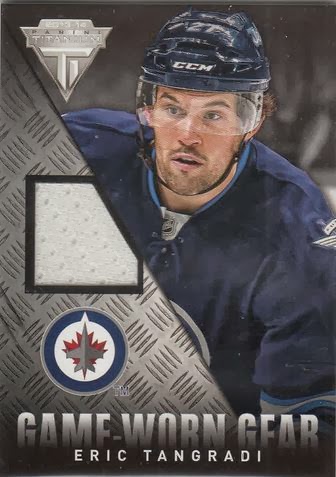 This is the newest, as in release date, card for my PC.  This comes from the just released 2013-14 Panini Titanium release and is a Game-Worn Gear card.  The swatch is white, boring I know, but it just adds to the ever-growing pile of Tangradi jersey's in my collection.  I have seen this also in black and I am in the process of obtaining at least one of those as well.

Eric's cards cooled off after his rookie season with Pittsburgh, mostly because he was relegated to Wilkes-Barre/Scranton and didn't get a lot of big team ice time.  The Pens were deep and I don't fault them for unloading Eric when they did.  He has played more in Winnipeg so his cards have began to pop back up in the deeper releases.  He's up to 199 cards now that I know of.  In 2013-14 alone, he has added another 11 cards.  One of these days I'll get around to updating my wantlist/checklist for Mr. Tangradi.  I'm also looking to add some items, other than cards, to my ET collection.  Stay tuned for that.

Oh, I almost forgot.  I was going to show my "rainbow" of Freshman Signature cards.  The only one I am missing is the Black version #/1.  Again, like the Gold Spectrum Game Used, I have never seen one of these so I don't know if anyone has ever released one into the wild.  Here you go. 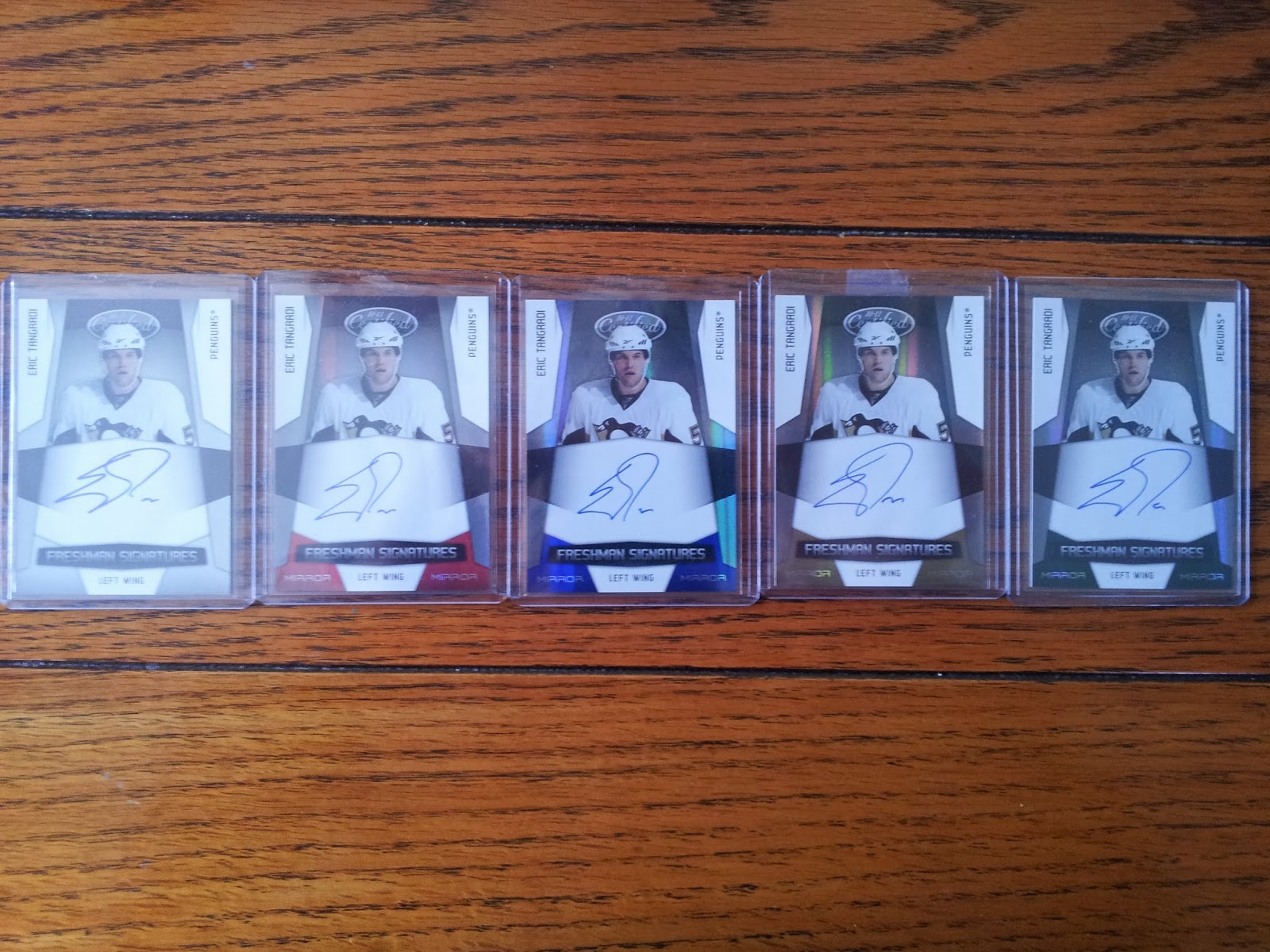 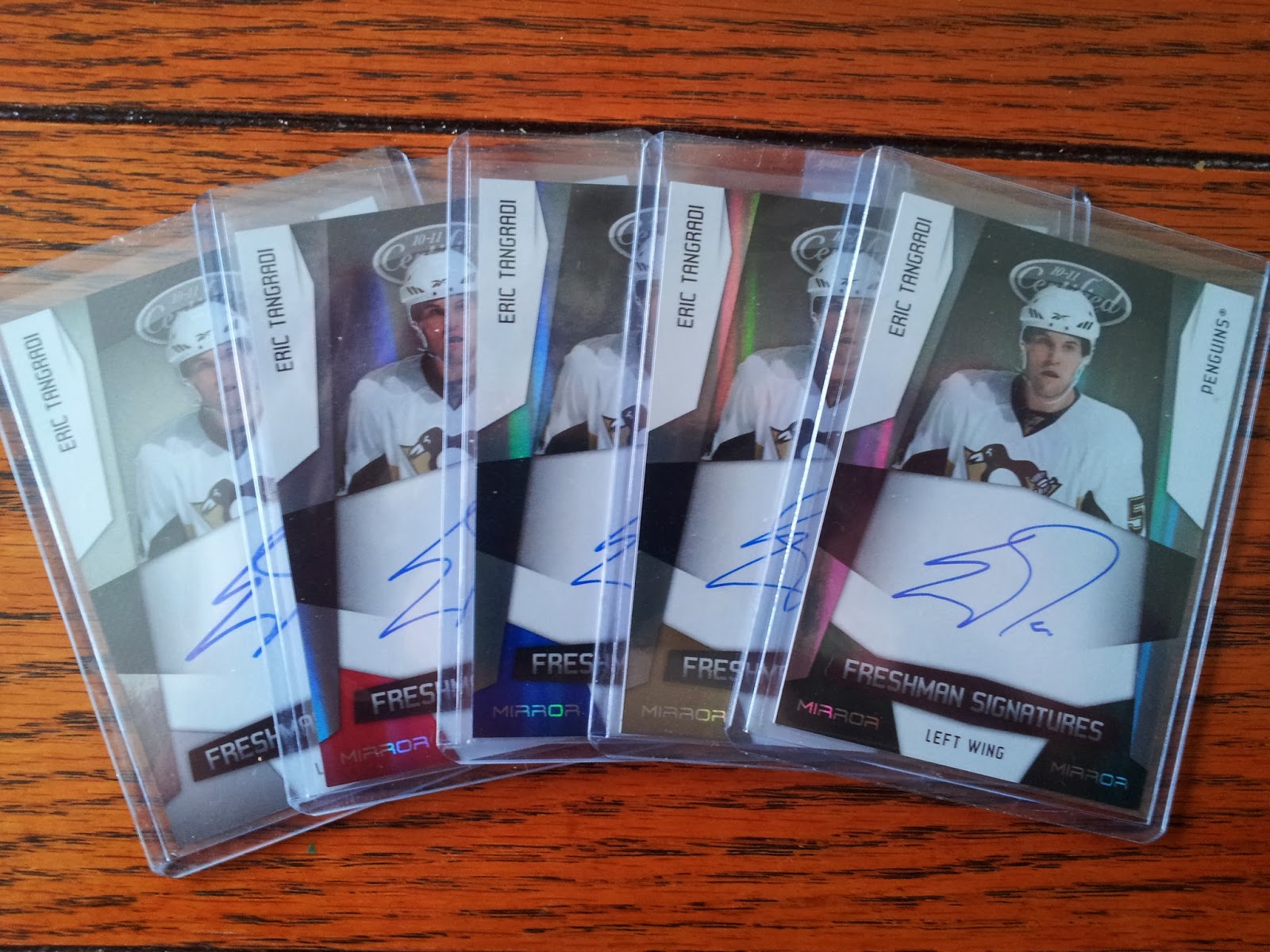 Here's a better shot at the colors... 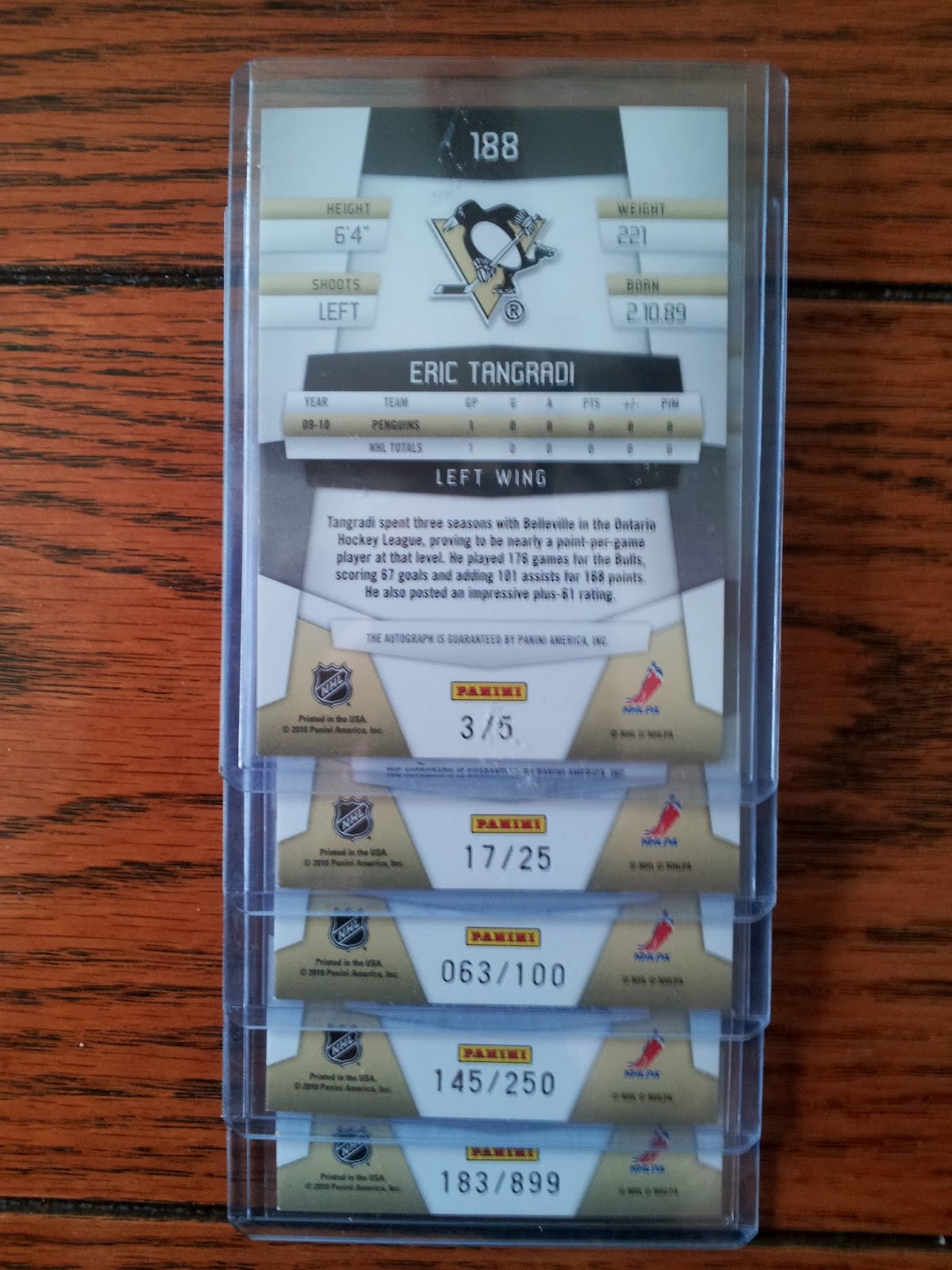 And finally the backs where you can see the serial numbering.  Like I said, the only one missing is the Black.

If you can read the back of this card, you can see he was a beast back when he played for Belleville in the OHL.  Hopefully someday he can get back to a semblance of himself.  Maybe then I can retire off this collection.  Stop laughing.
This Post Brought To You By dogfacedgremlin at 6:30 PM