Again With The Classics

Since I opened that awesome box of Panini Classics Signatures at the last show I went to, I've been drooling over the autograph checklist.  I can't say that I'm going to chase the entire thing but I am not ruling that out.  I may want to eventually put it all together or at least attempt it.

That's why I've been watching them on auction to see what is out there and how much it will cost me in the end.  Some "lesser" stars are going for a few bucks.  The "big" name guys are into double digits, some reaching into the $40-50 range.  The "huge" guys are pushing the hundred dollar mark.

With my new budget..."lesser" stars it is. 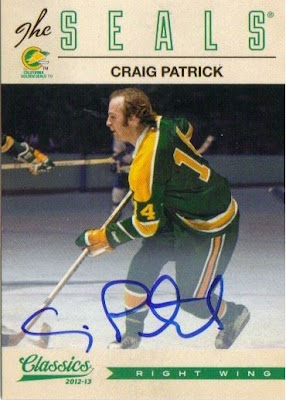 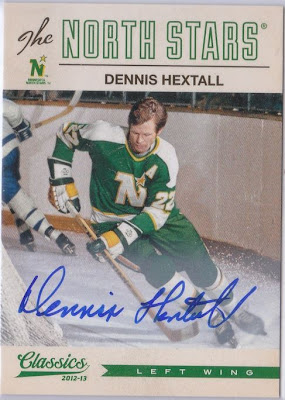 Long time Penguin GM, mastermind behind two Stanley Cups and former Golden Seal Craig Patrick as well as Dennis Hextall.  Hextall was also a former Golden Seal as well as a host of other teams.  He spent larger amounts of time as a North Star and Red Wing.  Ex-Flyer great Ron Hextall calls him Uncle Dennis (I don't know if he really calls him that). 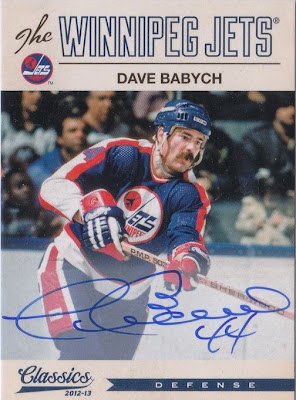 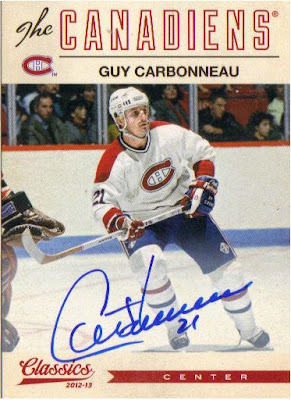 Here we have two guys that accompany their signatures with jersey numbers, in case you can't read their writing.  Dave Babych was drafted in 1980, a draft class with the likes of Larry Murphy, Paul Coffey, Jari Kurri, and Denis Savard (the Pens took Mike Bullard).  He was one of the most consistently solid D-men ever but will most likely never go into the Hall like those other guys because, well, he never won a Cup and never could match the offensive prowess of his junior career.

Our other auto is of Guy Carbonneau who, unlike his partner there, won three Cups and another three Selke trophies.  Carbonneau isn't in the Hall either because "shut-down" guys don't get any respect and Guy was one of the best ever.  No one in the HOF voting community cares about the guys that stop the opposing scorers, block shots, kill penalties, and make the locker room a better place. 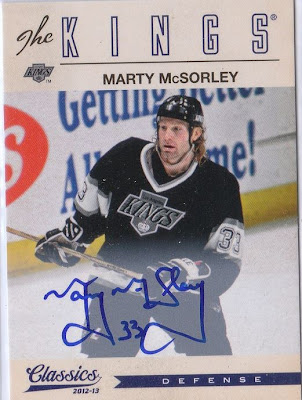 Finally, we have Marty McSorley.  Ahhh, the love/hate relationship much of the NHL players and fans share for Mr. McSorley.  I guess Marty's popularity depends a lot on whether you are also a Gretzky fan.  After Semenko was done in Edmonton, McSorley became Wayne's bodyguard, following him to LA as well.  The guy has his name on two Cups, almost had a third, but is more known as #4 all-time on the NHL's PIM list.  It's that reputation that follows any conversation about McSorley.  That, and the fact he tried to decapitate Donald Brashear (don't worry, DB doesn't remember).  If Dino Ciccarelli can be convicted of assaulting a player on the ice and still make it into the HOF, why can't Marty?
This Post Brought To You By dogfacedgremlin at 7:00 AM