This is going to be a short post as I really don't have much to say in terms of review one way or another.  The boys and I decided to break the boredom of a Saturday morning and head over to the Highland, IN Lincoln Center for their quad-annual community garage sale (and card show).  The amount of junk in this show each and every time astounds me.  I can't believe there are people out there that accumulate this much crap to be able to turn around and actually make a buck or two selling it.  It's simply amazing.

But I digress...there is a card show attached to this garage sale each time they open the doors.  The show has anywhere from 20-40 people selling their cardboard wares amidst the seemingly endless supplies of glassware, VHS tapes, and Elvis paintings.  I know I've talked about this show before here, here, and probably a bunch of other places.  So I won't bore anyone with the details.

While I was prepped and ready for a warm up to next week's Chicago Sun-Times Show in Rosemont, I wasn't expecting much and that's exactly what I got.  Believe it or not, the card dealers seemed to have been toned down a bit and most of them were replaced by guys with coins and toys.  I did find a few tables with stuff browse worthy but I didn't really find anything to bite on except at two tables.

The first guy had a table full of autos and GU cards of various sports, including about 1/3 of the table occupied by hockey.  I pickup up this little guy for a couple bucks... 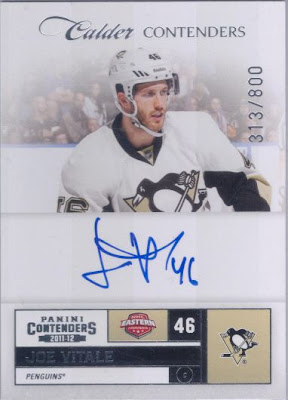 I'm sure this one will be added to my Penguin Auto Project collection soon.

The only other table I found was not a card table but a "junk" table.  I mean, it had some interesting items on it, but it wasn't organized at all and had giant piles of stuff in various parts of the table.  But like the cardboard sniffing bloodhound that I am, I found a shoebox full of cards.  The front was originally marked "1/2 off price marked".  That was crossed out and replaced with "All Cards $1".  That too was crossed out and replaced with "Single cards $.50 or 3 for $1".  I like the sound of that better.  Here are my three cards for $1.

The first one I found was an Alfonso Soriano card that my son didn't have.  He collects Soriano, although I still can't figure out why.  I didn't scan that one because after taking possession of it, I don't know where he put it or what he did with it.  For $.333 I don't really care either.

The card I was after was this one... 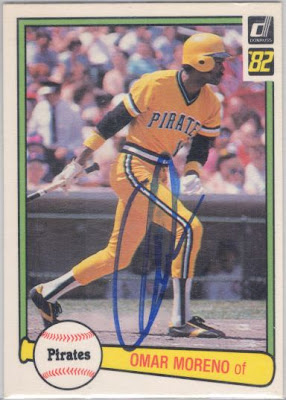 It appeared to be an on-card auto of former Pirate great Omar Moreno.  I didn't have a Moreno autograph and for thirty three cents I couldn't pass it up.  But the real question was, is it a legit auto?  I checked the interwebs when I returned home to find that it, indeed, looks like his auto...however, it only looks like his first name.  Most of the other autos of his show a distinction between first and last name.  I don't see that here.  But, that's not to say I don't believe it's still real.  It's on-card, meaning it was either a TTM or an in person signing.  If it was in person, I'm sure Omar was in a hurry.  It could have been done quickly, bunching itself together, and making it look like it was only his first name.  It could.

I needed a third card and couldn't find one to round out the 3 for $.50.  In the whole box, I couldn't find a single one.  So I settled on this one because it made me smile, bringing back memories.  It also sparked an interest in one of my sons as to how a person was able to play MLB and NFL at the same time.  Yes, folks.  I give you a wood border nightmare, otherwise known as... 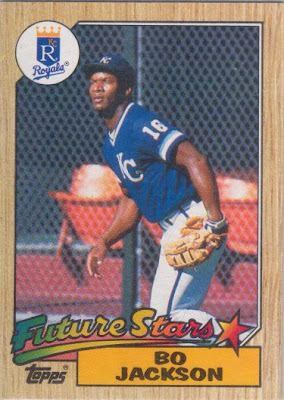 So overall, this show was a bust.  It it wouldn't have been for the lady with the $.50 action figure box, we would have all probably walked out dejected.  Instead, it was only me.  I just hope next weeks slightly larger show at the Convention Center will be much more fruitful.
This Post Brought To You By dogfacedgremlin at 2:00 PM