First, I'm shocked Kmart is still in business.  Second, I'm surprised they have any semblance of a card selection.  Third, I don't have any clue why I was in a Kmart.  Regardless, I saw this and couldn't recall ever seeing one before so I figured why not. 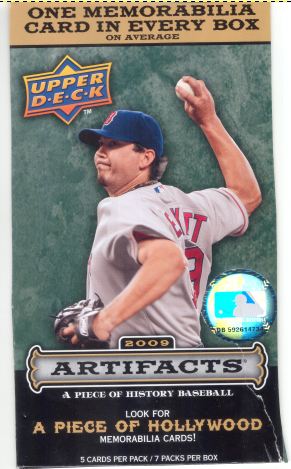 What caught my attention was the fact that this said it contained "One Memorabila Card In Every Box" and was marked with those nifty round red stickers signifying that this was indeed a clearance item and they were more than willing to let it go for $5.99.  How someone else didn't swipe this up at that price, even if it was probably going to be a crappy jersey card, I'll never know.  Oh, wait.  This was Kmart. 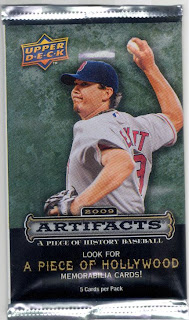 As you can see, there are 7 packs in a box with 5 cards in each pack...35 cards for about $6 comes out to about $.17/card.  I don't know if that is good or not but if this is anything like Artifacts in hockey, I will probably like it.

First, here is a sampling of the base cards and rookies... 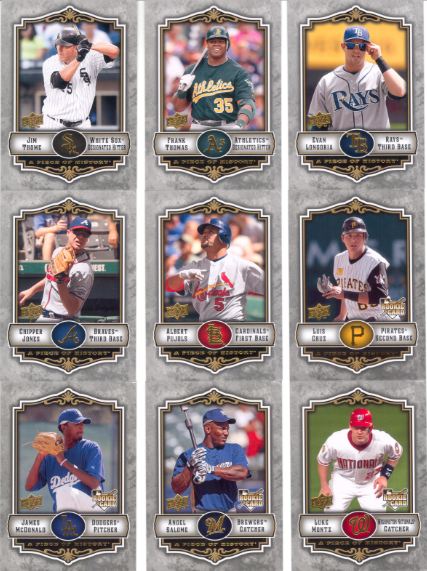 A couple comments here if I may.  I really like this design.  The marbleized grey and white borders look sharp.  It almost looks like smoke (much like the smoky/ice backgrounds on the hockey).  It's hard to see on the scan I think but along the inner border corners, there are flower-like design patterns too.  The overall feel of these is almost of a higher end product I think and even though much of the available space on the card is spent on the design, I don't think that really retracts from the images used for the players.  The "Rookie Card" logo seems kind of big considering the size of the photo but I think that is the required size by the MLB.   And is it just me or does Frank Thomas as an Oakland A just look wrong?

There is a subset of sorts in Artifacts called Historical Moments.  The borders are clearly a little darker than the regular base cards but they are numbered as part of the main set.  They are also all horizontally printed (from what I pulled at least). Here is what was in here... 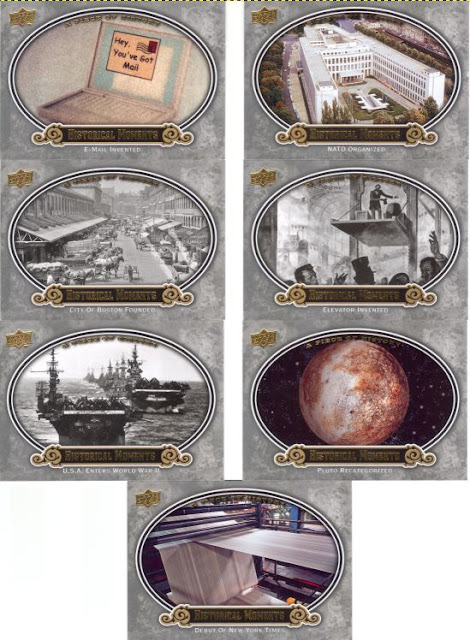 Finally, there were the "other" cards including my guaranteed (on average) GU card. 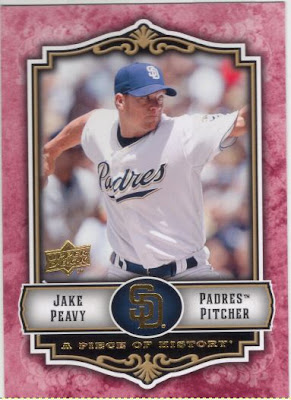 I had to look these up to see what the deal was.  Apparently these are red, not pink and they are not serial numbered.  I assume that means that they are the basic parallel.  There are also Blue, Gold, and Green versions of these cards for all you rainbow seekers.  Something else I learned when looking this up...most publications have this listed, not as Artifacts, but as Upper Deck A Piece Of History.  I did not know that. 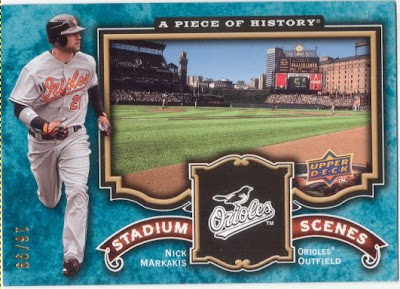 This is from the Stadium Scenes insert set.  This particular card features the Orioles, Nick Markakis and a scene from beautiful Camden Yards.  This one is the "Turquois" version numbered out of /99.  There are also Black, Blue, & Red, as well as jersey/auto variations of these.  The back features a write up on the park as well as mentioning that Nick  "lit up Texas pitching with 7 hits and 6 RBI in a three-game home series in July" 2008. 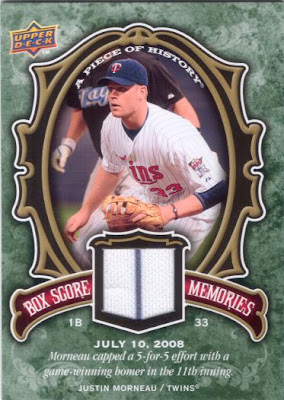 And the card I was waiting for...the dual patch/jock auto numbered /2 of Nolan Ryan!!  And as I opened my eyes, I was instead greeted with this little ball of fire.  If what I said before about the base card design not intruding on the photo was true, it's completely opposite here.  There is too much happening on the front of these cards, plus the swatch, rendering the photo as almost unimportant to the card.  I had to look twice to even figure out who it was...the player name is an afterthought.  Even Justin had to crouch down to fit into that oval.  There are all sorts of color parallel and serial numbered versions of this with and without the jersey swatch.  At least this has a piece of the pin-striping to make it not as boring.

If I was a baseball collector, I'd definitely build this set.  It looks very nice in a binder and there are all sorts of interesting inserts and parallels.  As it stands now, I'll keep the one lonely Pirate card.  The rest, who knows.

This Post Brought To You By dogfacedgremlin at 8:00 AM