Last night, in front of the home crowd in Dallas, Jaromir Jagr got his 1,000th NHL assist.  With that helper, Jagr becomes only the 12 player in the league to ever reach that milestone in their careers.  (It also helped that Dallas won the game, snapping Minnesota's 7 game winning streak.)


It's been a long time between assist number 1 and number 1,000.  Jagr started his NHL career in Pittsburgh when he was 18 years old (subsequently, I was 12).  When he took to the ice on Oct. 19, 1990, he tallied his first assist of his career against Buffalo on a goal from "Double Z" Zarley Zalapski.  Now, almost 23 years later, he gets number 1,000.  Here's a quote from an interview he did after the game...

"I never thought about any assists and points, I was happy to be able to play here. When I came here, I didn't think I'd have a chance to play here. The League was too strong and too tough for me. I kept working hard and I've had so many good players around me, they showed me the way of how to get better. I really was pretty lucky. I always said you have to be lucky with who you play with and I had a chance to play with so many great players."

Lucky indeed.  Of the other 11 guys who scored 1,000 career assists, he was teammates with four of them:  Ron Francis, Mark Messier, Paul Coffey, and of course, Mario Lemieux.

I picked up a few more Jagr cards for my PC last weekend at the Sun Time Sports show.  Now would probably be as good a time as any to share. 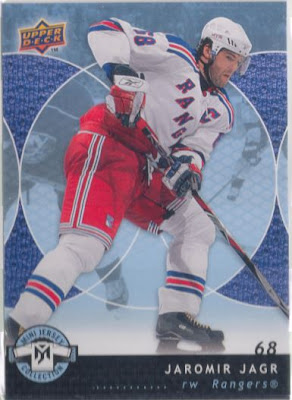 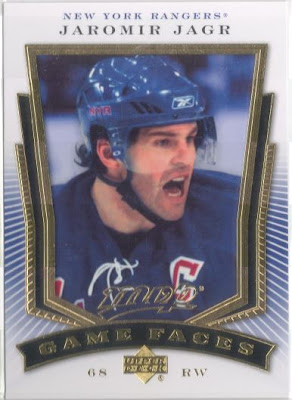 Here he's saying "I wish I would have never left Pittsburgh."
What?  That could have been what he said. 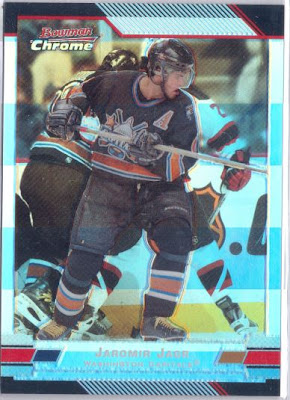 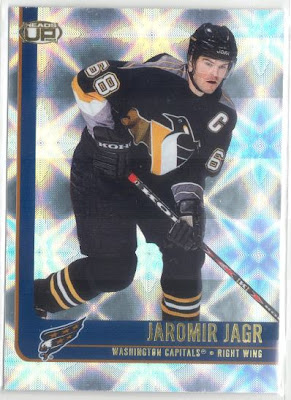 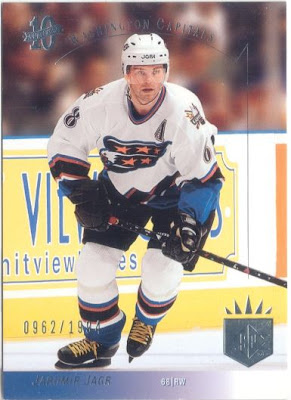 I saw this card and was puzzled at first.  The 1994 SP cards should have had Jagr in a Pens uni but here he was as a Capital.  Since I wasn't actively collecting, I was unaware that the 2002-03 SP set was a 10th Anniversary.  These were numbered out of the original year...1994, and there is that nifty "10" silver foil stamped in the corner.
This Post Brought To You By dogfacedgremlin at 10:37 AM