Randomness From Another Collector

In my last official post on here (well last before the last one), I made mention to the fact that a fellow collector had sent me some random kindness out of the goodness of his heart.  I know I haven't been very visible lately and I know I haven't responded to many people's queries but despite that fact, Paul over at Card Boarded made an effort to jump start my renewed participation in the cardboard community.

He had sent me some "random" Penguin cards that he had lying around, just because.  JUST BECAUSE is something that is very familiar in this collecting community.  How many times have any of the readers out there received a package, just because?  I bet that answer would be over half of you.  Sometimes, the JUST BECAUSE packages are the best.  This one is not an exception.

So, I thought I would take a moment and share.  I think you can click on the images if you want to see larger versions. 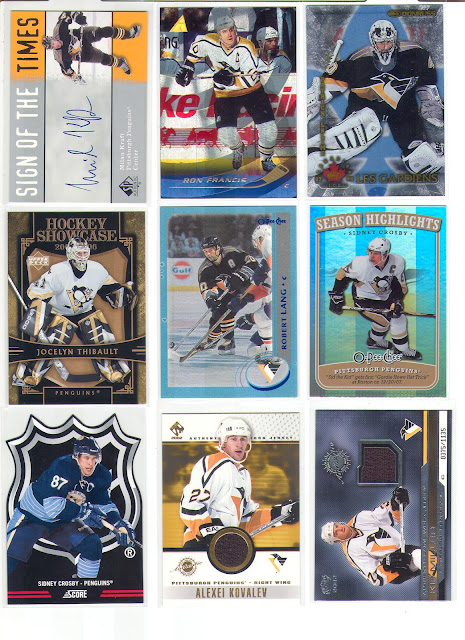 Ok lets break this one down, shall we?  From top to bottom, left to right.

1.  2000-01 SP Authentic Sign Of The Times Autograph Milan Kraft - Mom said if you don't have anything nice to say, well you know the rest.  Too bad.  Kraft was drafted 23rd overall by the Pens in 1998 and never lived up to the hype.  He only played for Pittsburgh in his NHL career but that isn't saying much because it only lasted for 207 games over four seasons.  In 2003-04 he put up 40 points but no one ever heard from him again.  Must have been buried under the Civic Arena.

2.  1995-96 Pinnacle Rink Collection Ron Francis - Francis is probably one of the most underrated players of all time, and one of my favorites.  Getting him on the team was a coup in and of itself but once they did, he was a pivotal member of the Pens for many years.  I love this card...it's foily.

3.  1997-98 Donruss Canadian Ice Les Gardiens Patrick Lalime (#/1500) - Lalime was in beast mode when he came to the Pens.  He started out his NHL career in 1996-97 going 16-0, a feat only accomplished by Ross Brooks and former member of Canadian Parliament, Ken Dryden.

4.  2005-06 Upper Deck Hockey Showcase Jocelyn Thibault - I think people forget that Thibault was on the Pens for a brief moment in time.  I kind of did before I saw this card.  But it all came rushing back when I remembered that he was brought in after the lockout, paid $3+ million for a two year contract, and then the old man broke a hip or something.  He couldn't win to save his life and was the reason Marc Andre Fleury got his chance when he did.  So I guess it wasn't all bad.

5.  2002-03 O-Pee-Chee Blue Parallel Robert Lang (#/500) - Lang played some of the best hockey in Pittsburgh and in Washington.  That is, of course, because he had his fellow countryman Jaromir Jagr in both lineups.  But you have to give it to the guy.  No matter where he went, Detroit, Chicago, Phoenix...he still could put up the numbers.

6.  2007-08 O-Pee-Chee Season Highlights Sidney Crosby - The "highlight" in particular on this card is in reference to a game on 12/20/2007 against the Boston Bruins.  Crosby scored a goal and an assist in the first period and then in the second, he threw down with former Penguin, Andrew Ference.  And that was the tale of Crosby's first (and only I'm sure) "Gordie Howe Hat Trick".  He has a little ways to go before catching Discipline Czar Brendan Shanahan and his NHL leading 17 GHHT's.

8.  2001-02 Pacific Private Stock Game-Used Gear Alexei Kovalev Relic - I'm a sucker for GU cards.  I don't know why.  Whether you think most of them are fake or not, I don't really care.  It's more of a fantasy thing I guess.  Regardless, this is a black swatch of Penguin sweater for Mr. Kovalev.  How do I know this?  I don't.  But at this time in history, he had only played for the Rangers and the Penguins.  Last I checked, Rangers sweaters didn't have black.  But what do I know?  I always liked Alex.  I liked his style, I liked his finesse, and I liked the way he played the game.  Both times he played for Pittsburgh.

9.   2001-02 Pacific Game Worn Jersey Kip Miller (#/1135) - Very cool.  Another GU card.  This one specifically says on the back that it was worn during one of the 33 games Kipper played for the Pens during the 2000-01 season.  So there.  You can't argue with that.  Pacific wouldn't lie.  They are a fine, upstanding company with a strong history of quality products and a great trust in the collecting community and I think they will be around for a long time.  What's that, you say?  Cork?  But there isn't any cork in baseball bats... 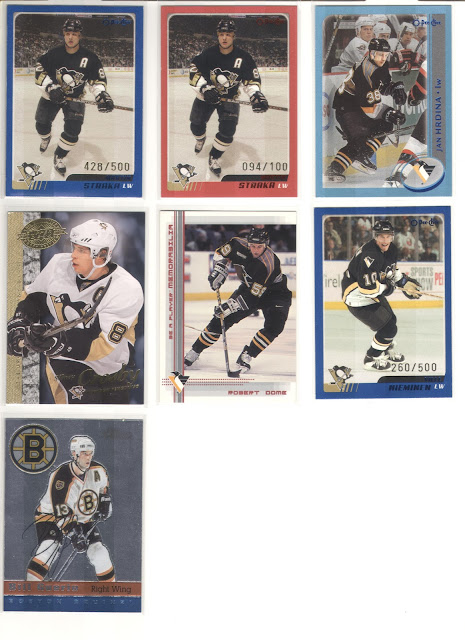 1.  2003-04 O-Pee-Chee Blue Parallel Martin Straka (#500) - I think Straka would still be a Penguin if it weren't for the broken leg thing.  He was a solid player for the Pens.  A team leader if you will.  And he had the numbers to back them up.  I just think everyone in the league gave up on him after the injury.  I think he still plays in Europe somewhere.

3.  2002-03 O-Pee Chee Blue Parallel Jan Hrdina (#/500) - Jan Hrdina to Scott Hartnell.  Ready...GO... The Penguins drafted Hrdina 128th overall in 1995.  They later traded Jan to the Phoenix Coyotes for Ramzi Abid, Dan Focht and Guillaume Lefebvre in 2003.  The Coyotes traded him again to the Devils for Mike Rupp.  Mike Rupp was signed by the Pens in 2009 but then went on the the Rangers in free agency last year.  He played in the Winter Classic against the Flyers and gave the "Jagr Salute" to the crowd after scoring which led to an altercation with Flyers thug and Pert Plus spokesperson, Scott Hartnell.  The morale of this story is, Scott Hartnell is an idiot.

4.  2008 Upper Deck 20th Anniversary Sidney Crosby - I don't remember exactly how one got these.  I think it may have been through hobby shops as a giveaway with purchase or something.  I don't recall if they were just loosely distributed or came in packs.  Probably just cellophane wrappers if I was to guess.  I have a few of these.  I believe I have multiple Crosby ones but so what.  I won't stop till I have 10 of everything.  Sal, help me out on that one. 10 of everything is perfectly normal, right?

5.  2000-01 ITG Be A Player Red Robert Dome (#/200) - Dome always fascinated me.  He helped Utah win the Turner Cup back in 1996, was then drafted 17th overall by the Pens in 1997 and basically faded away into oblivion.  He was always a solid player in the IHL and other sub-NHL leagues, and has been a pretty decent player overseas but could never really cut it in the NHL.  The card is cool though as it is a parallel that I'm sure I don't have.  It comes from one of those years I disappeared from collecting.

6.  2003-04 O-Pee-Chee Blue Parallel Ville Nieminen (#500) - The only thing I remember about Nieminen being on the Pens was that he was a major pest.  Teams hated him because he was that Matt Cooke kind of player who would constantly be all up in your face and wouldn't back down.  Well at least Matt Cooke before he found Jesus or whatever happened because he is a totally different player now.  But this is about Ville.  I don't know what this guy does now.  Maybe another player that went to the KHL, I don't know.

Thanks again, Paul.  Your cardboard cast-offs now all have a new, loving home.
This Post Brought To You By dogfacedgremlin at 1:11 PM