Who's Idea Was It: Hockey Heroes

Who's idea was it to make these impossible to find in boxes? 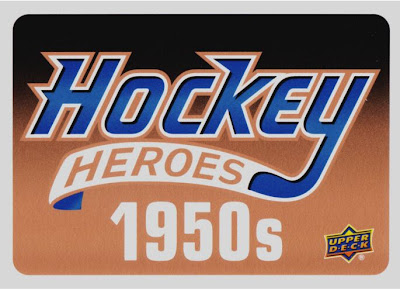 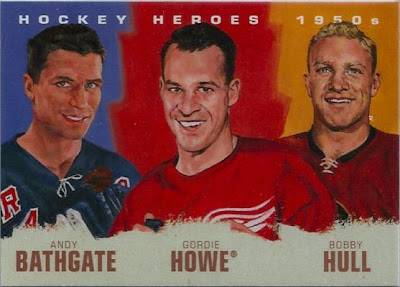 The odds are 1:600 packs that you will get one.  That comes out to about 1 every three cases or so.  That's completely absurd if you ask me.  I was lucky enough to win an online auction for the Art card you see here and came out of the deal fairly unscathed, cash-wise.  Sure its a nice looking card, even better in hand.  But is it 1:600 nice? 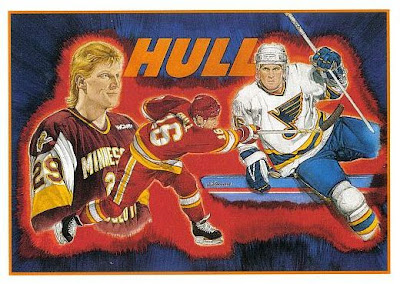 In the beginning and for many years, the sets were single subject driven.  I remember the first set in 1991-92 with Brett Hull as the subject.  Even back then the Header cards were practically impossible to find.  But I can tell you I do remember seeing them pulled from packs and their owners being less than thrilled with their discovery.  In fact, I can recall quite a few friends abandoning them since to a novice, younger generation collector, they just looked like an advertisement with no picture.  And who wants that?  The Art card was actually a checklist and was fairly easily found in packs.

Over the years, Upper Deck did a nice job with these sets, including them across the board in all of their sports releases. 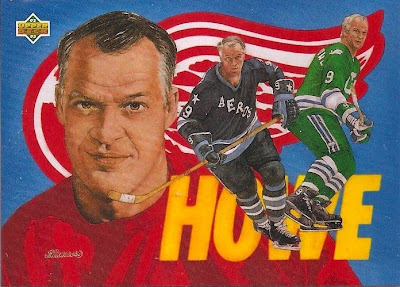 In 1992-93, they chose Wayne Gretzky for the Low Series and Gordie Howe for the High Series, both with limited insertion of the Header cards. The Art cards were checklists and were pulled fairly regularly although I don't remember ever getting the Howe except years later as a single purchase from random boxes at card shows.  My scanner cut off the border for some reason on this one. 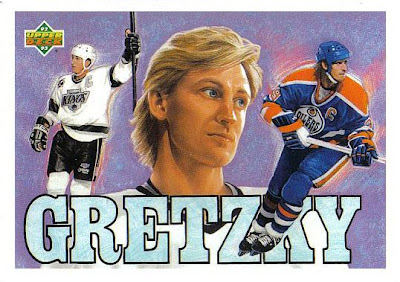 In 1993-94 they mixed it up a bit with a Future Heroes set featuring younger stars in the making of the NHL.  I don't think the Headers were short printed however, because I remember getting them quite a few times (or maybe I was just lucky). 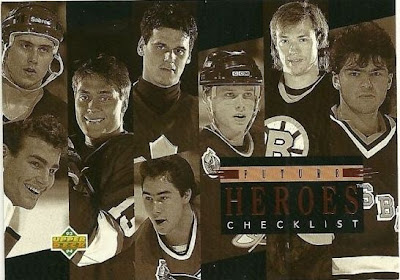 Here is the Art card which isn't really art at all; more like a photo collage (scrapbooking before it was cool; okay maybe it was never cool).  Check out all the talent featured here.  You have Jagr, Lindros, Mogilny, Selanne, Bure, Potvin, Falloon, & Juneau.  How many sure fire Hall of Famers do you see in there...3? 4? Maybe even 6?  Realistically, I would definitely pick 4 and you may even be safe with 5. 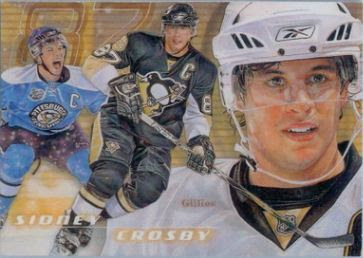 After that season, we didn't see this set emerge again until 2008-09.  Why?  I don't think anyone really knows.  There were a number of sets mixed in to the main release with "Heroes" in the title, such as Lord Stanley's Heroes, Highlight Heroes, Hometown Heroes, or Hat Trick Heroes, but no true Hockey Heroes set to speak of.  That's 15 years without a Heroes set.  Imagine all the other subject material that could have been printed...Lemieux, Bourque, Roy, Bobby Hull, Mike Bossy, the list is endless.


Sidney Crosby was the subject for the 2008 resurrection of the set and was only included in Series I packs.  Like the original release in 1991-92, there was only one set released.  Above is his Art card.  I never pulled one.  I don't know anyone that pulled one.  Other than on Ebay, I've never even seen one in person.  I imagine the collation was similar to this years set although I am not real sure.

The following year split it up again with Martin Brodeur in the Series I set... 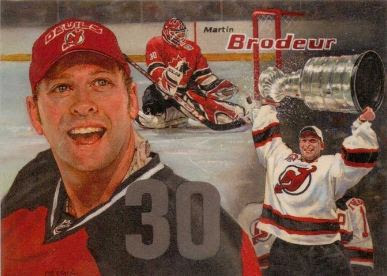 and Mark Messier in Series II. 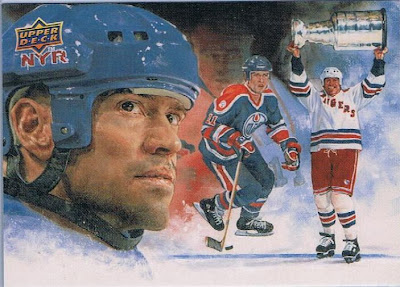 Again, I have neither of these nor have I ever seen them anywhere but the Bay.  They, along with the Crosby, ditched the white border for a full bleed portrait that is really a nice touch for such a difficult card to pull.

2010-11 chose Steve Yzerman for Series I and Bobby Orr for Series II.  Below is the Bobby Orr Art card featuring "The Goal".  Of course it's just like the others...never seen one live and in person. 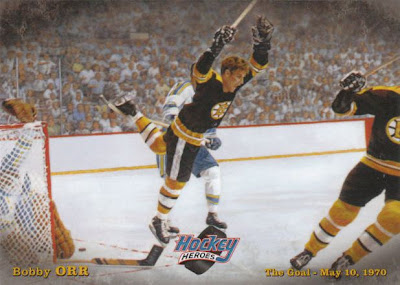 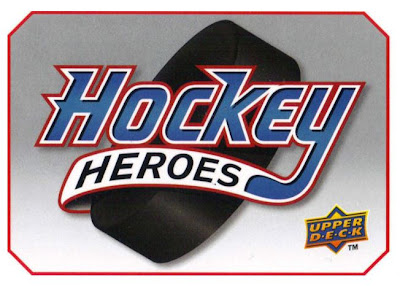 To the right here is the header card for the Yzerman set.  It's been pretty much the same every year since the inception of the Hockey Heroes.  The design really hasn't changed that much other than some subtle adjustments to the borders and font.  I actually pulled this one from a pack in one of those multi-repacked value boxes from Meijer a year or so ago.  Needless to say, I didn't throw this one away.  It is in with the rest of the cards from the set.  I have actually had a harder time completing this base set than I did finding the Header.

This Post Brought To You By dogfacedgremlin at 10:51 PM