As the Pens are heading out of the playoffs, my focus on hockey cards could be facing it's annual lull...

Awww, who am I kidding?  I have no lulls in collecting.  Even when I am bored with it sometimes, I find something to re-spark that interest.  At any rate, I picked up a few more for the PC off the Bay over the last week or so that have found their way to my humble abode.

As an unrelated, well somewhat related, side note; I have been noticing a lot lately that sellers are starting to bring back the ever popular PWE, or Plain White Envelopes.  I have gone about a year or so without seeing a single one of these but in the last two weeks I have received 4 of them.  I generally haven't made a big stink about these because for the most part, the PWEers will package the items well enough that their containers haven't led to their demise.  Mostly that's because they are only single cards and really haven't taken much abuse.  But there is always that chance.

I am more bothered by the fact that for most auctions, shipping prices have increased in order for sellers to off set the new Ebay seller charges.  As an occasional seller, I get that.  What I don't get is how anyone can charge $2.50 or more (one was actually $3.75) for shipping and send it in a PWE.  That, my friends, is ridiculous.  Especially when you get the envelope and happen to notice that the shipping cost was barely a buck.  I know what you are all thinking...So don't bid.  Yeah that's one option but when you find stuff that you don't normally see very often and it would make a nice addition to your PC, as a collector, you have to bid.  You have to.  It's a law.  I know none of "us" are the culprits here but I just wanted to voice my concern.

So back to the subject at hand.  Let's show off some new PC stuff. 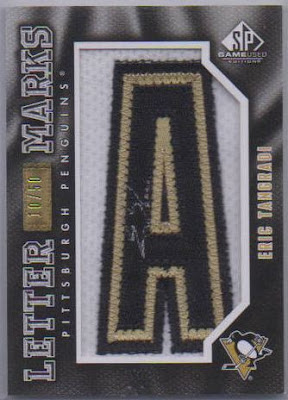 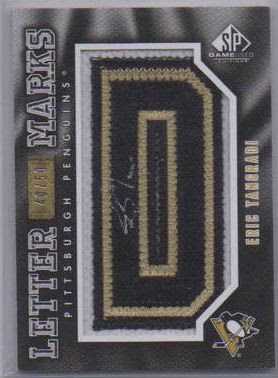 Here are two more Letter Marks cards from SPGame Used for my Eric Tangradi collection.  Finding one of these is a feat in and of itself.  But two?  That's ludicrous.  Fortunately, the same seller had both.  I now have 2 "A's" and this "D".  I now need T, N, G, R, & I.  I think I mentioned on here once about the "T" that I had won but it was conveniently lost in the mail.  That's ok, though.  There are 49 others out there and one day I will snag one.  I just hope it is before he gets traded to another team.  He played some good hockey in the playoffs so he might have a chance at staying on for another year.  I hope he can make a roster spot next season but with the talent in the Pens farm system, that's never an easy task. 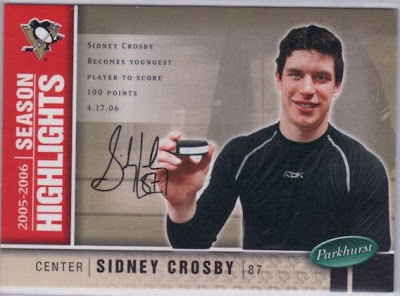 This is one that I was quite happy about.  It's an 05-06 Parkhurst Season Highlights card of everybody's favorite diving whiner, Sidney Crosby.  I saw this card and noticed it looked quite different than the one I thought I already had.  First, the "Season Highlights" block on the left side is red instead of the tan color on the base card.  Second, you can see right there next to the puck he is holding.  Yeah, that's an autograph.  But...not a real autograph.  The card is #586 in the set but this one is serial numbered #/100.  FOr some reason, Parkhurst included a Facsimile Autograph parallel set that were serial numbered.  I'm not sure what genius at Upper Deck came up with this idea back then, especially considering there are Signature cards included in the basic print run.  Maybe they just got bored with different borders or foil stamping.  I don't know. 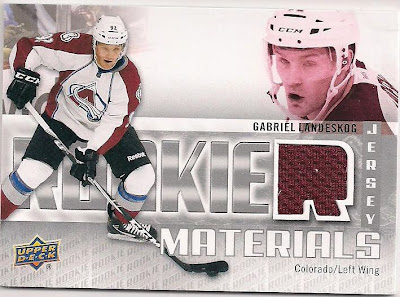 I know GU cards have lost their luster (assuming they had luster in the first place) but I still like them.  I like Rookie Materials cards even better.  There is something about getting that little piece of jersey from a guy just starting their career that is satisfying as a collector.  I'm not a Colorado fan/collector nor am I on some crusade to start a Landeskog collection.  But I couldn't resist making a play for this at a couple cents and was fortunate enough to get it.  After busting about a half a case of Series II this year, I am surprised I didn't pull this one on my own.  Regardless, I guess this guy is kind of good or something...

- Lead Colorado in goals (22), plus/minus (+22), shots (267), hits (216) and game-winning goals (5-tied).
- Is the only Avalanche player to appear in all games.
- Set the franchise rookie record for shots on goal with 267.
- Is the youngest player in franchise history to score an OT goal (19 years, 110 days).
- NHL Rookie of the Month for February after leading all rookies with 13 points (7g/6a) in 12 games.
- Had a six-game point streak (5g/5a) from Feb. 17-27, the longest streak by an Avalanche player this season.
- Set the franchise rookie record with shots on goal in a single game, nine vs. Vancouver and again at Winnipeg.
- Represented the Avalanche at the 2012 NHL All-Star Weekend in Ottawa, participating in the All-Star Skills Competition on Jan. 28.
- Youngest Swedish-born player in NHL history to score a goal.

He is one of the three finalists for the Calder, which has already been chosen but won't be announced until the awards show.  If you ask me, he should be the front runner because I think he meant more to his team overall.  In the end, I think the Nuge will get the nod, though, with the better points per game.
This Post Brought To You By dogfacedgremlin at 2:51 PM

Email ThisBlogThis!Share to TwitterShare to FacebookShare to Pinterest
Labels: ebay pickups, eric tangradi, Gabriel Landeskog, penguins are out of the playoffs, shipping in PWEs, sidney crosby