To continue the saga of my 11/12 ITG Enforcers box, I give to you the final installment of my box break.  Part 2 features the real "hits" of the box.  I previously called all the cards in the box "hits" because there were only 12 cards and the entire print run of Enforcers is limited in production.  So really, even though they are technically base cards they are still "hits" in my book.

As mentioned in my previous post, each box of Enforcers contains 2 Game Used cards that could be from a number of insert sets.  The sets that ITG came up with for this release include Head-to-Head Combatants, which feature two heavy weight contenders that have squared off at one point or another; Instigator's, which feature those guys that tend to chip a little too much for the liking of the other teams; Tough Franchise Quads, which feature, of course, the same lineups of the Tough Franchise subset but with GU pieces of each player depicted. 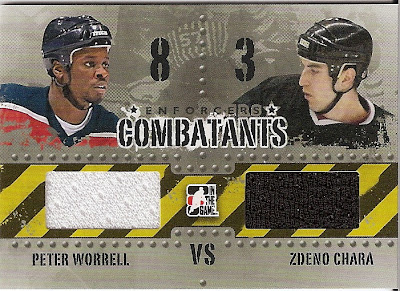 The first card was a Head-to-Head Combatants card featuring Peter Worrell and Zdeno Chara.  This was the second card featuring Worrell that I pulled.  This is also probably the 5th or 6th Chara GU card I have now too.  The card features two plain black and white swatches but the design of the card is really well done.  These two tussled on a number of occasions, both while Zdeno was a Senator (as you see in the picture) and as an Islander.  Of anyone that could stand up to Chara, Worrell was it.  While Chara generally towers over everyone else in the league, Worrell was only 2 inches shorter and about 10 lbs lighter.  You can find a bunch of their fights on Youtube. 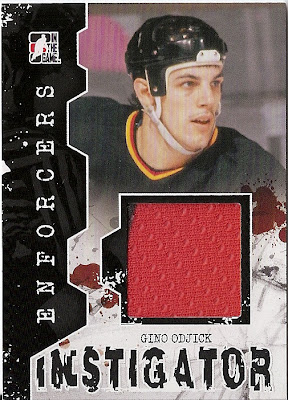 The second GU was from the Instigator insert set and features Gino Odjick.  Again, this is the second card of player in the same box as Odjick was on one of the Tale of the Tape inserts I pulled before.  This is a nice large swatch that actually features two colors, although you can barely see the top corner of black peeking through.  The Chief was most certainly an Instigator in his day.  He played much of his career on the line with Pavel Bure in Vancouver and bounced around the league for a few years thereafter.  In his 12 years, he racked up over 2500 penalty minutes in regular season and another 142 in the playoffs.  He amassing over 200 in five different years with the Canucks, of which three were over 300.

And now for the autographs.  A box of Enforcers yields 5 autographs that come from a checklist of about 80 different tough guys from hockey's storied history.  Here is my selection... 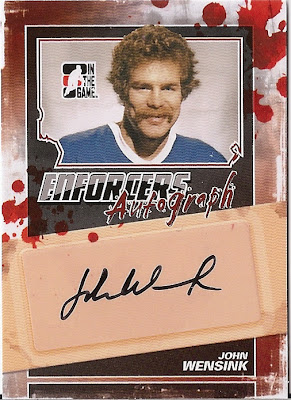 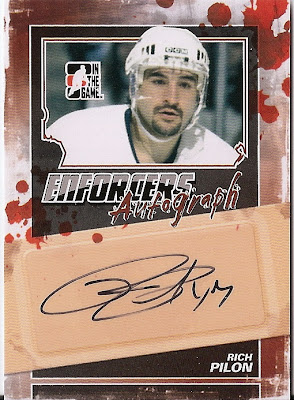 The first two were of John Wensink and Rich Pilon.  Wensink, shown here in a blue sweater (most likely Quebec) played in 403 NHL games from 1973 to 1983 and logged 840 penalty minutes.  He is probably remembered best for his fights where he would proceed to antagonize and challenge the entire bench of the opposing team.  He played with Terry O'Reilly and Stan Jonathan in Boston and helped make up a pretty feared core group of players.  He also sported a pretty sweet afro.

Pilon played 15 years, most of which for the Islanders and amassed over 1700 penalty minutes.  As much as I like the looks of this card, seeing Mr. Pilon brings back a bad memory.  The year after the two Stanley Cups in Pittsburgh, the Penguins boasted the best record in their history.  They faced the Islanders in the now defunct Patrick Division finals.  It was game 7 of the series and it all came down to one stupid shot in overtime by David Volek that knocked Pittsburgh out of the playoffs.  But that's not what I was referring to.

Pilon is the guy that unintentionally took out Kevin Stevens in the 1st period, knocking him unconscious.  Stevens went in for a check but was hit by Pilon's helmet visor which knocked him out.  As he collapsed, his face smashed into the ice behind all 6' 3" 230lbs of his unconscious body.  Very briefly, you could see blood pooling around his head on the ice. After that incident, Stevens had to have facial reconstruction surgery that required over 100 incisions and stitches, as well as metal plates being inserted to remold the shape of his face.  He came back the next season.  That's hockey. 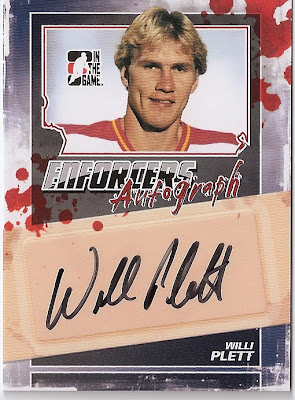 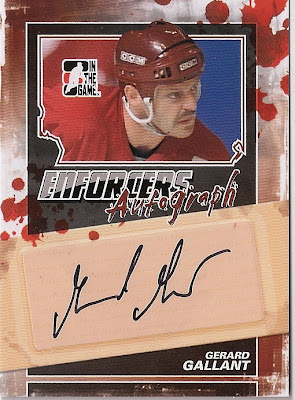 The second two autos are of Willi Plett and Gerard Gallant.  Plett, here in a Flames sweater, was a late bloomer to hockey.  But when he finally got his opportunity in Atlanta, he started off as a scorer, believe it or not.  He even won the Calder in 1977.  But once he made his way to Minnesota in 1982, the scrapper side of him kicked in and he became a fierce tough guy.

Gerard Gallant, or the Turk as he was known, was a much smaller guy at 5' 10" but he packed a big punch.  He played most famously on the line with Steve Yzerman in Detroit and racked up over 1600 penalty minutes from 1984 to 1995.  Just look at that face, ready to rip someone's head off. 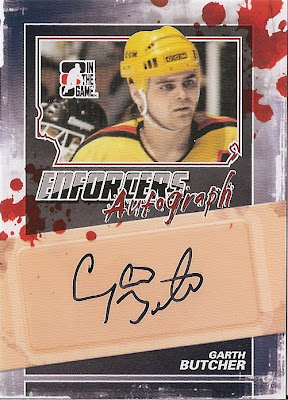 Finally, the last autograph in the box was Garth Butcher.  While Butcher wasn't necessarily a big time fighter when compared to the others here, he was still a scraper on occassions.  He finished his career with over 2,300 penalty minutes after almost 900 career games.  Where he lacked in fighting prowess, he made up for in his ability to goad his opponents into taking stupid penalties.  He spent most of his career with Vancouver and was their career PIM leader until Odjick came along.
Butcher was eventually part of that ridiculous trade with St. Louis, along with Danny Quinn, in 1991 for basically all the Blues' second line scoring aside from Adam Oates and Brett Hull.  They gave up Cliff Ronning, Robert Dirk, Geoff Courtnall, and Sergio Momesso and were never the same again.  The North Stars knocked them out of the playoffs in the second round and then went on to go to the Stanley Cup Finals that year.  (although they were destroyed by someone in that playoff...hmmmm, who was it again...oh, yeah...The Pittsburgh Penguins).
And that is it.  12 cards of some of the toughest guys in all of hockey.  If you ask me, I think this was a great value at about $5.00 per card.  As I had said in my original post, there aren't many autos of the guys featured here available in other products and you don't often get a chance to see these players in public appearances either.  As always, the GU pieces are large enough to be meaningful, as ITG constantly strives to achieve.  The designs are great and the production quality is second to none.  All this...WITHOUT AN NHL LICENSE!!!  You hear that Upper Deck?  Why can't you do a non-licensed product for other sports without screwing it up?  Take notes, people.  Geez!!
Enough about that.  I loved this product.  I will most certainly pick up more.  Especially if it keeps this price tag.  Although, I heard a rumor/truth that ITG was officially sold out of this product after about 20 days on the market.  Dealers still have it in stock, but for how long, I don't know.
If anyone is interested in trading for any of these, I would be more than happy to discuss.  Let me know.
SIDENOTE:
Interesting note about Pilon...he is one of the two defensemen getting smoked by Mario Lemieux on the new statue in front of Consol Energy Center in Pittsburgh.  I posted the video the other day.
This Post Brought To You By dogfacedgremlin at 7:48 PM