Some PC Pickups By Accident

So I've had quite a few opportunities, as most of you already are aware, to purchase larger collections from ex-dealers and collectors that have bailed on the hobby.  Most of them have been turned down but occasionally I lose my ability to make rational judgements and pull the trigger.  Piles, and piles, and seemingly endless piles of cards, cases, boxes, and albums have been piling up all around the house as I attempt to dissect that last large collection I acquired.

Of course if another one like this came my way, I would politely decline and walk away.  Of course I value my sanity and potentially my health (considering my wife could kill me in my sleep) so the logical answer is no thank you.  Of course that's why I failed to listen to those voices in my head and I went with my gut once again.

This time, it wasn't a 40 ft. moving truck full of stuff though.  It was just one box.  One, singular, unitary shoe box (not the kind that stores shoes).  One shoe box filled with GU and Autos.  A fellow collector was in need of some scratch since, like many of our friends and loved ones, has been out of a job for a while and cards don't pay bills or put food on the table.  So, as an act of humanity toward fellow man (and collector), I helped a guy out.  Plus...400 GU/Auto cards for well under a buck a piece isn't a bad deal.

Eventually I will start to catalog them all and share them with the masses, but for now, I just wanted to share some PC cards that ended up being in there and I didn't know it.  Three in particular... 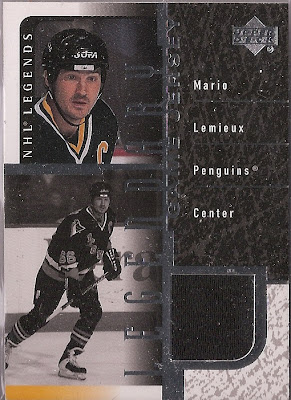 2000-01 UD NHL Legends Legendary Game Jersey J-ML
It is always nice to be able to pick up a Lemieux GU on the cheap.  Usually when you see his stuff at a shop, online, or at a show, it is always priced at 4-5 times what I want to pay for it.  This one is quite nice despite the plain black swatch.  And a NHL Legends card is fitting today as Lemieux was immortalized in bronze on the concourse area outside Consol Energy Center in Pittsburgh today.  They held a ceremony around noon and unveiled the statue which features Mario in his patented "split the defender" move which he made quite famous. Here is the video in case anyone wanted to see. 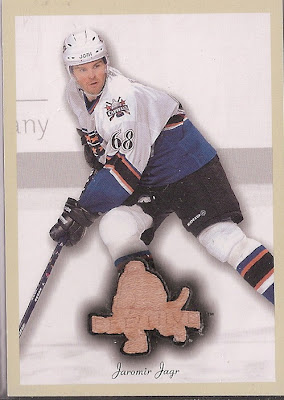 2003-04 Beehive Beige Border Game Used Sticks BE-35
Honestly, until I opened this box, I was unaware that these even existed.  This set eluded me (although I do have some singles here and there) somehow.  Probably never seen it because I wasn't actively engaged in teh hobby or in procuring any more Jagr.  I was still pretty jaded at that point about him leaving for the Capitals for some beads and small pox infested blankets.

The cards look really cool, in my opinion.  The GU piece is of a game used stick that was cut down or shaved and die cut into the Beehive logo with the "Bee Hive" stamp across it.  They aren't serial numbered but considering that I haven't seen these at all, I doubt there are many out there (and if there are, they are probably in collections...just speculating).  These were issued in Beige Borders, Red Borders, and Blue Borders. 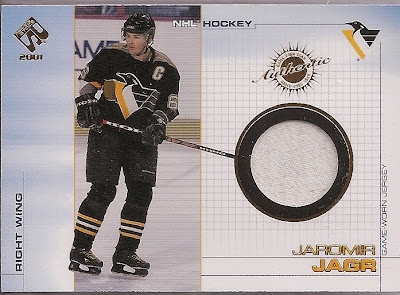 2000-01 Private Stock Game Used Gear #89
I have quite a few of these already but not the Jagr.  I've seen this with a black swatch a bunch on Ebay but I have never won the auction.  Now I don't need to worry about it anymore.  Too bad this wasn't the Patches version numbered out of 388.  Those were a much harder pull back in the day and I only remember ever seeing one cross my path.  At the time it was $60...way too pricey even then.  The card itself isn't very exciting.  It's kind of plain and unassuming but nonetheless, it goes well in my PC.
This Post Brought To You By dogfacedgremlin at 8:28 PM