Fun with the Golden Giveaway (or the opposite of fun)

I have a bunch of Topps Golden Giveaway cards.  I say a bunch because it is a bunch to me.  To you, it may be a few, or a couple.  But to me, a non-baseball collector that still buys the Topps flagship stuff every year, it's a bunch.  14 to be exact.

Now that the Golden Giveaway site is live, up and running (for now), I have decided to give it a shot.  My first plan was to try and sell these on the bay but that never works out as expected.  So rather than have to pay $2.50 to ship these to someone that won them fair and square for $.99, I figured I'd enter them and see what happens.

This year, for those not in the know, the premise is kind of simple.  You enter the codes and win player or team coins that are once again trade-able in the virtual trading area of the site.  You can also win some of the die-cut cards that have been issued just for this promotion.  The first 100 people to enter 200 codes will win a complete set of Golden Moments Die-Cuts.  Also, they have apparently upped the ante, with the addition of a 1/1 card with an actual 14K piece of gold embedded in it, to the mix. I'm definitely not in the running for that but it will be interesting to see what kind of cards I can win.  I've read all the negative comments so far but I am going to judge for myself.  Let's share.

With my first ever Golden Giveaway promotion redemption card...(drum roll, please)  We have... 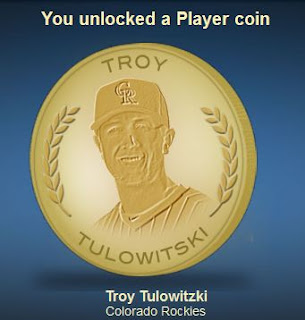 Troy Tulowitzki.  Ummmm.  Ok.  I think if I get enough of these I'll have them shipped.  It will probably cost a bunch but these look kind of....wait, what?  You mean these aren't real coins?  There is nothing to ship in this promotion except cards?  Well ok then, bring on the cards. 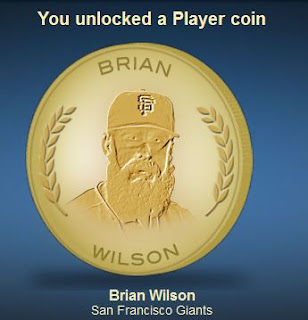 Ok, not a card but I think I remember this guy from an Arby's commercial or something.  Or maybe he just works there.  Wasn't he also a Beach Boy? 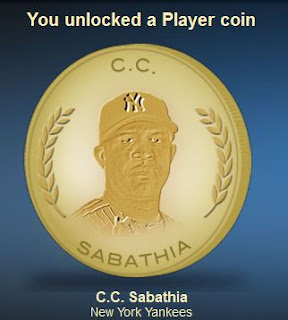 Sabathia is a large man.  This coin is not.  Still no card. 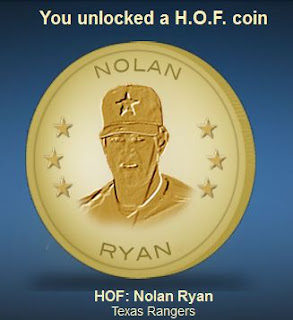 Alright this is different.  A Hall Of Fame coin of Nolan Ryan.  Nolan Ryan seems to be popping up everywhere in my Topps cards this year.  He is also in coin form.  Still no card. 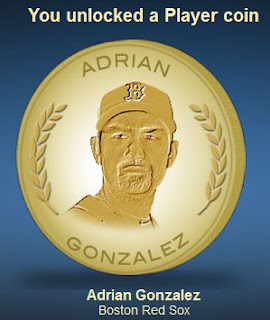 Not a card.  I have now put these all up for trade.

Blah, blah, blah.  Now this is getting boring. 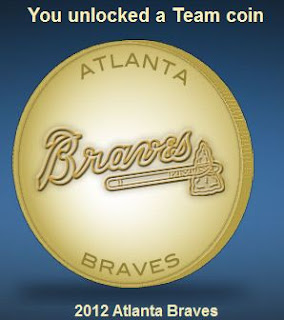 Oh, look. Something different.  A team card, I mean coin.  Still no cards. 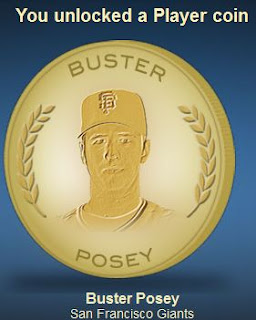 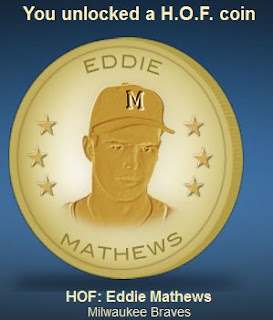 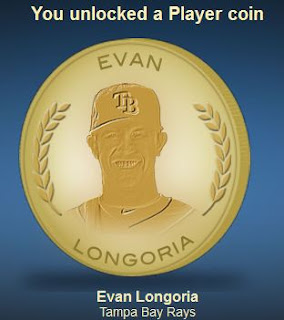 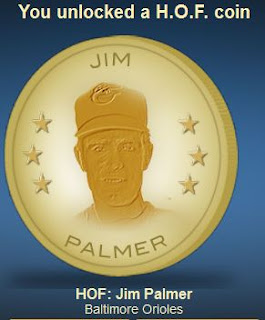 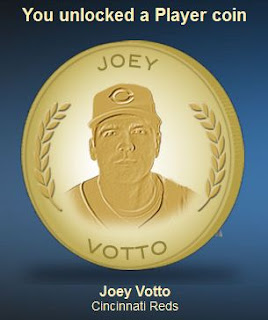 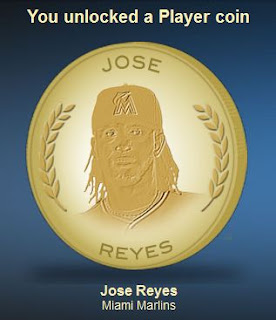 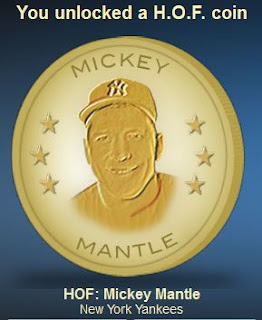 Hey it's the Mick.  Not in card form. 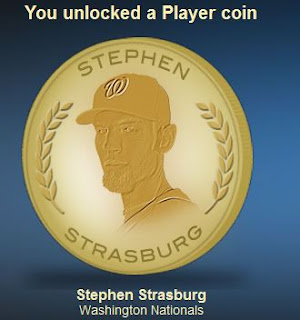 When you unlock 3 of any category, you get a free code.  I have a bunch of player coins, and at least 4 HOF ones so I get 2 free codes.  Ready for 2 more coins? 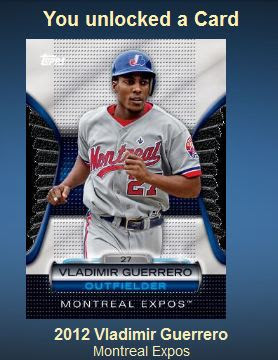 What's this?  A card?  An honest to goodness card?  It's a Vladimir Guerrero die-cut.  It looks kind of Topps Finest-y doesn't it?  I may want these if I get more.  If.
Free Code #2 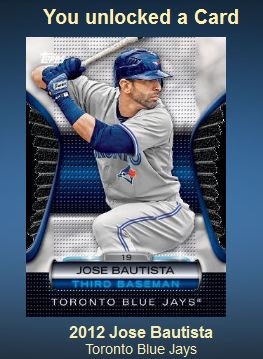 This defies all odds considering what every other collector seems to be reporting.  I've seen quite a few people claim to have unlocked hundreds with only a couple dozen cards.  Here we had 14 codes and 2 cards which comes out to 14% if I know math and I don't.  I'd say I did better than most but not as good as I expected going in to this thing.

I will say this, not as much fun as the Million Card Giveaway or the Gridiron Giveaway or the Diamond Giveaway.  I think Topps fell flat on this one.  The gold coins do nothing for me and there is no real incentive to collect them all once the free sets are given away and you hit the 30 mark for one coin type.  At least then you get the Willie Mays auto.  Ten of one type gets you a chance at a Griffey auto but that's only a "chance".

I'm not sure I will participate any more in this unless I pick up more codes in a pack or two but since I already finished off the base set of Series I, there is no need to pick up more.  I'm just working on some of the inserts now.
This Post Brought To You By dogfacedgremlin at 9:59 PM

Email ThisBlogThis!Share to TwitterShare to FacebookShare to Pinterest
Labels: 2012 Topps Baseball, baseball cards, code cards, coins are not cards, not a fan of the new Topps giveaway, topps golden giveaway