42 Years Ago Today, The Metal Was Born

This isn't a card post, although it could be cross related if we go back to my box break of 2008 UD Heroes Football.  Instead, this is a post about the significance of today on the world of music.


42 years ago today, Black Sabbath's self-titled debut album hit the shelves of record stores in the UK, marking the beginning of Heavy Metal.  Sure there are arguments over where the true "heavy metal" origin came from (Steppenwolf is credited with the term in "Born To Be Wild" and the Kinks "You Really Got Me" had all those fuzzed out guitars) but Sabbath created a sound that became the basis for every metal act thereafter. 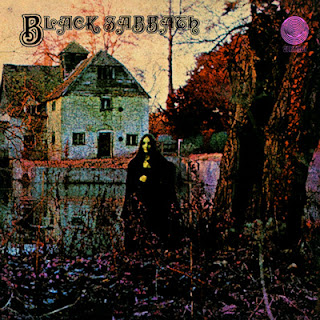 If you are only familiar with the "Paranoid" and "Iron Man" Sabbath, you don't know what you are missing.  This is one of the heaviest, thickest, albums ever created.  I just wish I was alive at the time to hear how heavy it was compared to anything in existence at the time.  I can't even comprehend the impact it had on the world of music.

I do still remember to this day the first time I heard it.  I was in third grade, it was one of my friends older brothers' records, and it scared the living crap out of me (in a good way).  From the opening bell tolls and the pouring rain of the impending thunderstorm on the title track, I was hooked.  When I started playing my own music back in high school, I chose to play the bass because of Geezer Butler's work on the Wizard and the intro to NIB.  I wanted to sound like that, play like that, create music like that.  I still haven't made it quite that far but it's an ongoing venture.  Maybe one day when I grow up.
This Post Brought To You By dogfacedgremlin at 10:33 PM