Just wanted to do a quick trade post from a package I got from my good friend Dave over at Wax Stain Rookie.  Dave does a nice job on all of his posts and video breaks.  You should check out his site if you don't already do so.


Dave and I have been working on a trade that would send another familiar face my way for a small sampling of recent rookies.  We finally came to an agreement and as his cards are still (assuming) in-transit as mine were rescued from their yellow paper sleeping chamber yesterday.  Here you go. 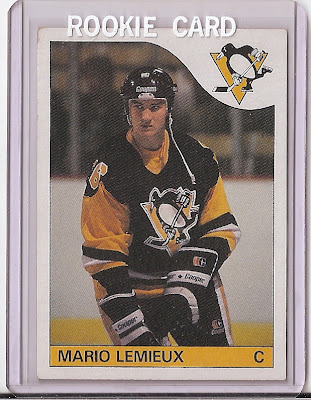 The answer is obvious.  TWO MARIO LEMIEUX ROOKIE CARDS.  This would be the second one I've added to the PC in less than two months.  My goal of four is half way complete.  This is another Topps version.  It isn't perfect but who cares?  It's a Mario Lemieux Rookie Card for cardboard god sake!  I think I may even try to get 6 of them now, and 6 O-Pee-Chee ones to go with it.

Also in the package were a few other cards for the old player collection PCs... 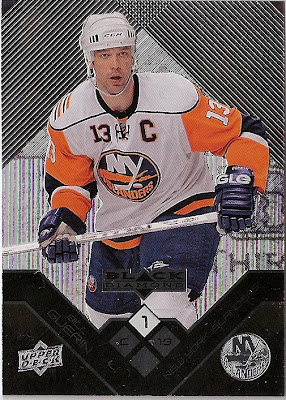 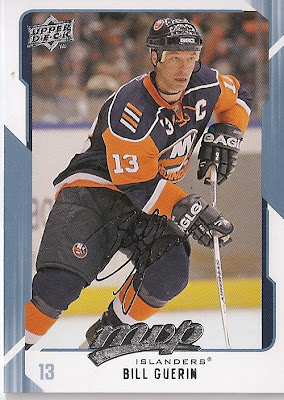 Both featuring his stint with the New York Football Islanders.  I do already have both of these but again, I don't care.  I have some sick obsession for Black Diamond cards.  I don't know why.  Also, I think I have enough of these MVP cards to try and put the set together.  Although, do I really want to start another set that I may never finish.  Heck, I might already have it started for all I know.  I'm so unorganized. 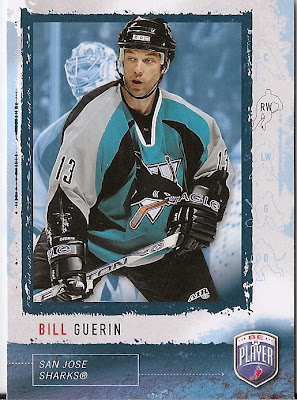 The BAP Billy is one that I did not have.  Guerin as a Shark are hard to come by, especially in the "non-frankencard" variety.  You know what I'm talking about.  Great addition to the PC.

Finally, he was kind enough to throw in one of the rarer finds.  It's the 1997-98 Pinnacle Mint Die-Cut Jaromir Jagr Ultra Buyback Redemption Update card; a true Ebay 1/1.  It has been updated to reflect recent events. 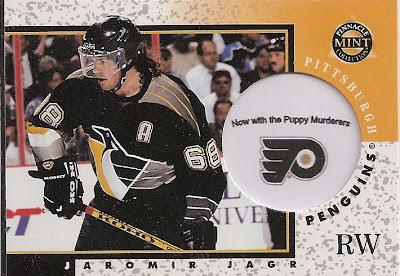 Thank you to Dave at Wax Stain Rookie.  Hopefully you will get the same enjoyment out of your end of the deal.

I'm finally taking a well needed vacation for about a week or so to go visit family so posting will cease.  Not that I have been regularly posting anyway but...

Thank you and good night.
This Post Brought To You By TheRealDFG at 10:40 AM