One of my target goals for the Chicago Sun-Times show last weekend was to see if I could find a box of 2008-09 ITG "1972 Year In Hockey".  I wanted to pick one of these up when they came out but my LCS decided not to pick this one up and the prices online were a little higher than I wanted to pay for a retro set.  The last Sun-Times show I attended back in November had none.  This time it was different.  D&A Card World had a booth there (2 of them actually) and brought with them 7 boxes of this retro themed set by ITG.  The best part...price was under $60 per box.  There are 200 cards in the base set which includes a subset celebrating the 1972 Summit Series between Canada and the USSR.  Since my goal was to build a set that I could display in a binder, the only option was to pick up a pair.

There was a plan put in motion between myself and Sal from Puck Junk to complete at least two base sets, one for each of us.  We would trade any doubles either one needed if we had to.  Well, mission accomplished, but not by any of my doing.

Sal picked two, and I picked two.  Mine were the last two on the pile on the left.  I think he mixed his up.  I should have followed suit because as far as the base cards are concerned, I pulled two boxes with the exact same collation.  The only difference were the "hits" and inserts.  So without further adieu, 1972 The Year In Hockey.

Box breakdown:  18 packs per box, 9 cards per pack, 200 card base set with 150 autographs at 1:8 packs, 5 non-memorabilia insert sets 1:8 packs, 1 GU card per box 1:18 on average.  You can check out a great selection of samples from this set on the ITG website's sell sheet section over here.  Here is what I pulled. 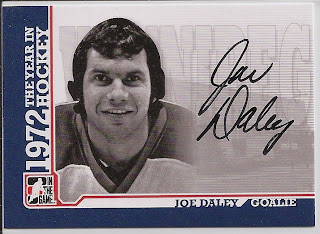 Joe Daley - Goalie for the Winnipeg Jets.  Those of you in Canada may know Joe as the purveyor of the very cardboard he dons in this picture (as in Joe Daley's Sports Cards).  But there was a time way back in 1972 that Joe was the net minder for the Jets in the WHA.  He was a great goaltender, helping lead the Jets to three championships.  Prior to those days, he spent time with the Penguins, Sabres and Wings.  In fact, he was the first pick by the Sabres in the inter-League draft in 1970.  Many people remember Joe as one of the last players to pick up a goalie mask. 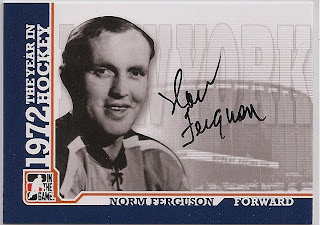 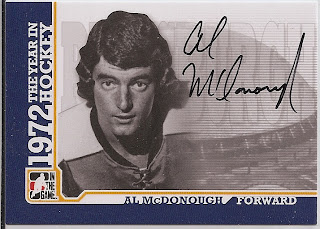 Al McDonough - Forward for the Pittsburgh Penguins (via trade for an Alton White auto).  I know, it was probably a lopsided trade on my part but I don't care.  It was a chance to add a Penguin auto to my collection and one of a player the is often forgotten when talking of the Pittsburgh greats.  He only spent the better part of three seasons on Pittsburgh and was subsequently traded to Atlanta in the midst of a career season...typical Penguins. 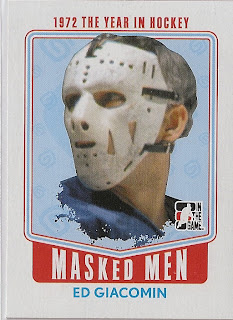 The Masked Men is a nice series that has been repeated many times.  These apparently show up once per box so they are somewhat scarce.  Here we have Ed Giacomin in his pre-Friday the 13th Jason Vorhees mask.  Can you imagine if they brought these back?  One shot from a player like Chara and the goalie wouldn't get up.  I guarantee that.

I scanned these for no apparent reason other than they are blank back parallels.  I could have done without these, myself.  I would have rather had a few base cards that were missing. 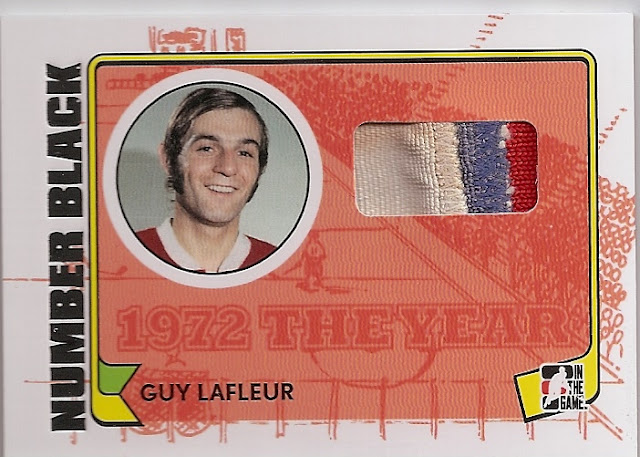 Number Black Guy Lafleur Game Used Number, 3-color, with some kind of stains on it.  The debate went back and forth as to what the stain was; sweat, blood, a combination of both?  Where is my do-it-yourself DNA test when I need it?  Frankly, though, I don't care because this card is EPIC!!  You can see the three colors all worn and beat down.  Players kept their jerseys, washing them after the game and wearing them the next time.  Not like today where players go through 100 jerseys a year or more.  The number patch is so thick, it sticks up out of the square cut out of the card to house it.

How could it get any better than that?  Well it couldn't.  But I still have one more box to open and I don't have a base set.  So... 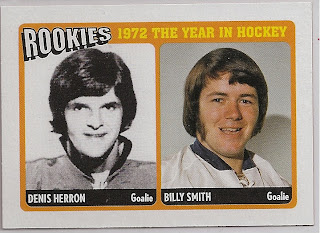 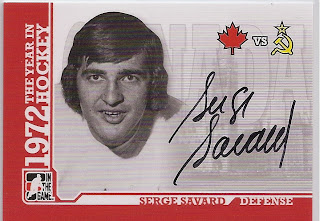 Serge "The Senator" Savard - Defenseman for Team Canada in the '72 Summit Series.  Serge is one of the top 100 best players of all time.  They guy has a gold medal, 8 Stanley Cups, and is in the Hockey Hall of Fame.  There is a rumor out there that the Savardian Spin-o-rama was his invention and not Denis' since they both had that move as part of their repertoire.  How can this not be an awesome card? 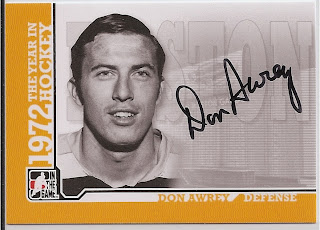 Don "Elbows" Awrey - Defenseman for Boston.  Another former Penguin, although after Boston and not for very long.  The guy was known for his defensive play and is considered by many as one of the best at blocking shots and dishing out body checks.  He played in the league for 17 years, including 2 Stanley Cup teams, and also played for Team Canada in the Summit Series. 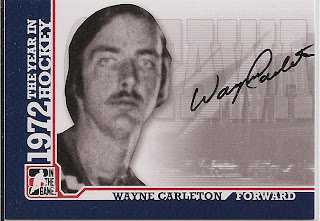 Wayne "Swoop" Carleton - Forward of the Ottawa Nationals. Named for his size and speed as a young prospect, Carleton had a ton of injuries that prevented him from having a long NHL career.  Carleton played for Boston when Bobby Orr scored the famous goal in Game 4 of the Finals.  He was traded to California a couple years later and struggled, quickly jumping to the WHA.  He became a monster scoring threat and signed one of the biggest contracts in WHA history.  One crazy story during his WHA days involves him suing Edmonton for moving expenses.  He won. 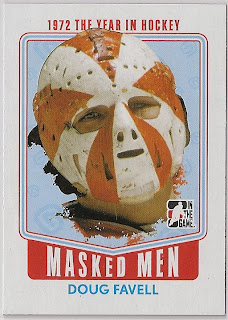 Another Masked Men card featuring Doug Favell.  When I was a kid playing street hockey, I had my goalie mask decorated just like this one.  Only I used a black sharpie to make the design.  It was awesome and so was Doug Favell.

Here are two more of those blank back cards.  You gotta love those head shots though. 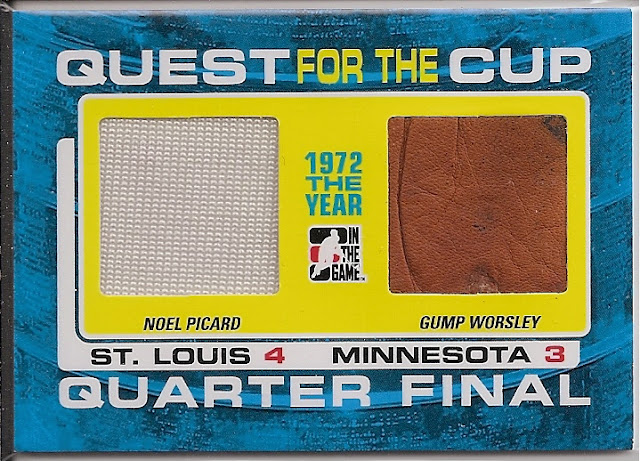 Quest For the Cup Quarter Final Dual Memorabilia Card - Featuring a jersey swatch of Noel Picard and a piece of Gump Worsley's glove.  I love ITG products.  Where else can you find stuff like this?  The answer is, NO WHERE!  Picard and the St. Louis Blues beat the Minnesota North Stars in their 1971-72 playoff game.

So two boxes down, a couple of sick memorabilia cards, some great autos, and STILL, no base set.  As I said earlier, I got the exact same base collation in both boxes.  Luckily, Sal had better luck and completed a set with all the double being the ones I needed.  We traded, I got all I needed (or so I thought...I'm one short), and he got some great singles from my doubles, including both my Coach insert cards and a few Summit Series cards.

This set looks phenomenal in an album.  I would recommend anyone pick this one up if you have any interest in a retro themed set with a chance for some great autos and memorabilia.  You can't lose with ITG products, in my opinion.
This Post Brought To You By TheRealDFG at 6:30 PM