Last year I had about a dozen or so box breaks that I posted.  Most of them were all 2009-10 hockey with a few football thrown in.  Although I didn't post everything I busted, because so many other bloggers did a much better job at it, I decided this year to try and post everything that I open.  This is not necessarily because I want to boast or brag about what I have picked up but more for my own records to look back on.  I never remember what I get out of busting packs or what I pick up through buying or trading.  So this should help clear it up.

For my first break, I'm going old school.  I picked up a hobby box of 1995-96 Select Certified Hockey.  Where on Earth did I find this?  Believe it or not, Meijer.  If you don't have a Meijer in your area and aren't familiar with it, it's kind of an in between of a Wal-Mart and Target.  Cleaner and more organized than Wal-Mart but not as tight of a layout as Target.  Regardless, the fact that a hobby box of anything could be picked up from a retail store was weird in of itself.  So of course, I had to have it. 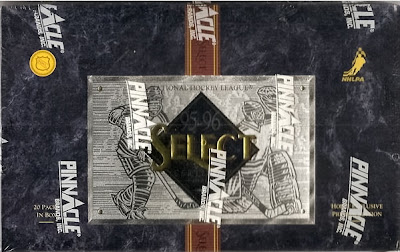 The box breakdown goes something like this:  20 Packs/Box, 6 Cards/Pack.  The set features something that back then, Pinnacle labeled the "4 Tier Chase Program.  Now, you have to keep in mind that this was the mid 90s.  This was before Game Used, before wide-spread autographs, and before every single card had to have 12 version with serial numbers.  This set featured the following:  Mirror Gold cards at 1:5 packs, Certified Future rookie cards at 1:19 packs, Double Strike cards at 1:32 packs, Certified Gold Team at 1:41 packs, and Double Strike Case Chase cards at 1:3 1/2 boxes.

The base cards feature some of the first cards to have the removable plastic coating.  Remember the debate that erupted after these cards hit the market?  To peel, or not to peel.  That was the question.  I will admit that I peeled many of these for the simple fact that they look phenomenal with the silver mirror finish.  However, as years went by, it seemed the only way they held value was by leaving the peel on.  Whether you peeled or not, there was no denying that these cards were very slick looking and featured some great photography.  Of course, much of this is lost in scan-slation (yeah I made that word up).  As we all know, shiny doesn't scan well. Here is one of my favorites, of course. 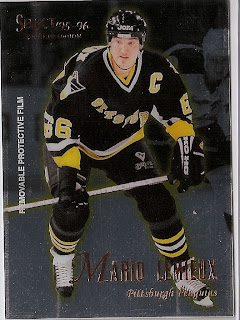 The Mirror Gold cards feature the same design as the base cards with one exception.  The front of the cards feature a gold mirror finish instead of the silver.  Also on the back in the stat line, the words MIRROR GOLD are stamped over the numbers.   I pulled 5 Mirror Gold cards out of the box which is 1 more than the production run suggests. 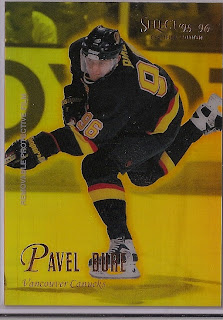 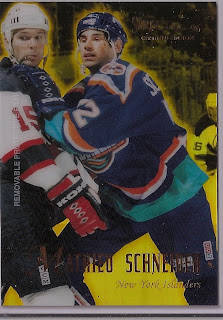 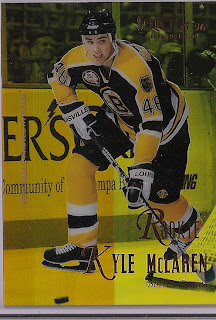 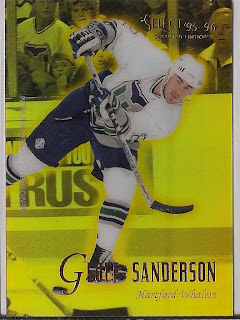 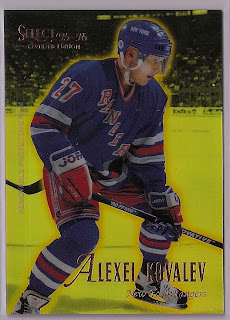 Alex Kovalev
The Certified Future cards look like the Mirror Gold cards but have Certified Future stamped on the right hand side, reading up from the bottom. This was by far not the greatest pull for this insert set but at one per box, that's the chance you get.  I could have pulled Peter Forsberg, Paul Kariya, or Saku Koivu.  But instead there was this. 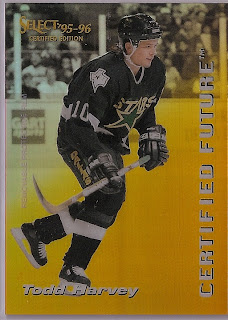 Todd Harvey
9th pick in the first round by Dallas in 1993, played for 4 different teams and was out of the NHL by 2006.  Todd is best known as the captain of the Canadian World Junior team prior to being drafted.  He had lots of offensive potential but had too many injuries to ever become a major player on a top line.  He was a pretty good agitator on a checking line though.
The last card that I pulled was one of the Double Strike cards.  I have lots of Select Certified cards in my collection but I had none of these until now.  The card features a silver metallic border that looks like a riveted plate.  The background features the same image that is on the box logo.  The player head is framed out in the center with a ribbon across with the set name on it.  I actually really like these.  They look kind of cool and would probably look great in an album.  Their are 20 of these in all and they feature many of the stars of that time including, Ron Francis, Ray Bourque, Jeremy Roenick, and of course this guy. 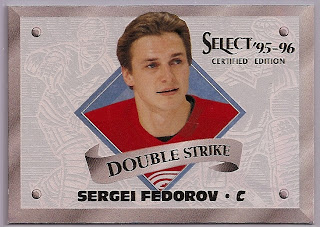 I didn't pull any Certified Gold Team cards or any of the Double Strike Case Chase cards.  I wasn't expecting to either so there was no disappointment there.  If you are a fan of mirror foil, this is a great set.  I still haven't decided whether I was going to peel it or not.  Maybe I will just let it be for now.  Oh, I almost forgot.  There were "one of seven free checklist cards in each pack".  It really does say that on the pack.
This Post Brought To You By TheRealDFG at 2:17 PM