Random Thoughts - Catching up with the world

I have been out of touch with the world for more than a week but it seems like much longer.  Have you ever had one of those moments in time where everything else just stops and you become completely emersed in whatever it is that you are doing?  That was me for the past week and a half or more.  So spending this past weekend trying to catch up on things was no easy task.  There has been a lot going on in my narrow-minded world of sports/collecting.  I figured I would take a moment to gather these thoughts. 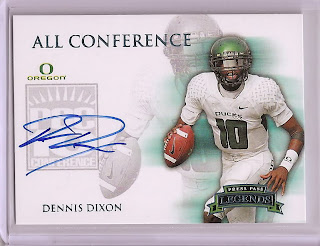 -----The Steelers didn't name their starting quarterback for week 1 prior to their pre-season game last Thursday.  It was assumed that Byron Leftwich would get the nod over Dennis Dixon and Charlie Batch.  That is, until after the game.  Leftwich apparently tore/strained/severed/obliterated his MCL and is going to be out at least 4 weeks.  Question answered...Dixon is going to get the job in Big Ben's absence.  I am kind of excited by this fact since everything I have seen from Double D thus far in both the limited time he played last year and in this pre-season leaves no doubt he can handle the job (despite the 2 picks vs. Denver).  It conjurs up memories of Kordell Stewart (only the "good" Kordell, not the "bad" one he turned into). 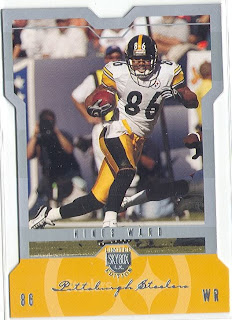 -----Also in Steeler's related news, Big Ben's suspension was reduced to 4 games by Roger Goodell after a meeting with him and the Steelers' Brass on Friday.  What does this mean?  Nothing really.  Everyone but Terry Bradshaw assumed it would result this way and I think the Black & Gold were preparing for this scenario.  As long as Double D (and C-Batch if Dixon blows it) can hold his own for 4 games, everything with the offense should work itself out.
So in lue of additional time on the bench, Ben was stripped of a share of the Team Captaincy.  That's a slight exaggeration since the job is voted on by teammates but it sure is a indication of his popularity right now in the locker room.  Instead, Hines Ward (no surprise), Heath Miller, James Farrior, and Keyaron Fox (well deserved yet big surprise) get to wear the "C"...if this was hockey.  But it isn't so they will be on the 50 yard line for coin tosses. 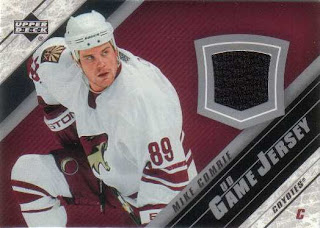 -----The Penguins signed forward Mike Comrie to a one-year league minimum $500,000 contract last week.  Is it just me, or is this a bargain-basement blow out score?  I realize Comrie has been relegated to the under 20 goal scoring club for the last few years but that was due to inactivity and "injury".  If anyone can recall this far back, in 2006-07 "Mr. Duff" scored 45 points in 65 games.  Since then, he has been surrounded by, for lack of a better word, sub-par talent in both Edmonton (where he actually played with Billy G) and NY.  Regardless, I think this is a good move by Ray Shero because it gets the Pens a net-crasher that they lost in Guerin.  It also solidifies an even strength power regardless of the line they put him on.  Plus, I can only imagine how many "crowd" shots we are going to see featuring Hillary Duff and her entourage at the Consol Energy Center.

-----The Pirates signed Jameson Taillon and Stetson Allie, two of the team's top picks in the draft.  This was followed up by the signing of a huge 16 year old prospect from Mexico, Luis Heredia.  Of course, once these players begin to develop and get into some Major League action, it wouldn't surprise me to see them shipped off somewhere for some small-pox infested blankets.  Now that the Nutting Family's spending habits have been revealed for all the world to see, there is no reason to think that they are going to change the habit now.

Spending on the team is not a priority and until it becomes evident that they are being (mis)managed as a MLB "farm" team, the league won't step in, nor should they because to them, it's a business.  Good businesses make money, bad ones don't.  It's unfortunate for the players on a team that has 0% committment to put a product on the field that can compete and win.  They built a new stadium that holds 38,496 people for regular baseball game, which I believe is still the 2nd smallest in the Major Leagues.  Even still, the average attendance is 20,115 or 52% according to estimated numbers on ESPN's MLB site.  That is basically half the attendance of the top 10 teams in the league.

And that's all I have to say about that....for now.
This Post Brought To You By dogfacedgremlin at 3:22 PM