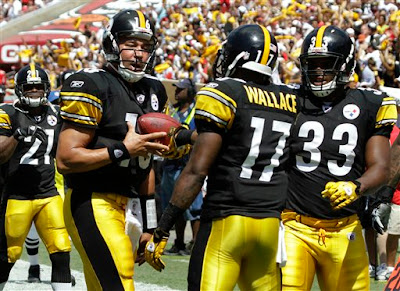 I wondered when this day would come.  Never since I started this blog has there even been an opportunity for this to occur.  But here we are...a Monday after another Steelers trouncing of an opponent, and the Random Steeler is none other than Charlie Batch. 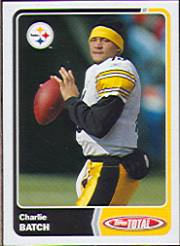 For anyone living under a rock or out of touch with football, the sheer fact that Batch was playing in the first place plays out like a soap opera.  Ben Roethlisberger is still suspended until week 6 (technically week 5 but that is Pittsburgh's bye week) for conduct unbecoming an NFL player.  Did he kill a person/animal?  No, that would only get a couple games.  Did he go on a drinking binge and decide to get behind the wheel instead of calling the league provided car service thus turning his vehicle into a deadly weapon?  No, that only gets you a 1 quarter benching.  Instead he was accused of sexual misconduct, although no charges were ever brought, he wasn't arrested, nor legal action commenced.  In fact, in the latest alleged incident, the police closed the case (in the first, there was no police case).  But that's not what this post is about.  We are all about Charlie today.

So Big Ben is corralled for at least a few more weeks.  Backup Byron Leftwich was injured in the last pre-season game of the year with a pretty brutal leg injury that caused damage to his MCL.  His return was questionable at best until x-rays came back negative on a complete tear and the prognosis was changed to a MCL sprain and his return to action was 2-3 weeks. 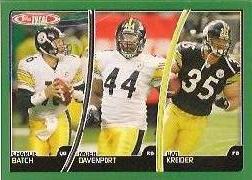 Next on the depth chart is the untested third year quarterback Dennis Dixon.  Dixon had only started one other game prior to week one of 2010 and was obviously raw.  He played well enough to not lose and the Steelers were 1-0.  Week two came along with high-hopes for Double D and his ability to manage the game but that was quickly squashed when Dixon went down with an injury.  A torn lateral meniscus is the diagnosis with a recovery time of 3-5 weeks.  So the call goes to Charlie Batch, who preserved the Steeler's lead in week 2 en rout to a 9 point victory over the Titans.

Week 3 comes along and Charlie is the only healthy quarterback on the roster (aside from Antwan Randle-El, current #3 receiver).  Batch is like that pickup truck that sits in the garage for months at a time.  It isn't broke down or in disrepair, it's just old and rusty.  It has lots of body damage and is not a pretty site.  But in the heat of the summer or the cold of the winter, it always starts right up.  It still drives like a champ and though it may not get the gas mileage you want, it gets you where you need to go whenever you need it to.

Chuck tossed three TD passes in his first start since 2007, leading the Steelers to a 38-13 victory over the Buccaneers.  For only taking a few snaps with the first team offense in the preseason, he played like a poised veteran, which everyone in Steeler Nation already knew he could.  At 35, Charlie showed he still has it, heaving the ball down field 40+ yards on two of the four offensive touchdowns yesterday (both caught by speedster Mike Wallace).  The third aerial TD came on a 9 yard toss to Hines Ward.  In all, Batch lead 4 scoring drives down the field and changed the minds of all the non-believers in the process.  I'm pretty sure this guy still has it. 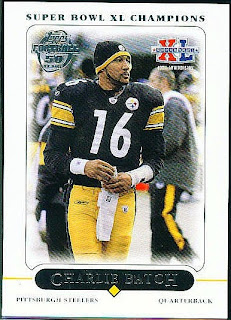 Now I'm not getting too excited over this win because after all, it was against the Tampa Bay Buccaneers.  Of course, going into yesterday's game, they were also 2-0 but with a suspect running game and a less than stellar defensive backfield, it was only a matter of time before someone exploited it.  The Steeler's defense has been playing lights-out football all season thus far and that is a big reason why the offense isn't having to sputter like everyone was expecting.  The real test for Batch is going to come this week in front of the home crowd against arch-rivals the Baltimore Ravens.  If he can play like he did yesterday against the Ravens, I'm not sure I will be too happy switching back to Ben.  We will see.

I tried to find some Charlie Batch cards to feature in this weeks's RSM but there aren't too many options in a Steeler uni.  In fact, only the three player 2007 Topps Total above resides in my collection.  Beckett's checklist of Batch cards shows he has 1,029 total cards to date with 24 rookie cards, 49 memorabilia cards, and 42 autos.  Narrowing my search reveals that of the 1,029 cards, only 14 of them have him featured as a Pittsburgh Steeler.  That is shocking considering he has been with the team since 2003.  I once considered collecting Chuck's cards until I realized I couldn't stomach having that many Detroit Lions cards in my house, even if they did feature Batch.  But you have to give it to the Pittsburgh-born quarterback; 13 years in the league, 73 games, over 10,000 yards and 60 TDs, almost all in the backup capacity.  That's pretty impressive when you think about it and most guys would have probably faded away long ago.
This Post Brought To You By dogfacedgremlin at 10:16 AM