All Good Things Must Come To An End - TMCG 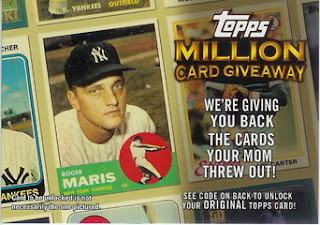 (Look, even Roger is sad to see it go.)
While trolling the blogs for my daily dose of hobby clarity, I happened upon an article over on the Beckett blog talking about the Topps Million Card Giveaway.  Normally I don't read much on the Beckett Blog at all but lately, there have been some interesting articles instead of box breaks that blatently rub it in everyone's face that Beckett receives nothing but rigged boxes.  Many of you may have already been aware of this fact and forgive me if I'm late to the party, but the TMCG is ending in six months time.

Don't believe me?  Check it out for yourself over on their website.  It is in the "Rules" section which I'm sure only 20% of the population actually read.  If you go to section 2 and scroll about halfway down the page, you will find it in big bold letters, all underlined.  Once the deadline hits, that's it.  It's over.  I wonder how many collector's actually knew this?

This isn't really that big of a deal in my case.  I have about 20 cards or so and most of them are pretty much useless to me.  I have no need for any 1987, 1992, or 2006 cards.  I do have a few Pirates of old that may be nice to add to my collection but those will be a long shot.  So in my case, Topps can keep them.  But I know there are hundreds if not thousands of you out there with some nice collections.  I even found a few MCG members with over 1000 cards in their albums.  That is unbelievable considering the amount of packs that would have to be busted to get that many code cards.  Of course, I'm sure most of them were obtained by other means.  But that's besides the point.

I think the bigger picture is how the database will become inaccessible after that point.  How many collector's/bloggers/ebayers have been using their database for their picture hosting?  How many links on blog posts and comments will go dead after March 2011?  It will be interesting to see what effect this has.  At least for those collecting football, you have the new Gridiron Giveaway to hold you over for awhile.  Oh, wait a second.  That one ends on the same day.