A Strange Gesture From An Unlikely Source

The person would be my wife.  This is the same woman that despises my collection, the idea of collecting, and the existence of sports players on cardboard.

Not too long ago, she began undertaking a project of rearranging the house and downsizing a bit.  We have had bookshelves and such that have been taking up space but their contents lacked one thing, books.  She obtained two larger wooden cabinets to store all the items that had overtaken the bookcases including her scrapbooking materials (don't get me started on how hypocritical this stuff is) and many of my card albums.  I now have a tall wooden cabinet for all my binders and have moved over many of my boxes of cards as well.

That left an entire wall of space with nothing on it.  I really have stayed out of this whole thing because it isn't worth the conflict to speak up.  Frankly, I don't really care anyway.  I had to give up my small bar that was in the corner of the room (which was really a cheap Sauder china cabinet that I modified some years ago) but that was no big deal since the amount of drinking in the house has significantly decreased over the past 7 years (notice I said "in the house").  So when she asked me what I wanted to put along the wall, I really didn't have anything to say so I kept my mouth shut.

She came home from shopping with her mom with quite a few picture frames and some wall decals and other "home-y" type stuff.  There were also two larger framed items that I carried in from the car that were wrapped in a paper bag.  After bringing them in she told me to open them.  This is what was in side... 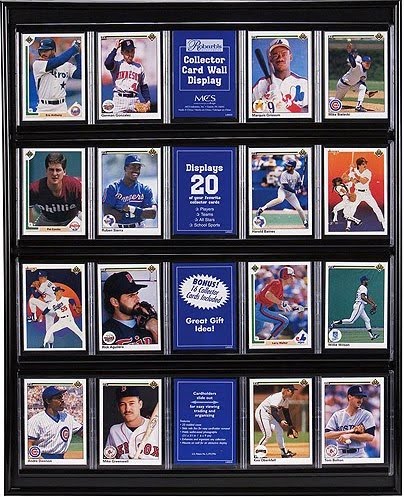 Although mine isn't the same brand, you get the idea.  A 20 Card Display Frame - made of a composite wood on the framing with plastic and metal slots.  It comes pre-loaded with cards from the junk wax era in snaptight cases.  One of them had cards just like these.  The other one was filled with 1982 Fleer and Donruss.
In fact, there were two of them.  She was actually encouraging me to display some of my collection...in public...in her house...where people can see it.  I didn't know what to say.  I was dumbfounded.  I still am.  In the back of my mind I think it might be a trap but either way, I now have two card frames that I need to fill.

So the question is, what do I put in here?  I have a few ideas but I wanted to poll the audience.
This Post Brought To You By TheRealDFG at 10:31 PM

Email ThisBlogThis!Share to TwitterShare to FacebookShare to Pinterest
Labels: card display frame, my wife surprises me