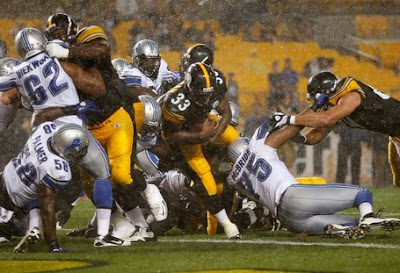 The first pre-season game was played on Saturday between the Pittsburgh Football Steelers and the Detroit Football Lions.  I got a chance to watch the game live "streamed" online.  Obviously, this was an un-televised game but was carried in replay through the weekend on the NFL Network because of their committment to show every pre-season game 17 times over.  In fact, this would most likely have been an un-televised game if it was a regular season matchup because, let's face it, it was a team that missed the playoffs last year playing a team that has missed the playoffs for 11 years.  Say what you want about them but the Lions are still well below the threshold of a contender.  They are, however, in a position to make some noise.  Pittsburgh, on the other hand, is now stuck in the middle of one of the toughest divisions in the NFL, with stacked Ravens and Bengals teams that have been designed to do one thing...beat the Steelers.  Even Cleveland could make a splash, especially with all their pent up agression over "the Decision" spilling over onto the football field.

Nonetheless, football is back!!  I can't wait for the season to start because the tiresome and mind-numbingly vapid baseball season has sucked the life out of my daily sports viewing.  When the hockey season ended, including the draft and free agency period, I thought baseball would satisfy my sports fix.  I'm sorry baseball.  I gave you an opportunity this year to Wow! me and bring me back into the fold.  I tried to get excited over spring training, the All Star game, the great pitching so far, the Stephen Stras"mania", etc.  I really tried.  I went crazy buying Upper Deck, Topps, and Bowman releases that looked great and got my attention for a short while.  I even went as far as stocking up on some of the last 5 years that I have missed.  But, I'm just not feeling it.

With the exception of two, probably three plays a game or less, there just doesn't seem to be a very marketable product on the field.  Maybe I'm not watching the right games.  Maybe I have just abandoned my once favorite sport for so long that there is no turning back.  Come playoff time, I will tune back in and see if that level of excitement can help me find a pulse.  But until then baseball, you have been demoted back to the minors alongside Indy car racing, sport fishing, and Major League Soccer.

All anyone has talked about thus far in the preseason is how the Steelers are going to handle the quarterback "situation".  With Ben serving his minimum, four game suspension during the regular season, it is going to be one of two guys, either veteran Byron Leftwich or third year quarterback Dennis Dixon.  As much as I'd like to throw Charlie Batch into that mix, his role has become much more of the mentor/tutor/coach.  I'm not saying his days are numbered, but I wouldn't be surprised to see him take on a role as an advisor or coach. 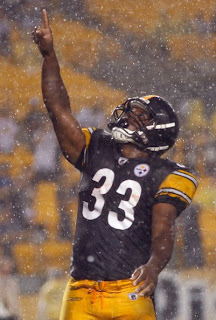 Whichever way it turns out, I think the issue being overlooked is that there were bigger problems at running back.  Parker is gone to the Redskins (and has been relegated to 4th on their depth chart) while Mewelde Moore is great on special teams and the occasional situation but is far from a feature or anchor back.  Mendenhall is a more than capable workhorse but can't be expected to be an every down back for an entire season.  Frank Summers could be a number two back on at least 9 other teams in the league but has yet to break into a starting role and is still lower on the depth chart.  Jonathan Dwyer, the highly touted 2010 draft pick has had a horrible camp and has fallen victim to injuries already.  I was excited about him as a pick but if preseason is any indication of what's to come, he may be a bust.  Enter, the "Red Zone".

Isaac Redman is my choice for filling in that position.  The second year back proved, once again, that he is a more than deserving of a shot after Saturday's performance.  If the Steeler's are ever going to get back to what the franchise was built on, I think the Mendenhall/Redman combination (with an occasional sprinkling of Summers or Moore mixed in for good measure) is what is going to get them there.  He has already shown he can be part of that tandem, leading the Steelers in preseason rushing last year and showing promise this year.  The faster paced game of today has caused the two back system to become an almost necessity in the NFL of today.  The workload has to be spread out to keep the backs from burning out.

Isaac had a pretty decent game against mostly a second team defense of the Lions, gaining 60 yards on 15 carries and one TD.  He broke a 31 yard draw play, spinning like a whirling durbish, and running over another defender which set up a field goal.  He then scored after a 51 yard pass from Double D to Arnaz Battle set him up at the 1.  He did have a fumble that was overturned by a challenge but the conditions were less than desireable with a soaked field due to torential downpours all evening in Pittsburgh (I know, excuses, excuses). 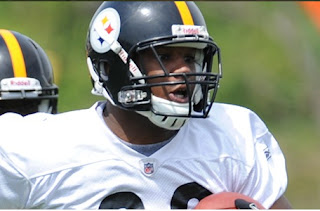 As for cards featuring the stable of Steeler running backs, thus far Redman has no cards that I know of so there aren't any that I can post here.  I'm sure that will change this year with some football releases, hopefully in Topps.  In comparison, Frank "the Tank" Summers has 38 cards listed on Beckett's checklist.  Moore has well over 500 total cards but only about 10 that feature him as a Steeler and four of those are printing plates from 2009 Topps.  Dwyer already has 142 cards despite being drafted less than 6 months ago.  This is a prime example of the perception of scarcity the card companies manufacture.  I will expound on that more in another post.  Mendenhall?...he has over 1,500 cards, over 600 of them are memorabilia cards and almost another 600 are autographs.

Regardless of what the end results are come Week 1, I think it's safe to say that Pittsburgh's running game will be back.
This Post Brought To You By dogfacedgremlin at 2:31 PM